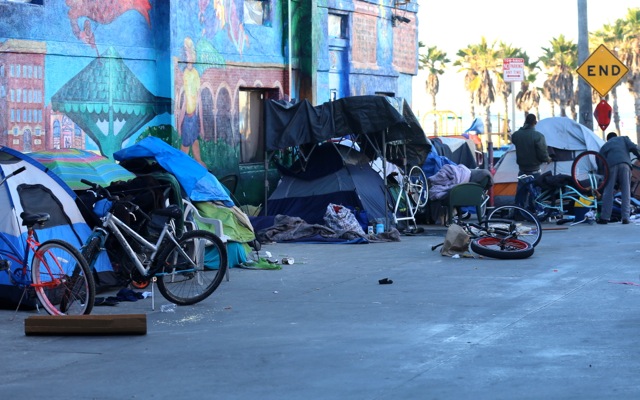 This has been a difficult column to write.  For many years I have supported the LAPD and its mission to make our community safer.  So, it is with reluctance that I address the LAPD’s shameful abandonment of the residents of the Paul and Ada Safran Assisted Living Center to the depredations of the homeless encampment next to the Center.  The LAPD is joined in this deplorable story by the malfeasance of City Attorney Mike Feuer and the City’s Department of Recreation and Parks.

The Center is located on the north end of Ocean Front Walk and houses 63 vulnerable, low income seniors, some of whom suffer from dementia and limited mobility.  They have been held hostage for years by the conditions around their building, afraid to venture onto the Boardwalk due to the large number of homeless campers who have occupied the narrow dirt lane that runs on the west side of the Boardwalk from Rose Avenue to Navy Street.  The seniors also face a danger posed by transients who sneak into the Center when the garage door is opened for vehicles to drive into the subterranean parking area.

Almost all of the senior residents avoid walking in front of their own building due to fear of being yelled at or accosted by the denizens of the adjacent homeless encampment.  They – and other residents on nearby walk streets – are also frequently kept awake at night by the loud raging of these drug and alcohol-fueled campers.  And napping during the day is impossible due to loud amplified music, exceeding the Municipal Code sound limits, coming from bands which illegally store their equipment along that stretch of the Boardwalk.

At several meetings I have attended at the Center over the last four years, residents of the Center have shared their fear and discomfort with the dire situation facing them every day.  At the same time they asked that their names not be used because they are fearful of retaliation by the transients who have already vandalized the Center on several occasions.

The underlying problem is the failure of the Department of Recreation and Parks to enforce Municipal Code 63.44, which states that “No person shall Camp or engage in Camping on a Beach, except in locations designated for such purposes, or erect, maintain, use or occupy any Tent…”

The Code defines camping very broadly:  “using a Park for living accommodation purposes, as evidenced by: (a) remaining for prolonged or repetitious periods of time, not associated with ordinary recreational use of a Park, with one’s personal possessions or belongings….and (b) engaging in one or more of the following: sleeping, storing personal possessions or belongings, making a fire, cooking or consuming meals….”

The ordinance’s preamble notes that “unregulated camping and tents in City parks and beaches create unnecessary, excessive and blighted activity which is detrimental to public health, welfare and safety, and contrary to public interest, and harms nearby residents and diminishes the public’s enjoyment and use of City parks and beaches for recreational purposes.

So, given these broad definitions, none of the current camping and storage of assorted items seen along the Boardwalk is legal.

The failure to enforce 63.44 is exacerbated by the LAPD’s urging the campers to violate the City’s ban on sleeping on streets and its failure to enforce minimum federal and City protections for the disabled (which includes some of the Safran seniors).

At a recent meeting of residents at the Center I listened in disbelief as the head of the LAPD Venice Beach Detail told the residents that Beach Detail officers regularly direct the homeless to camp at night on the actual tarmac of Ozone Avenue, instead of the narrow sidewalk adjacent to the Center and residents’ windows (camping on sidewalks, not streets, is temporarily allowed from 9 PM to 6 AM under the Jones Settlement).  This includes allowing transients to occupy parking spaces on the street.  The LAPD Sergeant said camping in the street is preferable to the sidewalk because it puts the campers a few more feet away from the seniors.

It also creates a much larger area for camping, thus attracting more homeless, which results in more noise, mischief and vandalism (not to mention a loss of parking for residents).

If Councilman Bonin and City Attorney Mike Feuer would just advise the LAPD to enforce the ban on camping on the street itself and the requirement under the Americans with Disabilities Act that passage be maintained on the nearby sidewalk for anyone using a wheelchair or walker, very few campers could congregate in this location.

(Since all the walk streets are streets under City code and must remain clear for fire and emergency vehicle access, the LAPD can also legally keep campers from occupying the walk streets.)

Similarly, if Recreation and Parks staff, with LAPD’s help and proper advice from the City Attorney’s Office, would stop the camping along the Boardwalk, the encampment opposite the Safran Center would largely dissolve.  Certainly this could be accomplished over a number of weeks, allowing time for the LAPD’s Homeless Task Force, the Teen Project, St. Joseph Center and LAHSA outreach staff to counsel the campers and help those who want to move to shelters and transitional housing or accept transportation to their hometowns out of state.

Maybe then the seniors – and walk street residents – could enjoy the Boardwalk and beach that lies just outside their front doors – and finally get a good night’s sleep.

Mark Ryavec is president of the Venice Stakeholders Association.  In 1987 he served as a consultant to Tom Safran, the developer of the Safran Center, which is named after Tom’s parents.