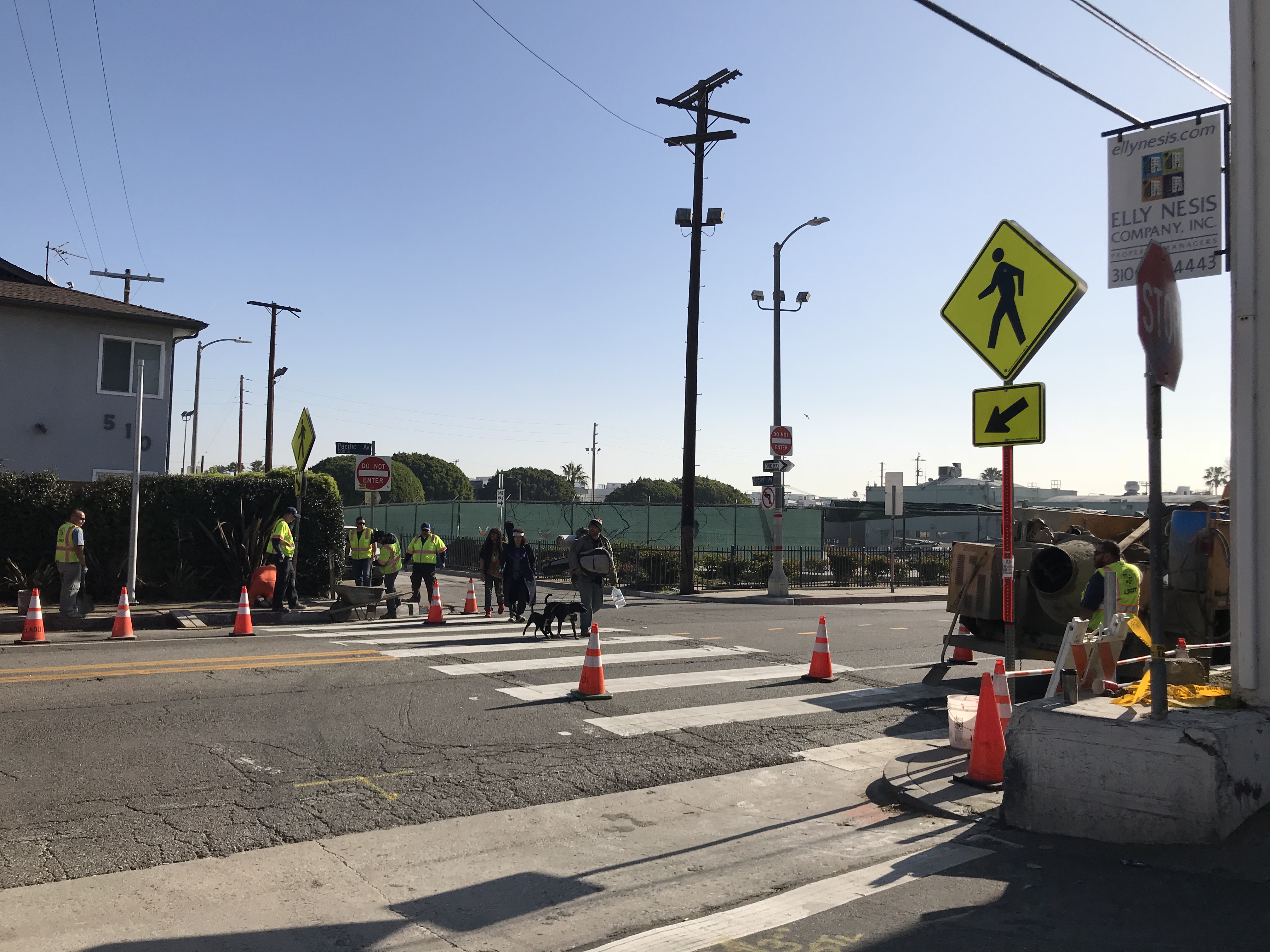 Councilmember Mike Bonin is on a mission to help the Los Angeles Department of Transport (LADOT) cut through red tape and overcome the bureaucratic hurdles that are hindering the installation of pedestrian safety measures citywide.
This is good news for Venice neighbors who are sick of seeing people injured and killed at one local crosswalk. On Friday morning, February 2, LADOT crews began work installing new poles at the deadly Sunset & Pacific Avenues crossing. Workers will add a blinking beacon that alerts drivers to the crosswalk within the next two weeks.
Councilmember Bonin’s Deputy Cheif of Staff, David Graham-Caso, wrote in an email on Friday, February 2, “I’ve got some good news to share: installation of the pedestrian-safety flashing beacons at Sunset and Pacific Avenues in Venice began today.”

The safety upgrades are a relief for Virginia Wedemeyer who lives near the crosswalk. “I feel like a weight as lifting. Knowing people will be safer. It’s hard to describe the relief now that’s it going in. I didn’t realize the extent I was aware of people’s lives being in danger, right out my window,” she told Yo! Venice.

In October last year, a car hit and killed 40-year-old Damon Shear of Los Angeles while using the crosswalk to get across Pacific Avenue. Shear was not the only person to die. Many others have been injured and Wedemeyer said the sound of squealing tires is a constant alert to every near miss.
As published in a report, that was soon removed from the link Yo! Venice shared in October 2017, LADOT determined the crosswalk was dangerous in 2014. The report stated, “that marked crosswalks alone are insufficient for the combination of traffic volumes, number of traffic lanes, and speed of traffic on Pacific Avenue…”
Tim Fremaux, Transportation Engineer for the City, explained to Yo! Venice in October last year that “some “red tape” associated with the federal funding” had delayed the implementation of safety measures at the crosswalk and others throughout the city even though funding had been allocated. That tangle of red tape got worse in recent weeks with a patent dispute forcing the federal government to decertify the flashing beacons planned for the crossing. “This impacted dozens of pedestrian safety projects around the city, and likely thousands around the country,” wrote Graham-Caso.
The latest hold up left Councilmember Bonin “unwilling to accept any further delays,” explained Graham-Caso. “Councilmember Bonin requested LADOT immediately install a different flashing beacon at Sunset & Pacific, and submitted legislation calling on LADOT to develop a plan to expeditiously install different pedestrian safety measures at other crosswalks across the city,” he wrote.
By Melanie Camp February 3, 2018
Tags: featured in Opinion
Related Posts