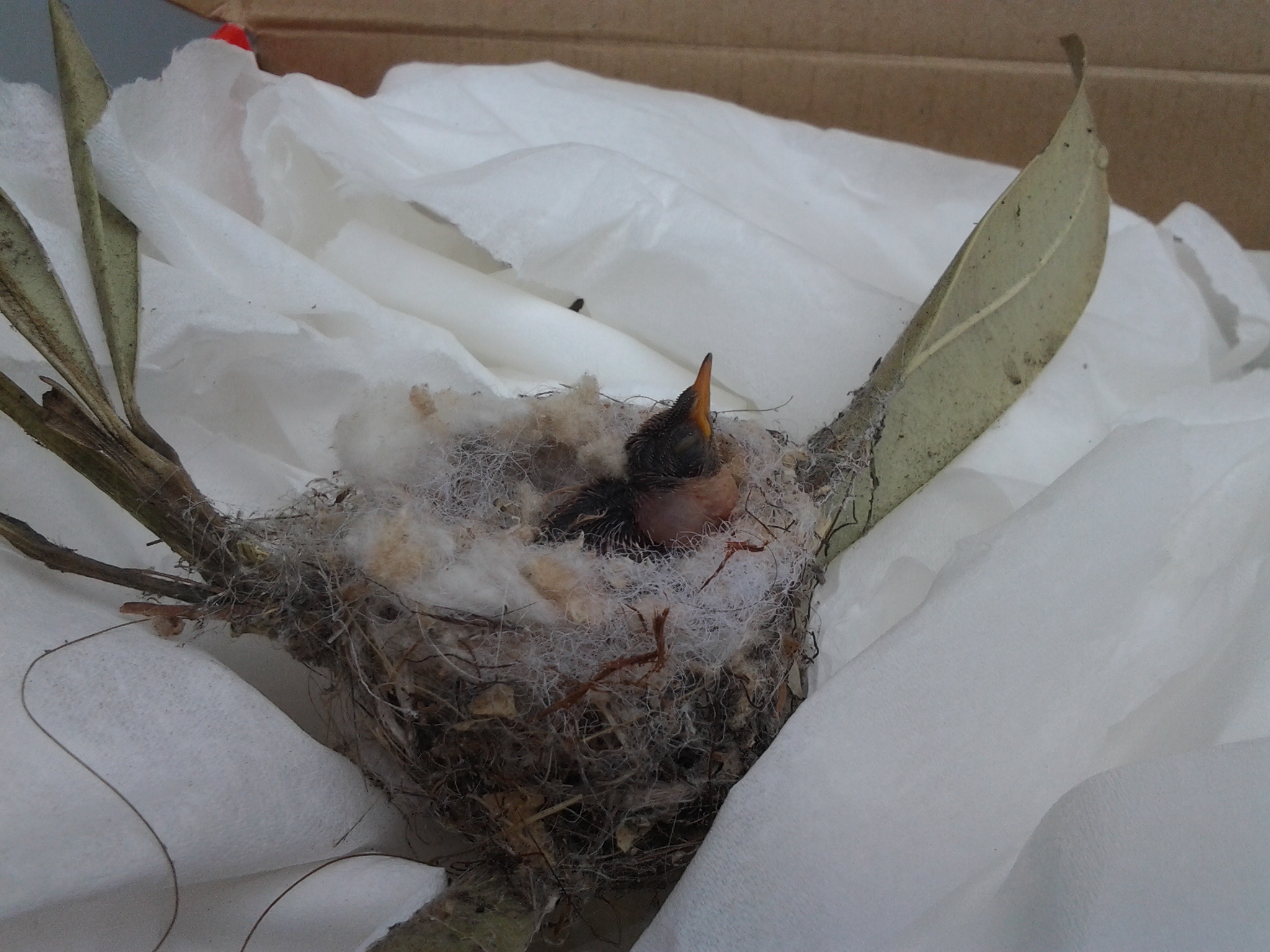 Trying to save a baby Hummingbird. Photo: V.

Sometimes I feel living in Los Angeles is just one big recurring nightmare.  Our historical drought concluded with cataclysmic flooding, literally and figuratively.

But, the Hummingbirds have returned to L.A.

Hummingbirds are The Fastest Things On Wings.  The average Hummingbird weighs less than a nickel.  They live on the brink of starvation every three to five hours.  A Hummie needs to consume the human caloric equivalent of 1,300 hamburgers every day just to be able to do what they do.  Our technologies can’t match the science behind their motion, acceleration, or deceleration.  Hummies beat LAPD helicopters:  a Hummie can hover, fly sideways, and even fly backwards at the split-second of a whim.

Nature’s Cirque du Soleil is going on in my yard right now.  A male Hummie will spend days doing 60 m.p.h. dives from heights of 70 plus feet, trying to impress the girls for some booty.  A female will eventually give him the time of day:  she is impregnated mid-air in a matter of three to four seconds, and then she’ll tell the guy to get out of her way and stay away.  She already knows he won’t have anything useful to do with her again, aside from generously allowing her to eat within his declared territory.  The male will continue to mate with more females.

Hummingbirds consume so much energy during the day that, when they sleep, they really check out.   Hummies sleep upside-down, hanging off branches.  If you ever come across a Hummie who appears to be dead, do not touch it:  he/she is merely recharging in a very deep state called “torpor.”  It can take 12 hours for them to wake up and face another day of doing what they do best.

A Mamma Hummingbird will never abandon her nest or eggs.  She’d rather die.  I’ve watched Hummies defend their nests against predatory birds dozens of times their size.  Hummies sometimes re-use last year’s nests.  A Mamma will often construct several nests at the same time in case of unexpected variables arising.  When loud construction began in my back yard, the Hummie who’d been watching for two days outside my office window decided instead to move to her alternate nest above my front door to lay her two eggs.

Hummingbirds are protected by the Migratory Bird Treaty Act.  The U.S. Fish & Wildlife Service will fine tens of thousands of dollars if you mess with even one bird or nest.  There was an all-out war here at my “bootleg unit” when poorly-scheduled landscapers were called in to destroy the yard.  The argument didn’t last long.  V = 1.  Slumlord = 0.

Hummingbirds are remarkably reactive and intelligent.  They will remember you and your face.  Some fly a 3,000-mille journey from Alaska to Mexico.  They remember people and feeding grounds they’ve encountered.

I tried to rescue a fallen Hummie fledgling last summer.  It was God-awful finding him on my staircase in the rain on my birthday, twenty feet below the nest I’d been watching since day one.  He and his sister had mites, and, in their blind discomfort, she had accidentally pushed him over the edge.  There was no way to place him back up there because the nest had been built so ingeniously out of reach.

The fledgling had suffered internal injuries from the two-story fall, but nobody could possibly know that until after I had driven like a madwoman all through Hollywood, West L.A., and Palos Verdes to find a Veterinarian qualified to deal with the tiniest bird on earth riding along, held against my chest in a Tupperware.  As we passed LAX, he opened his eyes three times and looked at me.  I was the first and last thing he ever saw.  He died overnight at a Hummingbird sanctuary, but he was warm and safe and surrounded by dozens of other rescues being rehabilitated before re-release into the wild.

For some time now, I’ve been struggling for a will to live.  Things are not going well.  I can’t seem to shake my supposed friend/lover having put me out with the trash on New Year’s Day.  The day before this past Super Bowl, I stopped at Ralphs for groceries.  A cashier sneered at my Pats hoodie and laughed, “How does it feel that everybody in the world hates you right now?”  I kept my mouth shut and swiped my EBT Food card.  My financial books are beyond cooked.  There is no credit left to borrow.  There are no savings to cover next month’s raised rent.  My only client recently restructured their management.  My three new bosses made a massive mistake with one of my project files.  “Blame the contractor!”  They fired me from my only somewhat-consistent income of the last five years.  I feel trapped in a downward spiral.  I’m rearranging deck chairs on the Titanic.

I stood on my porch last week, trying not to cry too early in the day.  Out of the blue, last summer’s Mamma Hummingbird reappeared in my yard.  I knew she was “my” same Hummie, because she flew several times above my doorway to have a poke around her old nest and to survey El Nino’s aftermath.  She then buzzed down to me and hovered 24 inches directly from my face for a considerable amount time.  She was saying hello.  She remembered her fallen son and the 1.5-day rescue attempt.  She remembered me.

Mamma will mate again.  She’s already building a new nest, this time directly outside my front window.  I’ll have prime seating to watch firsthand her new twins to come.  I’ll get to watch the smallest eggs in the world progress through the first takeoff.  Mamma will fly thousands of miles again.  She’ll cross the Gulf of Mexico nonstop, barely powered by mere fumes of rapidly dwindling calories.  Again.  Because this is what she does.

A Hummingbird in Los Angeles put me right straight back into my place.