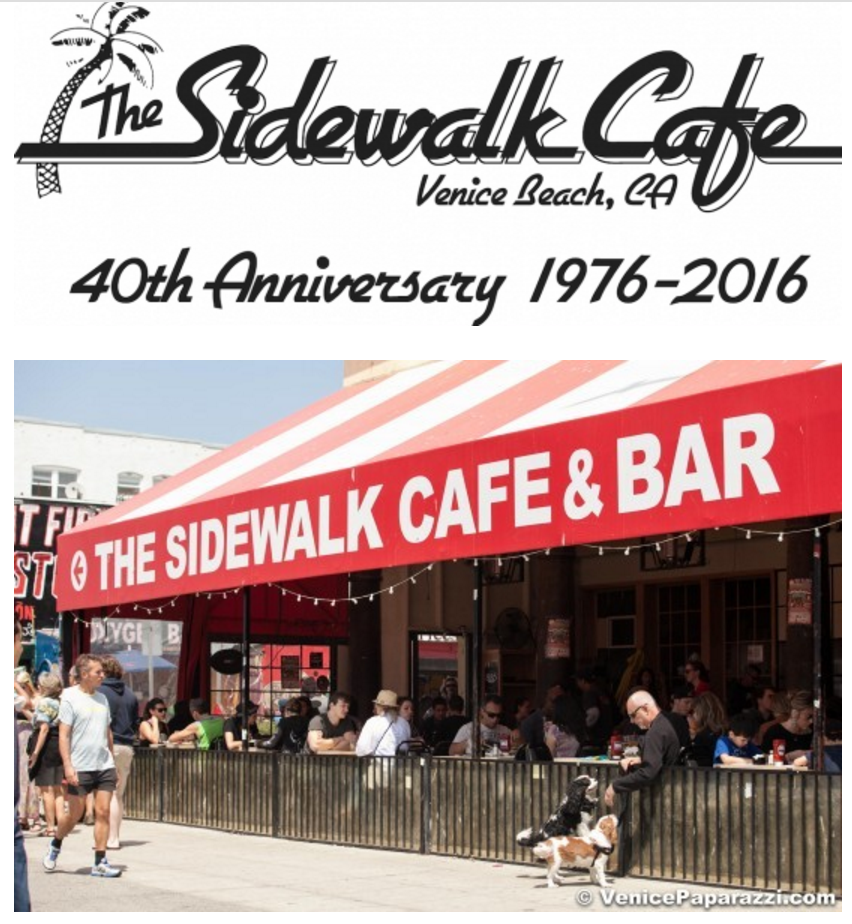 The Sidewalk Café has given locals and tourists a front row seat to the craziness of the Venice Beach boardwalk for 40 years. Tonight, this Friday September 23rd, the party is on.

Bust out your 70’s gear and honor the era it all began when, in 1976, Mary Goodfader’s bookstore, Small World Books, lost its lease in Marina Del Rey. Bob Goodfader, while bicycling on the bike path, saw the building and called the phone number graffitied on its front. The Goodfaders and their friends, Walter (Skip) and Penny Dixon bought the building as a new location for the bookstore. Bob and Skip decided to open a small takeout place on the side, not in use by the bookstore. The eatery was such a hit that they expanded it into a patio restaurant.

25% of all sales will support local non-profits, the Homeless Task Force and safe Place for Youth. Barry Minniefield from the Voice Season 8 will be performing live music and Venice Paparazzi will be snapping all the red carpet action.

The building that houses the Sidewalk Café was one of the last of Abbot Kinney’s Venice buildings. Originally designed to be four stories tall, only the first floor was ever built.

Throughout the years the Harrah family, the gambling dynasty of Harrah’s Hotel and Casino’s, have owned the building and in the 1950s and early 1960s the building comprised artist studios and served as a crash pad for beatnik writers and poets such as Jack Kerouac.

Like any Los Angeles landmark, the café has been featured in movies and TV commercials.

Tonight’s party kicks off at 7pm.