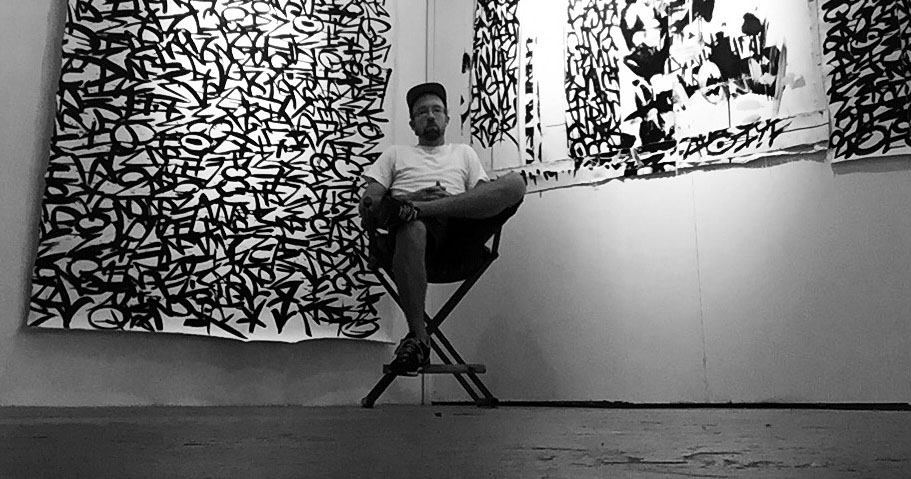 When Venice artist Bisco Smith sets out to create a new work, he blends graffiti deconstruction, graphic design, and fine art to capture the untamed energy and uncharted environments of street style and expresses a sense of duality, spontaneity, and movement.

He describes himself as an artist steadily in search of his own personal truth and most raw expression.

The aim? To blend his experiences in life with the energy in the moment and create work that moves, questions, and inspires.

Living in such a vibrant community has given him many opportunities to show off his art. He is a partner in the WNDO space in Venice, along with Jim Budman and Jason Drake. Budman has kept Budman Studio in the same building for more than 20 years while Drake is a creative collaborator that he has worked with for almost 15 years in both New York and LA.

“All of us keep our studios there, hold art based events, and show work of ours and artists we dig,” Smith says. “The space crosses generations, and disciplines. We like to say ‘anything can happen in the WNDO.’”

Spending time on the side in New York City and Miami, he is definitely bicoastal when it comes to exhibiting his works. This year alone he has been part of six exhibitions on the East Coast.

Smith says it was the whole energy of street and graffiti art that first drew him to painting as a teenager.

“I was young, and I was rebellious; skateboarding and graffiti go hand in hand,” he says.

Despite Smith’s rebellious roots, he ended up attending art school for graphic design. This helped refine his artistic technique.

His laid back approach to life and his fierce desire to express himself without strings attached helps shape his unique art style.

Smith tries to capture the moment while painting. He sees painting as a way to “set up to control my chaos.”

He says he makes sure to paint daily, or at least as often as he can. After all, he likes to leave time in his day to live life. He knows that painting is an important mode of self-expression for him.

“If I don’t make something, I don’t feel right,” he says.

The process of painting for Smith, unlike the abstract ways of finding inspiration, is much more concrete.

Although it largely depends on the size of the piece, preparation and painting are two different processes that have a profound effect on the timing of completion of a piece of work.

With that in mind, he says it takes anywhere from one to five days to complete a piece.

Smith has advice for artists: that focuses on the energy and intention of the artist.

“What you put your energy into, that’s what you get back,” he says.
Smith emphasizes a bold, and ambitious mindset with art.

“There’s a lot of ways to make what you want work,” he says.