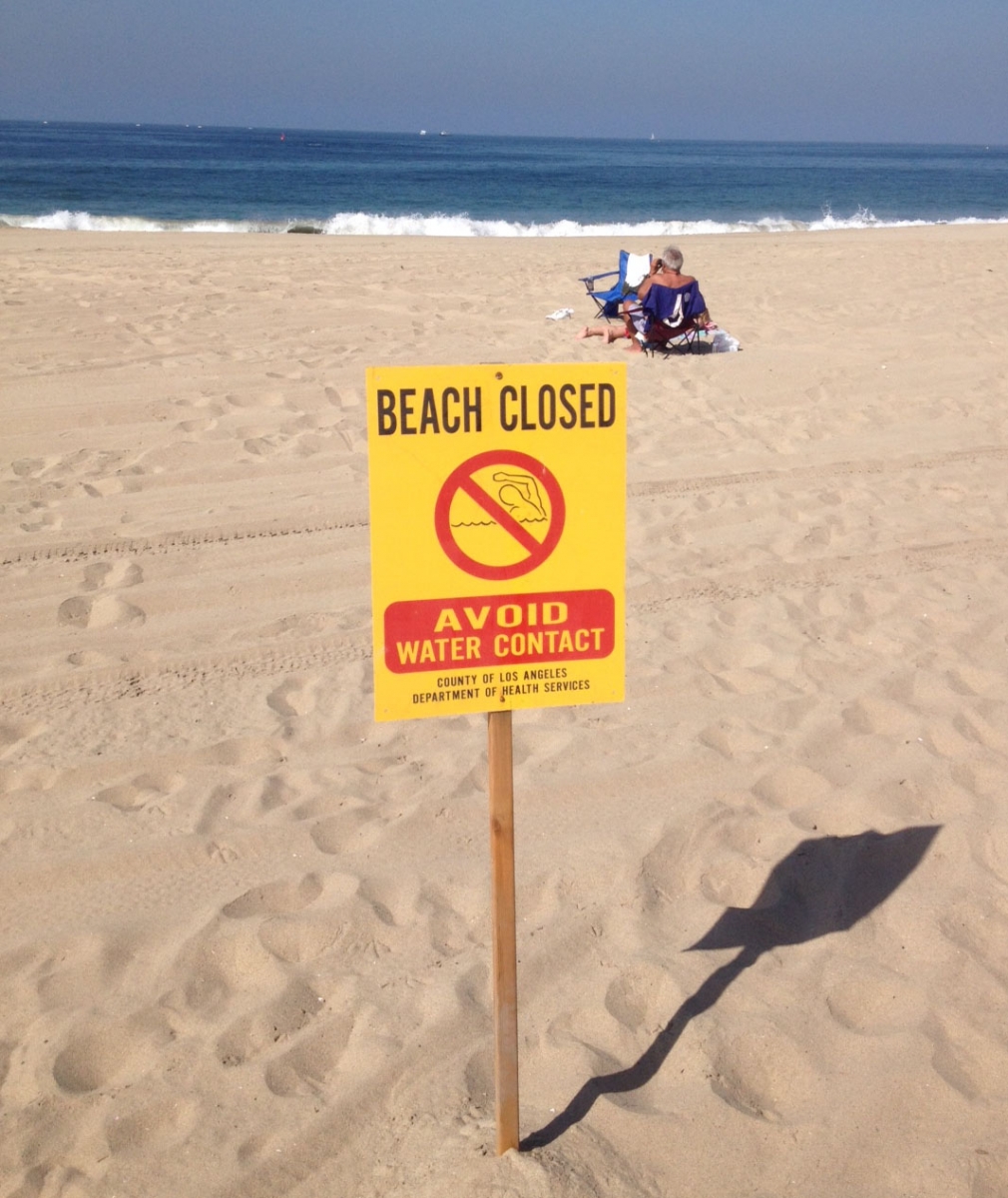 On Sept. 15 it rained in Los Angeles. It was the first big deluge since February and this “first flush” of the season was a good one.

Emergency crews rushed to multiple swift water rescues, but it wasn’t just people caught in the gush of the storm’s waters.

Months of grease and grime was washed off the streets of Los Angeles, into the river, into storm drains, and flushed out into the Santa Monica Bay. Riddled with bacteria and toxins, the runoff resulted in a surge in the ocean’s bacteria levels.

“We have a low end of the scale and a high end,” said Leslie Griffin, a data analyst at Heal the Bay. “The readings we were getting on bacteria levels after the rain were so far past the high end that we could not quantify them. The water quality was that bad.”

It is not unusual for bacteria levels in the Bay to rise after rain. Heal the Bay always recommends beach-goers avoid the ocean for up to three days after any storm. However, the most recent post storm bacteria levels were off the chart.

Before the Sept. 15 storm, water quality levels had been consistently good for sometime. Heal the Bay explained that the drought was a major contributing factor, as record low rainfall reduced “the amount of polluted runoff funneled into our seas.”

A week after the storm, reports of medical waste and refuse washing up on Dockweiler Beach began to trickle in. Ultimately the beach was ordered closed after cleanup crews worked throughout the night on Sept. 23, and over the days following, cleaning the beach and clearing debris that included tampon applicators, hypodermic needles, and condoms.

A stretch of the beach at El Segundo was also closed and the levels of bacteria at both beaches read too high to be safe. All in all, cleanup crews collected over 200 pounds of debris from the beaches in just a few days.

Officials from Los Angeles Sanitation, a division of the city Department of Public Works, said it was likely the previous week’s heavy rain had inundated systems at the Hyperion Water Reclamation Plant in Playa del Rey and forced a discharge through a pipe that had not been used in a decade, causing the resulting tide of trash.

Heal the Bay said the reason bacteria levels can rise when the plant flushes water through the one-mile pipe is because, amongst other things, the nutrient-rich wastewater can help feed harmful algal blooms in the shallow, warmer waters.

According to LA Sanitation the debris could have been gathering in the unused pipe for close to 10 years, and also “the peak storm flow from last week may have impacted the screening process filtering these types of items and was compounded by the first flush through the one-mile outfall.’’

Griffin explained that while Hyperion has a state of the art wastewater treatment system, this system is designed to break down biosolids, not trash.

“The plant does a good job disposing of biodegradable waste but the issue begins at home,” Griffin said. “Medication and plastics are things that should not be flushed down the toilet. Hyperion doesn’t have the resources to process these things.”

The rule of thumb; if you put it down the drain – sink, toilet, or storm water drain – keep in mind that it is going into the ocean.

The Hyperion treatment plant and the first flush of the season were two coinciding issues that both drew attention to a problem that exists in our drought-dry Los Angeles; why are we wasting our water?

The biosolids extracted via the wastewater treatment process at Hyperion are ultimately turned into a heat dried fertilizer that is sent to Green Acres, the City of Los Angeles’ farm. The farm grows crops such as corn, alfalfa, and wheat. The harvested crops are sold to dairy farms across the state for feed.

“Years of research have shown that land application of biosolids is safe,” said LA City Sanitation. A safe, and wonderful, example of a cycle where waste is not wasted.

LA City Sanitation said that “biosolids are monitored for metals, pathogens, organics, and inorganic constituents. Groundwater monitoring and soil analysis are performed to ensure proper nutrient management for specific crops planted. Thirteen plus years of data exists and shows that groundwater parameters remain consistent, and are well below the regulatory limits since land application of biosolids at Green Acres.”

So, if treated poop is safe enough for the cows that give us milk then why is there such a stigma surrounding the water that is reclaimed in the process?

“The wastewater that usually goes out into the bay is, in many cases, actually cleaner than the water in our taps, and we pump close to 250 million gallons of this water, each day, into the ocean,” says Griffin. Currently only a small percentage, about 15 percent, of Los Angeles’ wastewater is recycled.

Griffin says there are a few things that get in the way of Los Angeles being able to tap this valuable resource: “infrastructure, money, and public perception.”

Griffin said it is a matter of investing in the infrastructure, saying that the large amount of money that California spends on bringing water into our drought addled State would be better spent on recycling the water we already have.

“If people realized how much we spend on bringing in water from outside of California, the relative cost of building the infrastructure to treat the water we already have is not so huge by comparison,” Griffin said.

The biggest block to the flow of reclaimed wastewater is public perception.

“If you think about it, all water on our planet is recycled,” Griffin said.
Before being flushed out into the bay, the wastewater at Hyperion goes through a series of physical, biological, and chemical treatments. The process is a “secondary treatment” that successfully removes a large amount of the organic matter contained in the wastewater, making it safe for many applications such as irrigation or dual-plumbed systems.

Already the City of Santa Monica has been successfully recycling a percentage of storm water and urban runoff. The Santa Monica’s Urban Runoff Recycling Facility, otherwise known as the “SMURRF,” is an example of how waste water does not need to be wasted.
Runoff water is diverted from two of the city’s main storm drains into SMURRF where it is treated. It removes pollutants such as trash, sediment, oil, grease, and pathogens.

While it doesn’t happen anywhere across Los Angeles or at SMURRF, treating the wastewater to an even higher level would allow it to be pumped back into local aquifers, where it would be naturally polished prior to being pumped out for consumption.

For now, a goal is to see recycled water used for irrigation, dual-flush systems, water features, and fighting fires; whereby seeing Los Angeles put an end to flushing this precious resource down the drain.