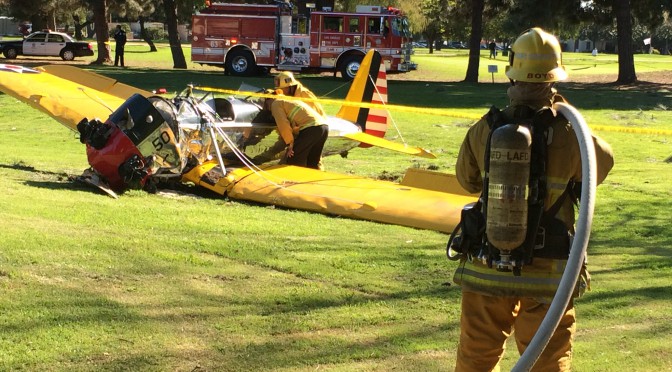 Federal investigators said today the reason for the crash was a loose carburetor jet.

The 73-year-old “Star Wars” and “Raiders of the Lost Ark” actor
suffered severe head injuries when his single-engine Ryan Aeronautical ST3KR crashed on to the golf course near the airfield around 2:20 p.m. March 5. Ford reported a loss of power in the plane shortly after takeoff and tried to return to Santa Monica Airport, but never made it.

According to a report released by the National Transportation Safety Board, the main metering jet in the plane’s carburetor  “was unscrewed from its seat and rotated 90 degrees.”

“The unseated jet would have allowed an increased fuel flow through the main metering orifice, producing an extremely rich fuel-to-air ratio, which would have resulted in the loss of engine power,” according to the NTSB. “It is likely that, over time, the jet gradually loosened from its seat, which allowed it to eventually rotate 90 degrees. No further mechanical failures or malfunctions were revealed that would have precluded normal operation.”

According to the report, the carburetor was rebuilt during the plane’s restoration 17 years ago, and there was no record of the carburetor jets being inspected since, “nor was there a requirement to do so.”

The NTSB also noted that the front and rear seats of the plane “were
equipped with non-factory-installed shoulder harnesses,” which became dislodged during the crash because the bolts were not reinforced.

“The lack of reinforcement allowed the attachment bolt, washers and stop nut to be pulled upward and through the seatback structure during the impact sequence, which resulted in the pilot’s loss of shoulder harness restraint,” according to the report. “It is likely that the improperly installed shoulder harness contributed to the severity of the pilot’s injuries.”

Ford recovered from his injuries and made his first post-crash public
appearance during last month’s Comic-Con in San Diego.