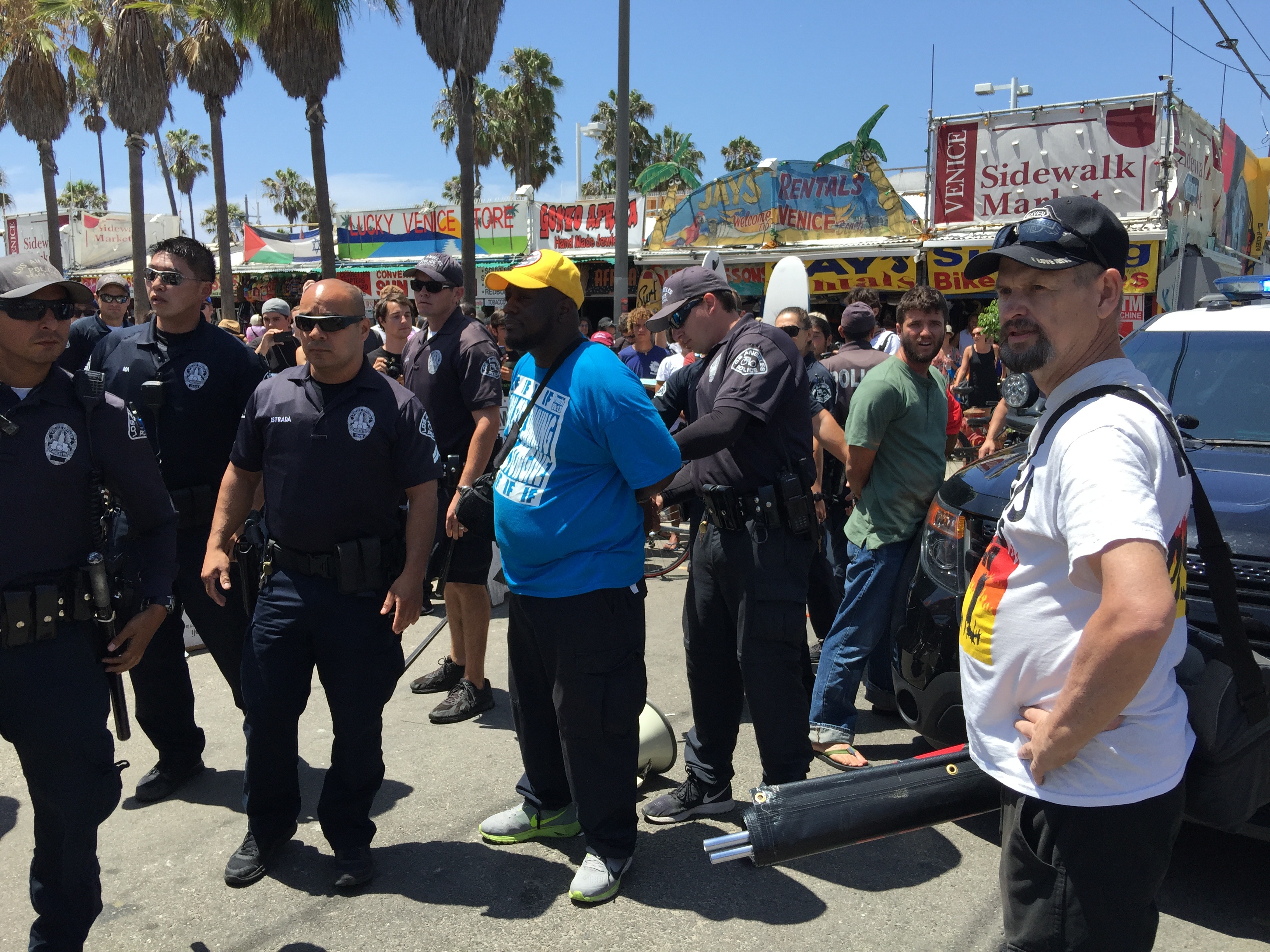 There is not one cloud. Draped overhead the languid palm trees and a sweaty crowd that clogs Ocean Front Walk lays a clear blue sky. You can’t fight the flow of people and weaving only puts you face to face with the oncoming mix of those fighting their way back in the opposite direction.

Organizers of the 39th Annual Festival of the Chariots Parade had estimated Sunday’s crowd would swell upward of 50,000 people. The park at the end of Ocean Front Walk at Windward Ave. is crammed.

Priya Vani and Radha Luna had traveled down from San Francisco for the day’s event.

“The festival is wonderful and I just want to share Krishna Consciousness to everyone I can,” says Vani.

Hosted by the International Society for Krishna Consciousness, each year the free festival attracts a massive crowd. First initiated in 1977 by Bhaktivedanta Swami Prabhupada, who had instructed his disciples to hold a grand parade and distribute free vegetarian food as an offering to God, to share the love of God, as a part of the tradition of India.

Both Vani and Luna try to come every year to the festival in Venice.

“I like it because there’s people that come who don’t know a lot about it and they come and ask lots of questions,” says Luna.

Vani adds that the diversity of Venice’s tourist population increases the reach of their message.

“The different cultures, just connecting with different people from around the world, is very fascinating,” says Vani.

Three giant chariots covered in garlands of fresh flowers, multi-colored flags, and helium filled balloons tower amongst the festival goers. The motor-less chariots had been pulled by a singing and dancing crowd of volunteers from the Santa Monica Civic Auditorium to Venice Beach that morning. Now happy devotees and curious beach-goers wander from booth to booth, sampling Indian food, participating in free yoga classes, and learning about the Hare Krishna movement, which is a branch of Hinduism.

Mediative devotional music floats across the crowd from the stage. A woman in white dhoti pants, a green, silk sash draped from her hips, glides from one side of the stage to another. Her head tilts upward following her hands that reach to the sky with a symbolic offering.

On the boardwalk, at the edge of the park, stand a group of protesters. They comprise a handful of men holding signs with messages like “A winner puts his hand on a bible, not the Koran, not the book of Morman,” another with an anti-sodomy message.

Their leaning is toward a more extremist version of Christianity.

Vani and Luna have moved away from the Festival of the Chariots and now stand confronted by the main preacher, their sari skirts skim the dirty boardwalk.

“You’re drawing attention to yourselves with those bright colors,” says the preacher speaking through a megaphone even though the women are mere feet away.

Vani and Luna may have come to Venice to share their message, but so has the preacher.

The preacher widens his attack.

“Most of the women here today are dressed like harlots,” he says, his voice amplified by the megaphone. “This is the beach, not a night club,” he says as groups of women in summer dresses, others wearing cut-off shorts and bikini tops, wander by.

Insulted, one of the women stops.

“You need not only self respect, you need Jesus Christ in your life,” says the preacher.

“They’re here every year,” says Garrow, who had showed up to protest the protesters. He had been standing alongside them holding his own sign that read, “I’m with stupid.”

On the other side he’d written, “God doesn’t believe in signs.” It seemed the protestors had not noticed this cat amongst the pigeons, poking fun at their demonstration.

Soon, dreadlocks swinging, a shirtless man in harem pants approaches the preacher. He writes on a notepad with a black Sharpie, it reads, “Are you God?” he holds it in front of the preacher’s face.

“You are judging people,” he says coming in a little too close.

The preacher takes a swing.

The dreadlocked man begins to blow air kisses, inciting a tirade of anti-homosexual slurs from the preacher before an all-out brawl ensues.

At one point the shirtless, dreadlocked man falls at the feet of the preacher who then slams his megaphone, multiple times, down onto the man’s naked back.

About 10 LAPD officers show up. By this time the melee has migrated from the boardwalk down to Speedway and Windward. The preacher makes a move to leave but one of his team, a large man in a blue “Jesus Saves” t-shirt orders he stay. An officer clamps handcuffs on the megaphone protester, the crowd cheering over his arrest.

The air is still electric with the buzz of the fight. Bystanders mill awhile, sharing stories of what they had just witnessed. At some point the dreadlocked man had melted into the crowd and was now nowhere to be seen.

“It happens a lot at religious events like this,” said one LAPD officer. “People have their beliefs. Who’s to say who’s right and who’s wrong? Sometimes it escalates and gets heated like this. That’s when we have to come in and settle things down.”

Loaded into the patrol car the arrested protester is carted away. Excitement over, the crowd dissipates some head off down Windward, other drift back to the festival for a curry and perhaps, some good Karma.