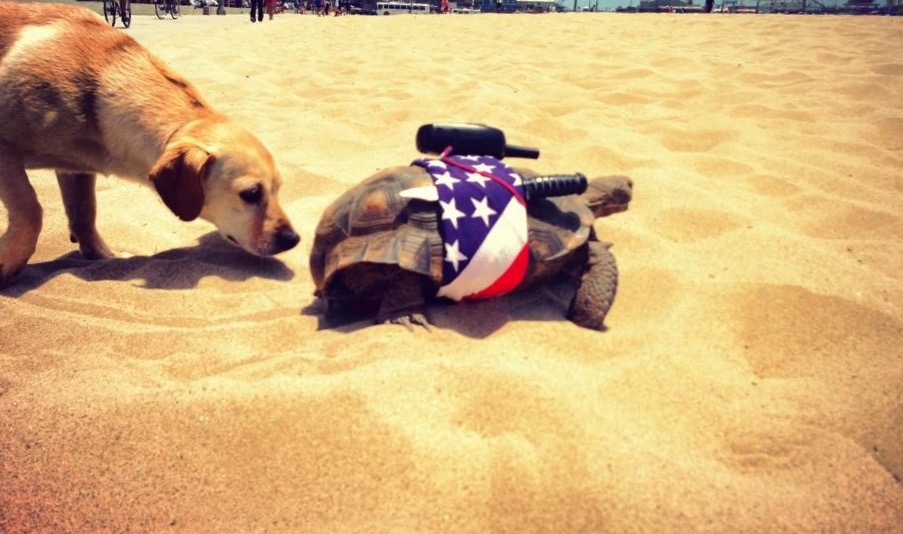 There’s one Venice resident who has welcomed this weekend’s heat, his name is Rambo the Tortoise and together with his human buddy, Mike Salenko, Rambo is on a mission to spread the word about the threat to his species.

Used to high temperatures, Rambo is a Mojave Desert Tortoise. An endangered species who’s numbers are dwindling. Due largely to urbanization,  in some areas, their numbers have decreased by up to 90%.

“As more and more houses are being built,  and roads go in, it pushes the Mojave Desert Tortoise out of it’s natural habitat. Many of them get hit by cars. The lucky ones end up going to places like Joshua Tree Tortoise Rescue” says Salenko.

Salenko says he’s always had an affinity with Joshua Tree and when he heard about the plight of the Mojave Desert Tortoise he wanted to do something about it.

His first step, adopting Rambo. As it turns out there are a large number of these tortoises that can not be returned to the wild and need adoptive homes.

In spite of a lengthy adoption process,  “I had to fill out forms, and take interviews so the people at Joshua Tree Tortoise Rescue could determine I was fit to be a tortoise parent ” says Salenko, it turns out tortoises  are surprisingly low maintenance pets.

Rambo has now lived with Salenko three years. “I have a garden where he likes to wander around digging holes.” says Salenko.

When Rambo is not digging holes in the garden, or enjoying a tasty chunk of organic cucumber, he and Salenko hit Venice Beach and spread the word about Turtle conservation.

It seems, as crazy as a place Venice is, here a tortoise can stop traffic – for all the right reasons.

“We spend a lot of time on the beach” says Salenko “I just let Rambo wander around and people naturally gravitate towards him. They ask questions and together we’re able to inform and educate people about the Mojave Desert Tortoise.”

Similar to counting the rings around a tree stump to find out, with a tortoise you count the rings on it’s shell. Rambo is thought to be around 20 years old. As a tortoise like Rambo can live between 60-80 years, Salenko says he already has a succession plan in place “I’m really just Rambo’s caretaker, I’ve lined up my nieces to take him next, they’re one and a half and three, and they just love him”

For now Rambo and Salenko continue to turn heads on Venice Beach and spread the word about the plight of the species.

Follow Rambo the Tortoise’s Venice Beach adventures here on facbook and if you’re interested in finding out more about tortoise adoption, here is the Joshua Tree Tortoise Rescue Facebook page.