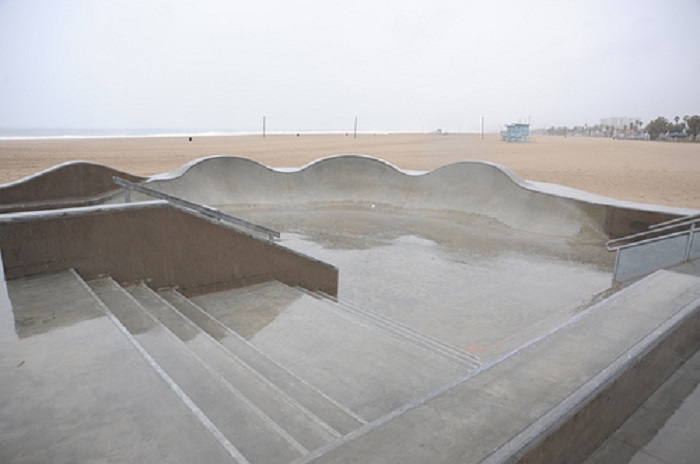 A storm out of the Pacific Northwest bore down on the Southland today, threatening heavy rainfall, flash flooding, rivers of mud and debris in areas denuded by wildfire, high surf, perilous rip currents, and winds gusting at as much as 70 miles per hour.

Los Angeles County public works crews have been working to remove debris from catch-basins in the area in hopes of preventing flooding by giving rain runoff a clear path out of the area.

“A strong storm system will move across the area Thursday and Thursday night, bringing moderate to heavy rainfall,” said a National Weather Service statement. “Behind the front, on Friday and Friday evening an unstable air mass will generate numerous showers and possible thunderstorms.”

NWS forecasters said the storm could dump 1 to 2 inches of rain on coastal and valley locations, and 2 to 4 inches in foothills and mountains. At times, the rain may come down at a rate of between a half-inch and an inch per hour, said NWS forecasters.

“Due to the potential for intense rainfall along the cold front, and with the showers and thunderstorms behind the front, there is the possibility of dangerous flash flooding and mud and debris flows in the recent burn areas of Ventura and Los Angeles counties,” the statement said.

A flood watch will also be in effect in Orange County, particularly in the Silverado Canyon burn area on Friday and Friday night.

Additionally, a high wind warning will be in effect starting tonight in parts of Los Angeles, Ventura, Santa Barbara and San Luis Obispo counties. In L.A. County, it will take effect at 7 p.m. in the San Gabriel Mountains and the Antelope Valley, and at 10 p.m. in the Santa Monica Mountains, expiring everywhere at 7 a.m. Friday.

Those areas will be swept by south winds blowing at sustained speeds of between 30 and 45 miles per hour, gusting to 60 mph in the Santa Monicas and 70 mph in the San Gabriels and the Antelope Valley, NWS forecasters said.

“Winds this strong may down trees and power lines and cause property damage,” warned an NWS statement. “Dangerous driving conditions are also expected.

The statement urged residents to “secure all loose outdoor furniture in advance of the onset of strong winds.”

Forecasters said the fast-moving storm, while shorter than last week’s rain event, could dump more of the wet stuff on the region. Snow levels, meanwhile, will initially be above the resort level, but dip to about 5,000 feet on Friday afternoon.

“There could be a brief mix of rain and snow at the summit of the Grapevine on Interstate 5. However, no accumulations are expected,” according to the Weather Service.

Snow accumulations in upper mountain elevations could reach up to 10 inches, forecasters said.

Also expected is pounding surf along the coast, with the second of two westerly swells reaching the outer waters this afternoon and spreading. A high surf advisory will take effect tonight and remain in force through Saturday.

NWS forecasters said the Central Coast will be especially vulnerable since it will experience “large and dangerous surf” from this afternoon through Saturday, a statement said.

Forecasters said the high surf is likely to cause significant beach erosion and flood piers and jetties, low-lying areas and beachside parking lots. They said waves of between 7 and 10 feet are expected, with local sets of up to 13 feet along some west-facing beaches.

“Avoid standing on jetties, piers and rocks near the edge of the water,” warned an NWS statement. “Remember to never turn your back to the ocean during large surf events.

Forecasters warned swimmers who may get caught up in strong rip currents to swim parallel to shore until they can free themselves.

By Yo Venice Staff December 11, 2014
in Westside Wellness
Related Posts