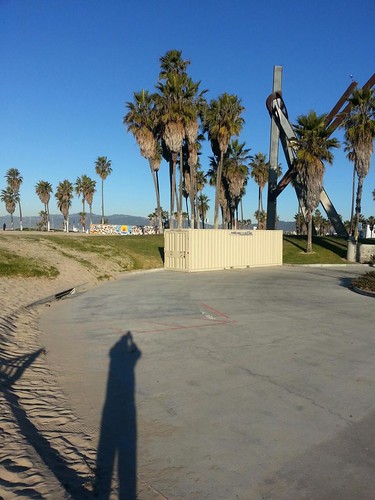 The Venice Stakeholders Association has filed a letter with City parks officials demanding that the City adhere to State laws in connection with the recent placement of a 30-foot long, 9 foot tall railroad transport container at Windward Plaza, within the Venice Beach Recreation Area and just steps from Venice Beach. The container is to be used to store the possessions of up to 80 people on a daily basis.

The letter, directed to City Recreation and Parks Commission president Barry A. Sanders and general manager Jon Kirk Mukri, notes that the container “constitutes ‘development’ within the Coastal Zone and thus requires the issuance of a Coastal Development Permit by both the City and the California Coastal Commission. In addition, the installation requires the preparation of an Environmental Impact Report (EIR) under the California Environmental Quality Act (CEQA).”

“The City must abide by the same rules that apply to private property owners,” said Mark Ryavec, VSA president. “No Boardwalk property owner could plop down a huge metal storage container within view of the beach and then start using it to store various and assorted property without the proper permits and environmental review.”

“Here, the City has put the container directly between the Boardwalk and the beach, in the middle of a City park and in open view of millions of visitors. That makes it all the more objectionable.”

The VSA letter demands that the container be removed immediately, or else the group will consider suing the City for an injunction to order its removal.

The text of the letter:

I represent the Venice Stakeholders Association, a non-profit organization committed to civic improvement in the Venice neighborhood of Los Angeles. On January 15, 2013, the Department installed, on Windward Plaza in the Venice Beach Recreation Area (VBRA), a large railroad-type storage container for the purpose of regularly storing personal articles and other possessions by homeless persons and other campers living on the Venice Boardwalk and nearby streets and sidewalks. This project constitutes “development” within the Coastal Zone and thus requires the issuance of a Coastal Development Permit by both the City and the California Coastal Commission. In addition, the installation requires the preparation of an Environmental Impact Report (EIR) under the California Environmental Quality Act (CEQA).

Summary. The installation of this large metal storage container just a few feet from the ocean is clearly “development” under the Coastal Act, and thus requires a Coastal Development Permit from both the City itself and the California Coastal Commission. In addition, there is a fair argument that this project, even with mitigation, would cause a significant adverse impact on scenic resources, due to its appearance and its use as a drop-in storage facility. Thus, an environmental impact report (EIR) should have been prepared prior to its installation. (See Public Resources Code section 21080, 21100; CEQA Guidelines section 15064.)

Project Description. The railroad-type storage container is approximately 6 feet wide, 9 feet tall and 30 feet long, and is constructed of corrugated metal. It is located on Windward Plaza adjacent to the Los Angeles Police Department substation, approximately in the center of the Venice Beach Recreation Area and only steps from the beach itself. The container is significantly taller than a person, and is within open view of the beach, the Venice Boardwalk, and the grassy areas within the VBRA. Thus, it intrudes upon, and from some perspectives completely blocks, views to and from the beach. The container was installed with the express purpose of providing temporary storage for the possessions of homeless people and other campers, and reportedly will be staffed by volunteers who will check possessions in and out of the facility. City officials estimate that the storage unit will hold possessions for more than 80 persons at a time.

Use of Facility by Campers at Venice Beach. Advocates for the facility claim that it will support the Westside Winter Shelter program, which provides overnight lodging at an Army National Guard Armory in Westwood, about 7 miles away from the site, by allowing users of the program to store large amounts of belongings that would not be allowed at the Armory. However, the storage facility is not restricted only to users of the Westside Winter Shelter Program. To the contrary, it can be used by any person camping at Venice Beach. In fact, there is every reason to assume that it will be used by persons who have no intention of seeking shelter at the Armory or anywhere else. Other cities with successful homeless serving programs, such as Santa Monica, have experience with such stand-alone “locker” facilities, and have avoided them because they simply enable campers to stay on the street and in public parks.

Requirement of Coastal Development Permit. A Coastal Development Permit must be obtained for any “development” within the Coastal Zone, which includes Venice Beach. Public Resources Code section 30106 broadly defines “development” as including, among other things, “on land, in or under water, the placement or erection of any solid material or structure.” Courts have held that all manner of structures, no matter how small or unobtrusive, constitute “development” for purposes of the Coastal Act. See Gualala Festivals Committee v. California Coastal Com’n (2010) 183 Cal.App.4th 60, 67 (citing to LT–WR, L.L.C. v. California Coastal Comm’n. (2007) 152 Cal.App.4th 770, 776 (installation of gates with “no trespassing” signs is development); Georgia–Pacific Corp. v. California Coastal Comm’n. (1982) 132 Cal.App.3d 678 (security fence met definition of “development” in Public Resources Code section 30106 because it “involve[d] the ‘erection’ of a ‘structure’ on ‘land,’ or the ‘construction’ of a ‘structure,’ or both.”).

Significant Scenic Impacts. The storage locker has a significant impact on scenic resources. It is made of corrugated metal and just steps from Venice Beach, in the midst of a City park which presently contains very few structures. It intrudes upon, and from some perspectives completely blocks, views of the ocean now enjoyed by millions of visitors and residents.

No Categorical Exemption From CEQA. The City of Los Angeles and the California Coastal Commission are obligated to comply with CEQA before implementing this project. Although it may be tempting to propose the application of a “categorical exemption” under CEQA due to the placement of the storage locker in an existing City park and beach, no such exemption applies here. Even if one of the categorical exemptions might be interpreted creatively to allow for a project of this type, the appearance and intrusiveness of this railroad- style storage locker, and its proximity to a crowded residential area and tourist destination, are “unusual circumstances” precluding the application of any such exemption. (See CEQA Guidelines section 15300.2(c); Lewis v. Seventeenth District Agricultural Association (3rd Dist. 1985) 165 Cal.App.3d 823.)

Lack of Mitigation. There has been no attempt to mitigate the significant visual and other impacts of this metal storage locker in the middle of the VBRA. The facility is in open view of the millions of people who visit Venice Beach each year. Nor is any such mitigation possible. Any attempt to conceal the structure would require the installation of another structure or improvement that would also block views to and from the beach.

No Mitigated Negative Declaration Under CEQA. A mitigated negative declaration under CEQA is precluded because potentially significant scenic impacts of the project either would not be, or could not be, mitigated below a level of significance. Thus, an Environmental Impact Report must be prepared in order to satisfy CEQA.

For all of the foregoing reasons, a Coastal Development Permit must be obtained and an Environmental Impact Report must be prepared for the installation of the storage locker.
Accordingly, we request that the Department immediately remove this storage locker and, if it wishes to pursue the installation of such a facility in the future, comply fully with both the Coastal Act and the California Environmental Quality Act.

In the event that you fail to remove this structure, VSA will consider filing a petition in the Los Angeles Superior Court for an injunction mandating its immediate removal.

About the The Venice Stakeholders Association: