Happy St. Patrick’s Day Venice! With all this rain, you can pretend you really are in Ireland today! Head on over to The Sidewalk Cafe, where they will be serving corned beef and cabbage with mashed potatoes and gravy all day long! They have plenty of drink specials too! 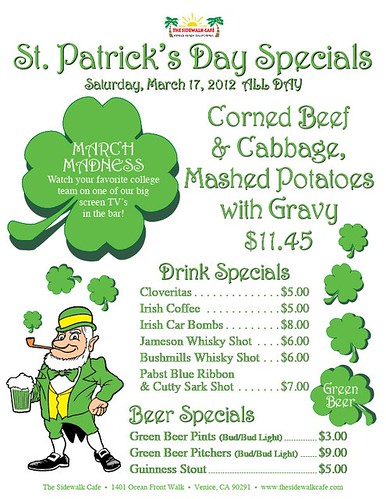 Remember not to drink and drive!, There will be a Sobriety Checkpoint in the Pacific Division from 8pm to 2am! Getting a DUI is super expensive, just ask this 18 year old that got 3 of them in 17 days! No amount of fun is worth jail time!

The Tradition of St. Patrick:
Around 432, Bishop St Patrick went to Ireland to “save” the Irish, focusing on converting royalty and aristocracy as well as the poor to Catholicism. Irish folklore tells that one of his teaching methods included using the shamrock to explain the Holy Trinity (the Father, the Son, and the Holy Spirit) to the Irish people. After nearly thirty years of teaching and spreading God’s Word he died on 17 March, 461 AD, and was buried at Downpatrick, so tradition says.