L&M Arts Venice is featuring the works of Ahmed Alsoudani from now until March 3rd, 2012. The exhibit is the Los Angeles debut of the Iraqi born, New York based artist and includes new paintings as well as both large and small scale drawings. 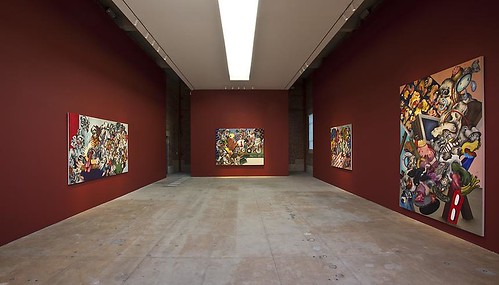 At first glance, Alsoudani’s densely layered, carnivalesque tableaux seem playful with their bright colors, curious objects, and ornate patterns. However, soon one begins to notice the ghostly anguish of the faces, disembodied fleshy bits cascading across the canvas. Beseeching eyes peer out from unexpected places and highways of arteries and tubes course throughout the picture planes.

Alsoudani was born in Baghdad. While he left his country 15 years ago, his work references the horrors of that war-torn landscape, becoming the echoes, fractured memories and impressions of what he, and those he left behind, have experienced. But the work is also more than that, and conveys a much larger sense of social unrest that can be applied globally.

The work also makes many direct and indirect references to art history. His arsenal is deep and wide, inherited from traditions as far-reaching as Renaissance painting, Surrealism, non-Western art, early German Expressionism, and beyond.

Drawing is also a large component of Alsoudani’s work, reflected here in the broad display of works on paper. The artist’s practice is rooted in the act of drawing, and even his canvases dance between pastel, charcoal, and acrylic. The figures often remain drawn rather than painted, achieving an ethereal, haunting quality that lays in stark contrast to the brightly saturated colors that are often found throughout the pictures. This visual tension serves to make the work more honest, providing moments of both comedy and tragedy, in this way mimicking life.

Ahmed Alsoudani lives and works in New York. In 2008, he received his MFA from the Yale School of Art in New Haven, CT. He also studied at the Skowhegan School of Painting and Sculpture, and in 2004 received his BFA from the Maine College of Art in Portland. He has had solo exhibitions at Haunch of Venison, London, England in 2011; Robert Goff Gallery, New York in 2009; a solo booth at Art Dubai, 2009; MEHR Gallery, New York in 2008; and at Thierry Goldberg, New York in 2007. He has participated in group exhibitions including “Boundaries Obscured, ” Haunch of Venison, New York in 2011; the 54th Venice Biennale in 2011; “La Route de la Soie,” The Saatchi Collection, Tri Postal, Lille, France in 2010; “Unveiled: New Art from the Middle East,” Saatchi Gallery, London, England in 2009; “Tonight Forget About Your Houses and Cars,” Union Gallery, London, England in 2008; and “Defining a Moment: 25 New York Artists,” House of Campari, New York also in 2008.