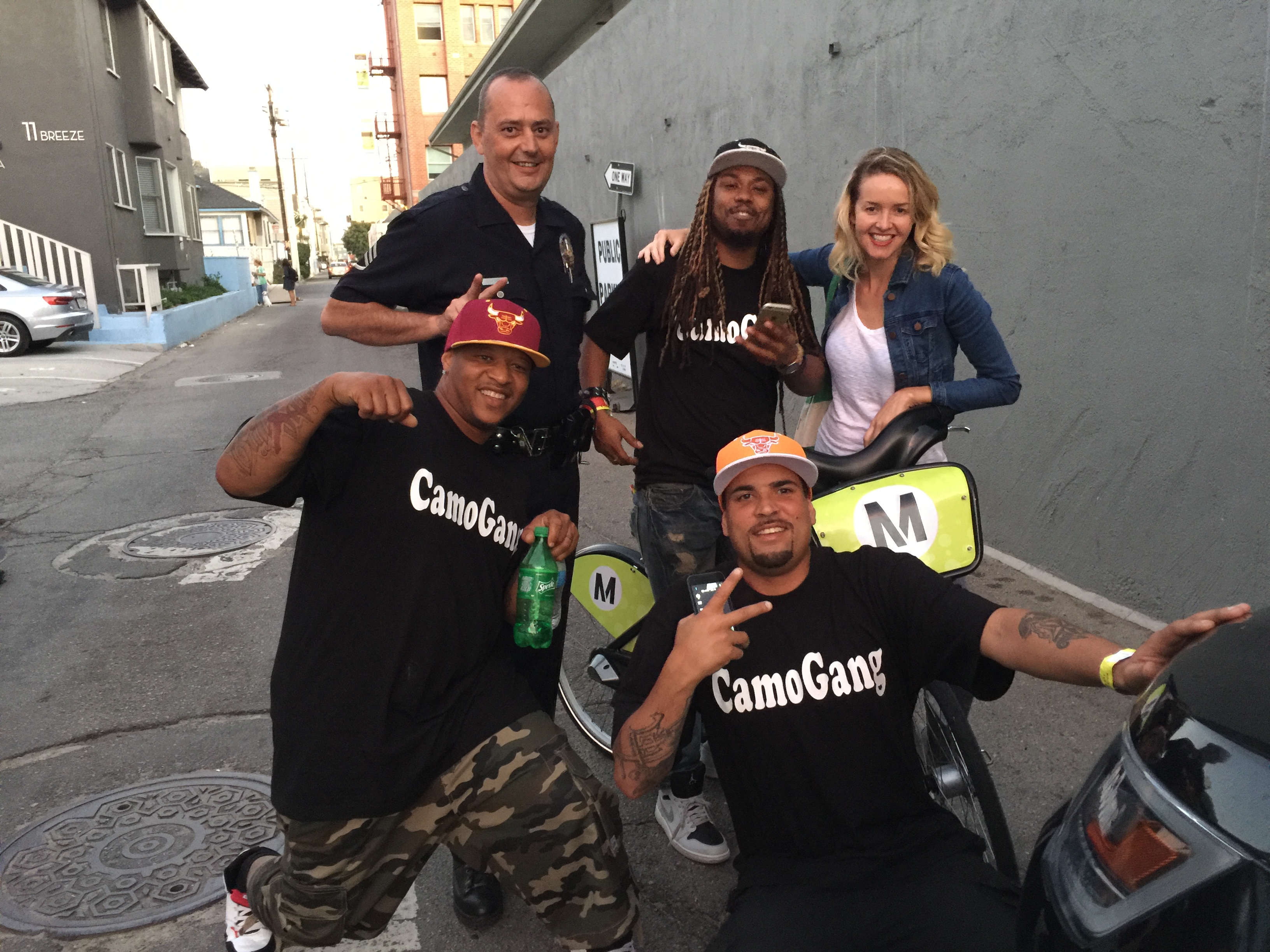 Locals know there is no use driving on a busy weekend in Venice. Walk, skate, or try one of the new Metro Bikes if you want to get from one side of the neighborhood to the other.

On Abbot Kinney Festival Sunday, I needed to get from Washington Boulevard to the Brooks Avenue end of Speedway to meet with Sergeant Scotty Stevens from Los Angeles Police Department (LAPD) Pacific Division. So, I signed up for a free first month of Metro Bikes online and headed to the bicycle station near Scopa Italian Roots.

I’ve got to be honest; the bright, “I’m a lime from the ‘80s,” Metro Bike green is not a shade you’d paint your Linus. However, the big M logo on the front is for sure what I’d pick if I were a superhero.

Riding down the quiet end of Abbot Kinney Boulevard, then skipping the crowds, and cruising down Electric Avenue, I wove my way to the end of Brooks.

Standing to chat with Stevens, I listened as he told me that the day had been pretty quiet. Except for a dude snapping shots up the skirts of ladies with his smartphone at the Abbot Kinney Festival, all had been “peaceful,” Stevens said.

Jonathan wanted a bicycle, so he could get to his parked car and see if he’d left his gold chain there. He argued it would be quicker to ride than walk. It was an opportunity to put my superhero powers to work!

However, in Venice, it never makes sense to loan your bike to a stranger.

“Take my wallet,” said Jonathan as he wrestled the handles from my not-very-superhero grip. I turned to Stevens. He told me to give back the wallet.

By now Jonathan’s brothers Cameron and Ch’e had arrived on the scene, “dude, you can’t take the woman’s bike,” they said as Jonathan struggled to throw his leg over the seat. “Tell her to give me the bike. I’ll be 8 minutes,” Jonathan said to Stevens.

“I’m not going to tell her to do anything. But…” Stevens said, “If you give her your driver’s license she can lend you her bike, and if you don’t bring it back I know where you live,” he said as he helped Jonathan adjust the seat height.

So, thanks to LAPD Sergeant Scotty Stevens, a stranger in Venice Beach jumped on my bike and took off down Speedway.

Jonathan was not eight minutes.

Metro sent a text that read, “Hope you’re enjoying your Metro Bike ride. Just letting you know that your trip is still open.” A thoughtful reminder just in case I’d forgotten that a police sergeant had lent my bike to a complete stranger.

I reasoned that if Jonathan returned with his chain all would not be in vain and I could tell the story of my Metro biking superhero ability to help find lost gold chains. If Jonathan didn’t come back, according to Metro’s user agreement, bikes not returned within 18 hours are considered lost or stolen, I’d have to pay $1,000.00, and Metro would file a police report. Well, that’d be funny!

Jonathan was close to an hour and sadly, still without his chain when he returned. He handed back the bike. Stevens said I told you so, we all posed for a picture, and lived happily ever after. The End. Or should I write “To be continued…” because they do that at the end of superhero stories and there is still a guy on the loose in Venice who likes taking pictures up ladies skirts, he may even be wearing Jonathan’s chain.