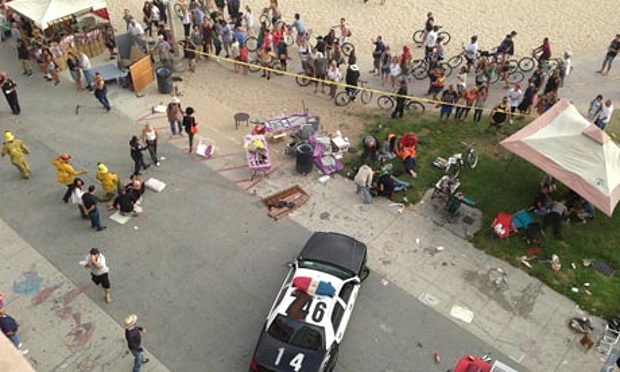 A state appeals court panel, on Thursday, June 8, upheld a Colorado man’s conviction on murder and other charges for driving his car along the crowded Venice Boardwalk, killing an Italian woman on her honeymoon and hitting 17 others nearly four years ago.

Nathan Louis Campbell was found guilty in June 2015 of second-degree murder for the August 3, 2013, death of 32-year-old Alice Gruppioni, along with 17 counts of assault with a deadly weapon and 10 counts of leaving the scene of an accident.

In a 12-page ruling, the three-justice panel from California’s 2nd District Court of Appeal rejected the defense’s contention that the evidence supported only one count of leaving the scene of an accident.

The appellate court justices found that the jury’s findings “are supported by evidence that Campbell caused 10 collisions while driving, turning and aiming at separate groups of people on the boardwalk and that after each collision, he had the opportunity to stop and render aid, but he instead committed a new volitional act and deliberately struck another person or group.”

The appellate court panel also concluded that a prosecutor’s reference to Campbell’s silence after being approached by homicide detectives after initially speaking to three other police officers was a “fair response” to Campbell’s testimony that he cooperated fully with police and answered their questions after the crash.

Campbell, who is serving a 42-years-to-life term in state prison, said at his September 2015 sentencing that he was “responsible for a terrible incident that has caused lasting physical pain and mental anguish.”

This was not an intentional act. This was a horrible accident that I am responsible for causing because of a combined set of circumstances, the way that I reacted to them, my own bad judgment, confusion, panic, and fear,” Campbell said, reading from a prepared 2 1/2-page handwritten statement.

“This incident has been a lasting nightmare for everyone involved…a nightmare that I am responsible for causing… Every minute of every day I wish that the horrible things that happened on August 3rd, 2013, had not…There are no words that could ever accurately express how truly sorry I am for what happened that day,” Campbell said, adding that he hoped that Gruppioni’s husband, family, and friends will find “some small measure of peace in their lives.”

Campbell also said he wished that “I had not used such bad judgment as to drive when I was so tired and exhausted that I could barely stay awake. I wish that I had not been so careless and paid attention as to when I shifted. I wish that I had hit the poles at the end of Dudley instead of trying to give myself a few more feet to stop so that I would not damage my car. More than anything, I wish that I could have stopped instead of panicking, causing pain to so many people or just parked somewhere else so that this event had never happened.”

But Los Angeles Superior Court Judge Kathryn A. Solorzano took issue with Campbell’s characterization of his actions as an “accident.”

“This whole scenario from my perspective is not an accident,” Solorzano said. “…Everything you did on that date is criminal behavior. Crimes took place on the boardwalk.” The judge noted that some of the victims had extreme injuries, some
partially disabled, and some emotionally disabled. “All you had to do was stop because there was nothing wrong with the brakes,” she told Campbell. “…It was entirely avoidable.”

During Campbell’s trial, Deputy District Attorney Victor Avila told jurors the defendant had “full knowledge” of how crowded Venice’s Ocean Front Walk was because surveillance footage showed him walking earlier on the popular tourist destination and that Campbell had threatened to run over a drug dealer whom he believed had taken a friend’s money and never returned with drugs.

Campbell’s attorney, James P. Cooper III, conceded during the trial that his client was driving the 2008 blue Dodge Avenger that barreled down the boardwalk, but said Campbell was actually doing everything he could to avoid striking pedestrians.

During Campbell’s sentencing hearing, the prosecutor played a roughly 16-minute video featuring Gruppioni’s aunt, Katia, and showing scenes of the victim’s family. Alice Gruppioni had been married for about two weeks.

The judge also heard statements read on behalf of a French couple who were on the boardwalk that day. “We ran to save our lives … but unfortunately, I was hit,” Joanna Botton said in the statement. “…I don’t even know how I managed to survive the hit.” Botton said she suffered physical and psychological injuries, and still has nightmares about Campbell behind the wheel of the car.

Several others who were injured on the boardwalk said at a hearing shortly before Campbell’s sentencing that they did not understand the reason behind his actions. “I will forever feel that this person was on a mission to maim and kill,” Judith Fox said. Fox said she will “always ask, ‘Why?’ Why would somebody rob so many people of so much?” she said.

Nancy Martinez, who walked into court with a cane, said her “life changed completely on that date of the accident because of this guy…It’s been two years now, but I’m still in pain with the trauma and fear of going out,” she said then.