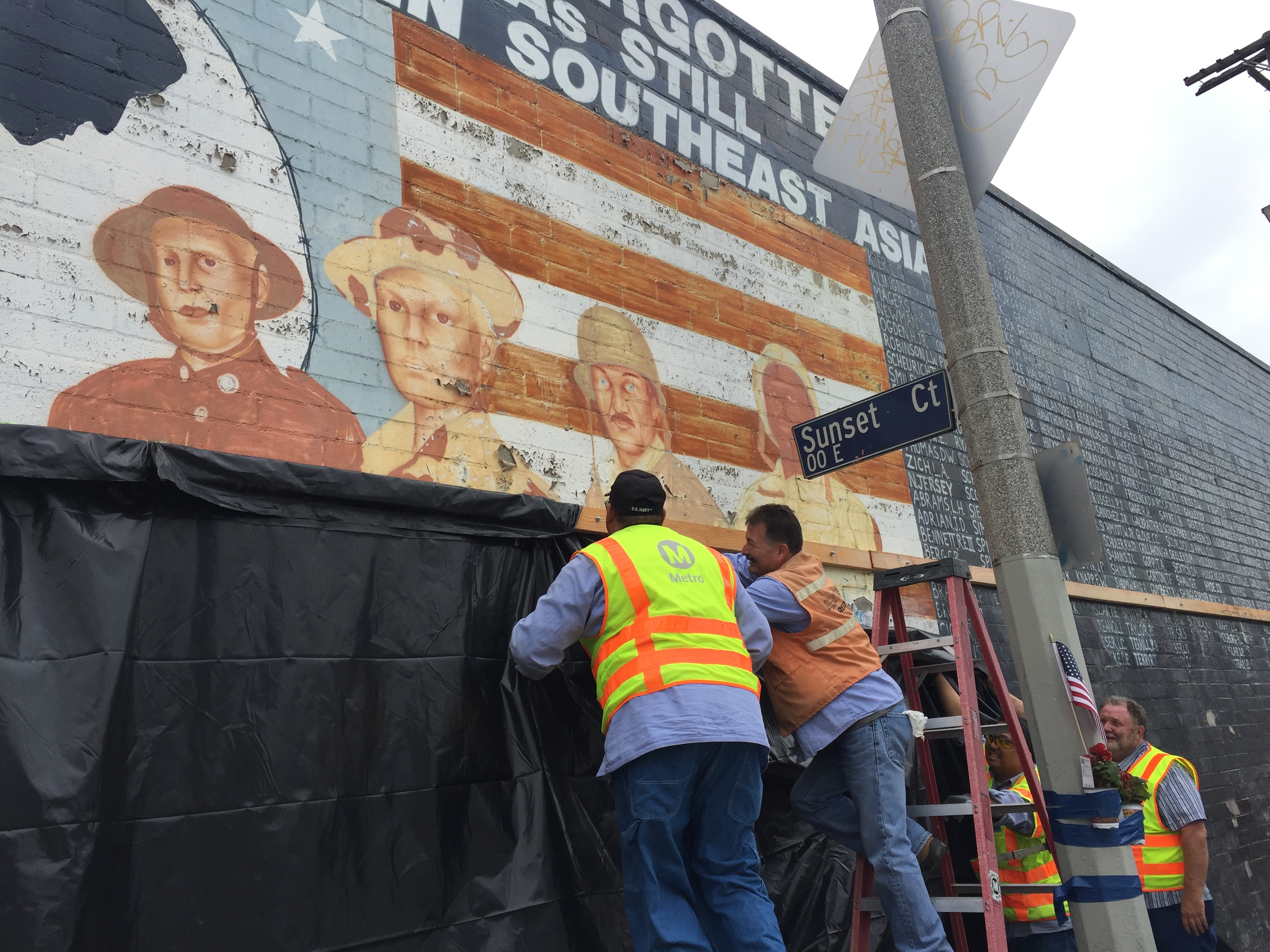 Today experts from Venice based organization SPARC will examine the full extent of damage caused by illegal graffiti to a memorial mural in Venice. The giant mural, painted in the early 1990s, is on Pacific Avenue, just a few blocks from Venice Beach, on a the wall of a former bus yard owned by the Los Angeles County Metropolitan Transportation Authority.

Councilmember Bonin says it is a “disgraceful desecration of an historic Venice mural dedicated to 2,273 POWs and troops declared Missing in Action during the Vietnam War.”

However, not all the damage has been caused by taggers. In a rush to scrub away the unwanted graffiti well meaning volunteers may have caused the mural more harm than good by using products that not only stripped graffiti but hundreds of names that lay underneath.

The mural, which is several decades old, had no protective anti-graffiti coating, and SPARC experts had warned that removal of the vandals’ paint could destroy the mural itself.

Jon Scudder who stepped up as a mural clean-up spokesperson told news outlets and Venice locals he owned a construction business. Driving a truck with 1CONSRUCT license plates and handing out a card for his company Detail Press Construction Services.  However Yo! Venice was unable to find the company online. Instead Scudder’s personal website, JonScudder.com, leads to a page for his television production company.

At the mural site division amongst the ranks rumbled in.  A handful of people who felt the graffiti should not be cleaned until after an expert check began to butt heads with Scudder.  Who Yo! Venice overheard complaining, as some locals began questioning his credentials, that he would “clean this up without Venice.”

At first glance on Saturday Venice-based mural expert, UCLA Professor, and Founder & Artistic Director of SPARC said the products used to clean the mural would make it harder for her team to restore it.

One anonymous painter had re-painted the words YOU ARE NOT FORGOTTEN. They said they didn’t think cleaning the graffiti was a good idea but they had wanted to do something with the words, “I wasn’t going to let it sit like that on Memorial Day. No way.”

“As we celebrate Memorial Day, Los Angeles and the nation are
horrified at this despicable act of desecration, a horrible insult to
those who paid the sacrifice for their nation.  We are taking every
step possible to identify and arrest those responsible, and to restore
this historic mural that pays tribute to our POWs and MIAs,” said Councilmember Bonin.

Now with half of the mural wiped away, the city is asking locals to dig up any original pictures they may have to help with the restoration.

“Peter Stewart, the artist who painted the mural in the early 1990s,
is deceased. To properly restore the mural, we will need the public’s
assistance.  Anyone with photos of the mural  (especially photos of
the lower portion of the mural, including the names of the POWs and MIAs from that section of the mural) are asked to send them to my Venice-area field deputy Taylor Bazley at:Taylor.bazley@lacity.org” says Councilmember Bonin.

The Sheriff’s Department is leading the investigation to find those responsible for the graffiti. Anyone with information about the incident or those responsible should call 888 950 7233, or Councilmember Bonin’s office at 310-575-8461.

“The City of LosAngeles offers a standing reward of $2,000 for information leading to the arrest and conviction of people responsible for illegal graffiti, and when the City Council meets next on Tuesday, I plan to introduce a motion increasing that reward to $10,000 for this incident.  I anticipate the Los Angeles County Board of Supervisors will do the same,” says Bonin.

“I sincerely thank the members of the community who have called
attention to this disgraceful act, and for all those who have voiced
their outrage, sending a powerful reminder to our veterans that their service and sacrifice are respected and cherished by the people of Venice, of Los Angeles, of California, and of the United States.”