July 16, 1950: Following an eight-year closure, Venice Beach is reopened with an all-day celebration. One of America’s finest beaches was officially opened yesterday. Los Angeles Beach at Venice, a broad, six-mile stretch of clean soft sand was opened for public use in a 13-hour program in which numerous public officials participated.

Adjoining it and also available to the public without charge are a 1,000-car parking lot and a three-acre athletic center and children’s playground.

The beach had been closed to the public for the last eight years due to State Health Department quarantine.

While the Hyperion sewage-disposal plant was being built, the city transformed the small narrow beach to its present size by adding 350 acres of what was once the Pacific Ocean. Fourteen million cubic yards of sand was added to the area.

This photo accompanied the above article in the July 17, 1950, Los Angeles Times.

By Sam Catanzaro Over the weekend, before the rain fell, a solid combination of swells sent fun waves to Venice...

By Sam Catanzaro  Summer is long over and the school year is well underway but for surfers in Southern California,... 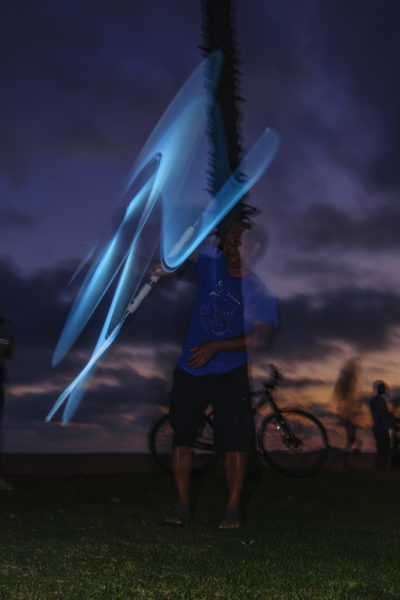 Light Up the Night

By Sam Catanzaro On Wednesday nights, local artists and creatives come together for GLOW FLOW, the all-night event where all...