Jason W., Robert W. and Gloria H. report that the huge sound that woke Venice up was a lighting strike that hit a home in the 1400 block of Moore near Palms. 10+ emergency vehicles were on the scene within minutes. 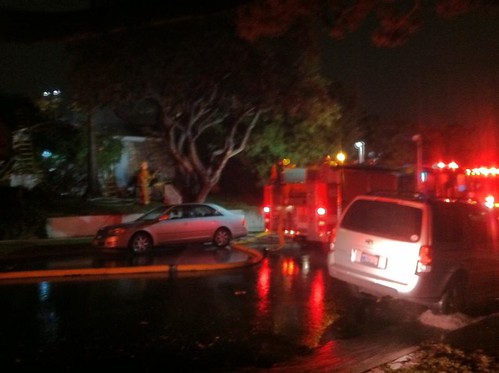 Says Jason: “They immediately evacuated. Shocking how much smoke and fire there was just following the strike. Can still hear the fireman’s chainsaws. I thought it was a nuclear bomb!”

It is believed that the residents of the house are OK!

Update: Brian Humphrey of the LAFD confirms that there were no major injuries. 32 firefighters took 15 minutes to put the blaze out. The fire was confined to the attic of the one story home. Humphrey added “lightning is presently surmised, the Chief has yet to declare a definitive cause”.