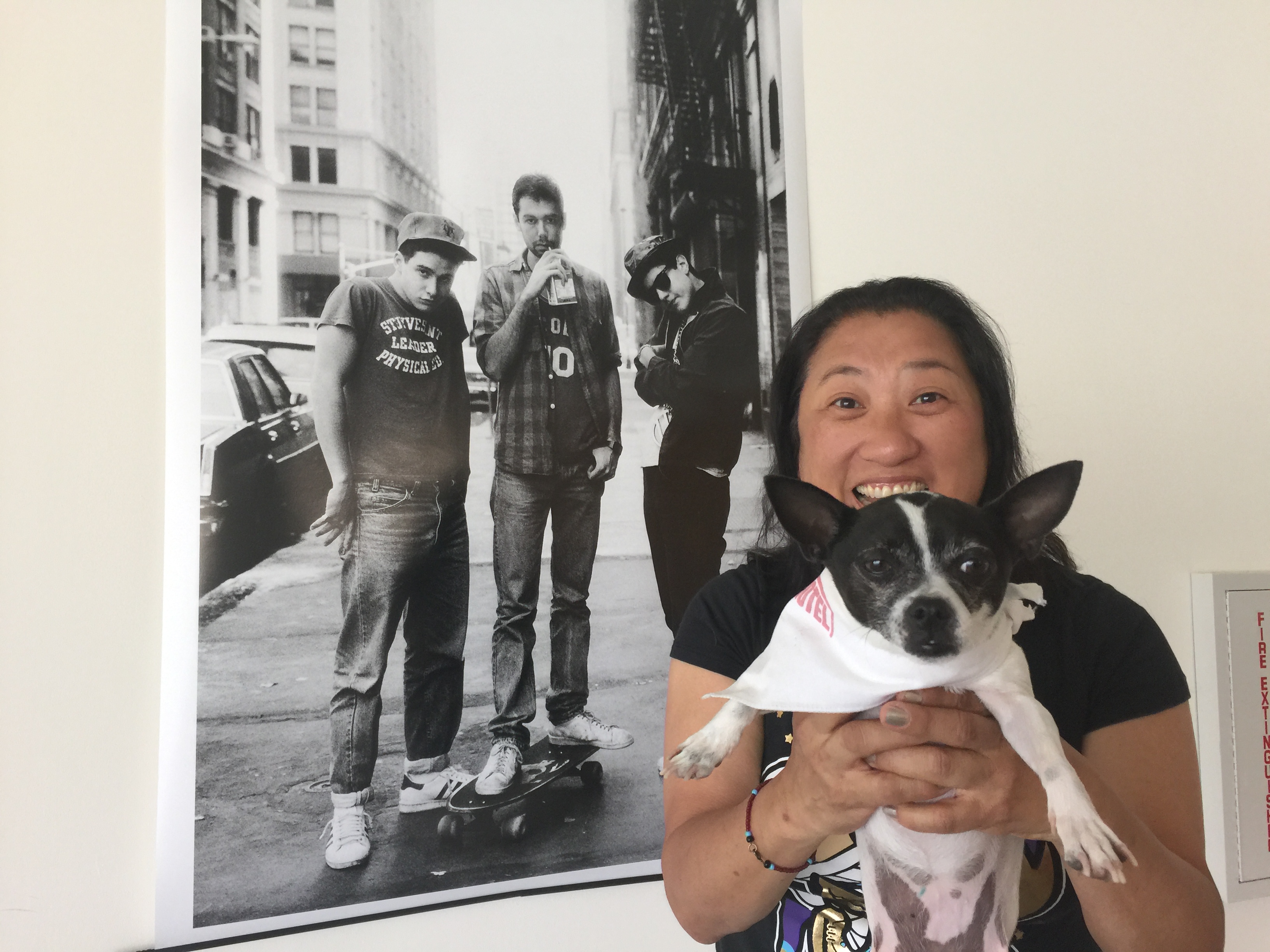 Venice Art Crawl President Sunny Bak with Pinky Bak. Behind is a vintage Bak photo of the Beastie Boys in New York City.

This year’s Venice Art Crawl Fundraiser is set to be one of the best Venice parties of 2017. Special guests include OG members of NWA, there will be a vintage rock and roll photography exhibition, and a VIP sit-down dinner at Hal’s in Playa Vista. The Music Connects Us: Photography & Art Show VAC Fundraiser event on April 20th is a great excuse to support Venice’s volunteer run, non-profit arts organization.

Music and photography have long been a passion of Venice Art Crawl President Sunny Bak. It all began in New York City. Bak was obsessed with the theater and would ride the 7 train, “the Flushing line to the end” to Times Square, where she would catch matinee shows on Broadway before spending her evenings as a teenage paparazzi. She was so young, one time, Elizabeth Taylor asked her if she was out past her bedtime.

Bak, began her photography adventures in the early 70’s in New York City when she was just a teenager. “I had been shooting as a kid paparazzi from the age of 13-17 on Broadway,” she said. A regular with her camera, she soon befriended many of the cast from the Broadway shows.

“I used to play hooky and tell my mother I was at the library or my friend’s house but I was really at Times Square seeing Broadway shows and skipping school on Wednesday afternoon to see matinees,” Bak told Yo! Venice.

Bak saw the greats. Two Gentlemen of Verona, A Chorus Line, Pippin, Candide, Chicago. “Gail Boggs was in Leonard Bernstein’s Candide on Broadway then, and now, she is performing for the VAC at the Hal’s dinner event on April 20,” said Bak.

Times Square was rough for most back in the day, especially so for a 13-year old. Broadway actress Crissy Wilzak, who was in the original Seesaw, gave the young photographer some vital survival tips.“When you get out of the subway look straight ahead. Walk like you know where you’re going. Don’t look around like a tourist,” Bak remembers Wilzak saying.

American born Bak is of Chinese Indonesian heritage. Standing at only 5”1, even today she looks young for her age. However, as a tween running with a pack of New York City paparazzi, she said she never felt out of place, even if her age did catch the attention of some major celebrities.

“I remember one week Elizabeth Taylor was in town. We were all following her around. She would get back to her hotel at two a.m. each night. One night she looked at me and said ‘Aren’t you a little young to be out so late?’ I said to her, ‘well if you didn’t stay out so late I wouldn’t have to be up so late,’” said Bak adding that the next night, Taylor was back at her hotel before midnight.

Life as a child paparazzi soon morphed into a young adulthood running her own studio. Her main clients were models. However, she did work with the odd musician or two and even took the picture on the gatefold of the Beastie Boys License to Ill album.

Beastie Bak new the Beastie Boys long before the album shoot. Michael “Mike D” Diamond, Adam “MCA” Yauch, and Adam “Ad-Rock” Horovitz were regulars at Bak’s studio, “I used to wonder why they were hanging out so much then I worked it out…the models,” said Bak.

While waiting for a model to arrive Bak would put the Beasties to work, as stand-ins while she set the lights for a shoot. She has many prints of Diamond, Yauch, and Horovitz hamming on set. “The guys were stand-ins for me here,” she said pointing to one such photo.

In another picture, Horovitz stands, face half in shadow. “He was helping me test the light here too.” Bak’s personal collection of prints reveal an intimate side of the superstars; eating lunch on a skateboard, late-night shenanigans in a bodega, and the day they found the shoot location for the License to Ill gatefold.

Some of Bak’s Beastie shots will be part of the collection on display at the VAC Fundraiser. Works by one of the early innovators of rock-and-roll photography, Guy Webster, will also be featured. As will pieces by Los Angeles street artist Homoriot, whose art is a global movement that promotes equality, gay pride, and “homo love.” The list is long, with the event transforming 3,800 square foot of space into an urban art installation. Plus there will be music. Original NWA member Arabian Prince will perform, as well as Decora, and Betty Nguyen.

VIP tickets for this year’s event include a sit-down dinner at the new Hal’s Bar & Grill Playa Vista. General admission tickets are also available. You can purchase tickets online at veniceartcrawl.com. $200 gets you a ticket to the VIP Dinner and the Art Show, and $40 gets you into the Art Show.