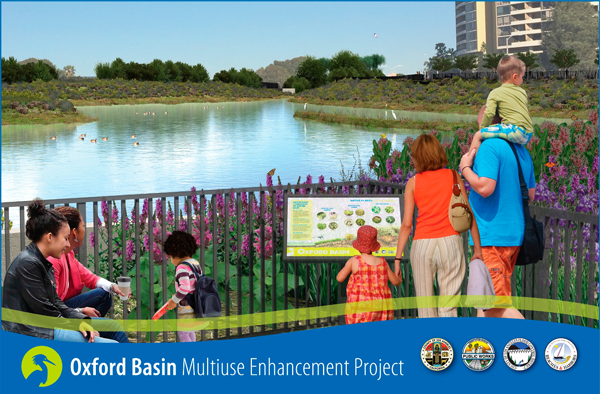 After six years of planning and a year of construction, Los Angeles County officials cut the ribbon today on a renovated flood-control basin that had become a foul-smelling eyesore but has been rebuilt into a park-like area with wildlife-viewing platforms.

Originally constructed in 1959 on the outskirts of Marina del Rey as a flood-control facility at the corner of Washington Boulevard and Oxford Avenue, the Oxford Retention Basin was once known as the “Duck Pond” due to the number of waterfowl that were kept on the site. But the site deteriorated over the years, becoming a magnet for abandoned animals such as cats, dogs, rabbits, and even chickens.

Most of the animals were cleared from the site more than 20 years ago,
but the basin stood stagnant, and in recent years was marked by a sediment-
fueled stench easily detectable by bike riders on the otherwise pristine Marina
del Rey bike path, pedestrians on Admiralty Way and some residents of the
adjacent Marina City Club condominium complex.

After about six years of community meetings and planning, the county Department of Public Works embarked on a $14.5 million renovation project last summer in hopes of improving the basin’s flood-control function and re-invigorating the wildlife habitat and water quality.

At the onset of construction, some residents and environmental activists protested the removal of hundreds of trees from the area. County officials insisted the trees were non-native species and were removed at the recommendation of project biologists, with the removal timed to avoid bird-nesting season. The renovated basin includes 730 newly planted native trees and 45,000 native plants, according to the county.

Today’s ribbon-cutting event included a tree-planting ceremony. The renovated basin includes six wildlife-observation decks, four on Admiralty Way and two on Washington Boulevard. The decks will include display panels providing information on the wildlife and vegetation.