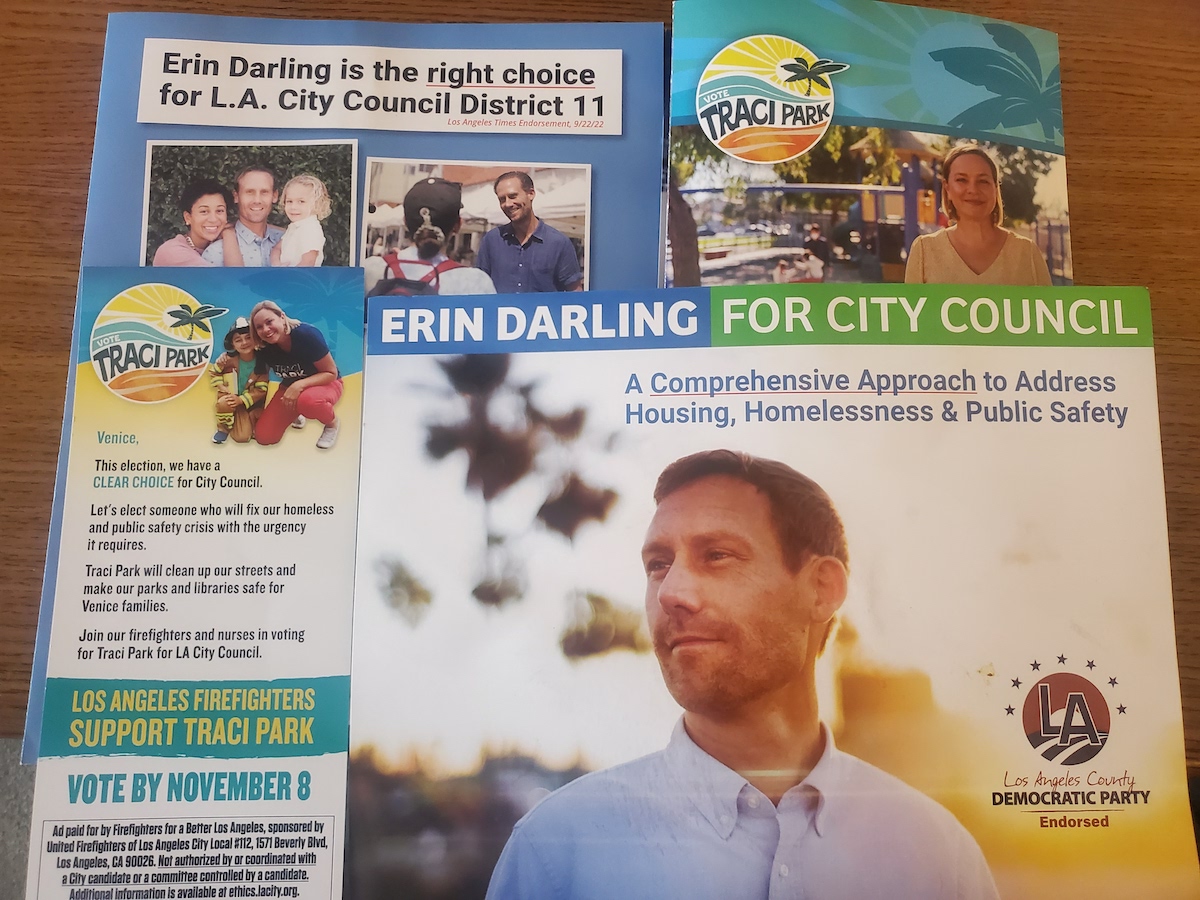 While campaigns have a habit of straying from the core issues voters really want to talk about, here in CD-11 a series of new mailings on behalf of both candidates suggest each camp is moving quietly to the center, where most LA voters see themselves from a political perspective.

As voters start to make decisions on whom to select, solution-based answers seem to be what they expect from the candidates, especially on the question of street encampments and homelessness.

The June Primary saw voters select Erin Darling, the first-time candidate for office and progressive Democrat who finished in the lead, and Traci Park, also an attorney who lives in Venice as well, the right-of-center populist who has aligned herself with the law enforcement community as well as the apartment owner lobby. Park is also seeking office for the first time.

The campaign is evident here in Venice as Park has amassed obvious homeowner and business support by the beach with numerous placards and signs endorsing her candidacy while Darling has concentrated his efforts on an intensive door to door campaign with the help of numerous Democratic Clubs and support from labor with volunteer boots on the ground.

This past weekend Park was joined on the campaign trail by LA Controller Ron Galperin in her own quest for support as ballots are being mailed as of this writing to the community.

Park strongly supports the enforcement of 41.18 to clear homeless encampments from public spaces, including areas 500 feet of school and day care centers. Park claims she is the only candidate with a plan to combat homelessness and urges voters to visit her website at www.tracipark.com

Darling originally opposed 41.18 in an interview in May, but now states he would not oppose enforcement by LAPD. A father and husband of a three-year old son, Darling wants to improve emergency response to crime, fire protection and mental health services. His 5-Point plan which was unveiled in his direct mail campaign wants to “deploy trained mental health workers for those experiencing mental health crises, freeing up police and firefighters for 911 emergencies.”

Park believes the homeless crisis in Los Angeles “is worse than ever,” and is stressing her support from first responders to make the case she is best qualified to address rampant homelessness and rising crime in this highly competitive race to succeed the retiring Mike Bonin. Campaign activity from both campaigns suggest over $3 million dollars has been raised collectively from direct contributions, city matching funds and independent expenditures according to the LA Ethics Commission.

The Darling effort is also stressing the support he has received from the Los Angeles Times, the Sierra Club and the Los Angeles Democratic Party as third-party testimonials to his agenda and campaign.

And while both candidates now concede permanent housing is still years away, both Park and Darling have indicated support for more temporary solutions that will rapidly remove individuals from the streets of Venice and Los Angeles. Neither candidate has suggested the current Venice Bridge Housing facility be closed or relocated and Park has strongly opposed the Median Project at the Venice Canals while Darling has been a an equally supportive proponent.

Park did visit the Centennial Park location before it was cleared and swept, the parcel just east of the Venice Public Library that has since been fenced after community outrage saw action by city officials to end the outdoor camping as well as stationary vehicles that populated South Venice Boulevard. While the exterior of the Library is now cleared, there are some remnants of parked vehicles that remain.

Both candidates have addressed the Homeless Committee of the Venice Neighborhood Council and made thoughtful commentary on how best to subside this crisis that still remains on the streets today in places like Flower and Lincoln Boulevard.

Ironically, both Darling and Park have moved somewhat to the middle, while the moderates that ran in the June Primary finished out of the money, but have begun to choose sides in the November General Election with Park now securing all of the endorsements made to date.

Park has picked up the support of former VNC President Mike Newhouse, an attorney and former city zoning official. Newhouse lives several doors down from Park and is a longtime community activist, coach and volunteer. Current VNC President James Murez has also endorsed Park along with Mat Smith, a US combat veteran and small business owner who was the only Republican in the original eight-person field of candidates.

Garcetti mayoral aide Greg Good, a former Venice resident who enjoyed strong labor support finished third and has made no official endorsement since the June Primary and neither has Allison Holdorff-Polhill, who finished fourth, who is a legislative advisor to LAUSD school board member Nick Melvoin. Observers believe much of the support of Good will transfer to Darling while it is unclear where Polhill’s support will land in the waning days of the campaign.

The last place finishing Soni Lloyd, a teacher and educator has remained neutral to date.

Darling has endorsed Karen Bass for mayor while Park has not indicated a preference to date. She was a strong supporter of LA City Councilmember Joe Buscaino who dropped out to support billionaire developer Rick Caruso. Buscaino announced his campaign for mayor in Venice last summer at the height of the homeless crisis at the beach.

Nick Antonicello is a longtime Venetian covering the race for LA City Council in CD-11. Have a take or tip on the race? Contact him at nantoni@mindspring.com