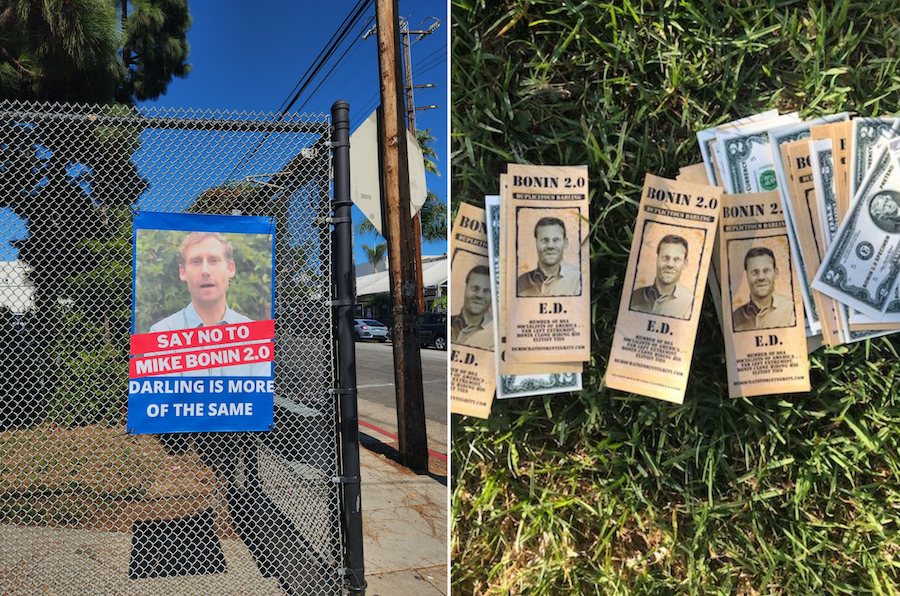 Park claims no knowledge of placards. While Mike Bonin is not on the ballot, his presence weighs heavily in race to succeed him in CD-11!

Describing Erin Darling as a “clone” of Mike Bonin in the race to succeed him in CD-11, mysterious posters placed on public property with no paid for tagline are sprouting around Venice and the rest of CD-11.

In an effort to link the retiring Mike Bonin with Erin Darling as a carbon copy of his policies and proposals, someone supporting Traci Park or opposing Erin Darling have stepped up their efforts to run against someone not on the ballot and no longer in the race in Bonin versus the actual first-place finisher in Darling, the June Primary winner.

We contacted candidate Traci Park directly and while she didn’t condemn the posters, she told us in an e-mail response she had nothing to do with the printing or placement.

“No, (the posters) were not created or placed by my campaign and no, I was not aware of it,” said the first-time candidate and Venice lawyer.

“All of my campaign materials have clear language indicating they are paid for by Traci Park for City Council 2022 – General. The same rules apply to all Independent Expenditure efforts,”

So who created these rather expensive vinyl posters as well as take the time to place them around the district?

That question remains unknown and unanswered.

We asked the candidate directly in what way her opponent Erin Darling was a “2.0” version of Mike Bonin?

Park in a submitted statement said Darling’s support of 41.18 while also claiming Darling “has been connected to the defund/abolish police movement.”

“Erin supports wasteful, ineffective projects like the Venice Median and projects that have made our communities less safe.”

The centerpiece of the Park campaign has been her law and order, right-of-center positions that have secured her strong support from the collective bargaining units that represent police and sheriff’s officers as well as firefighters at the municipal and county levels.

Park has been disturbed by comments she contributed to Darling as describing the failed recall efforts as “right wing,” and attributing a description of police unions as a “special interest.”

Darling was quick to retort.

“The bottom-line is obvious. Traci Park cannot win an issue-oriented exchange of ideas and her only hope of winning is running a nasty, negative campaign,” charged the candidate.

“Traci Park is a former Republican who is the most conservative candidate on the ballot for city council. She has accepted scores of financial support from GOP sources like former gubernatorial candidate Bill Simon, a former trustee of The Heritage Foundation which launched the presidential ambitions of Ronald Reagan. Mr. Simon was a supporter of former New York City Mayor and Trump lawyer Rudy Giuliani and the powerful Apartment Owner’s Lobby is supporting Park, an Alex Villanueva version of being a Democrat,” cautioned Darling.

Park stated Darling is a proponent of the Bonin road diets as well.

“Erin supports road diets and wants the Venice Blvd one extended, and just like Bonin, has never acknowledged the detrimental community and public safety impacts the Mar Vista road diet created,” noted Park in support of the premise made in these posters no one is seemingly taking credit or ownership.

Darling had a comfortable lead over Park in the June Primary that eliminated six other hopefuls. To date, none of the losing candidates have made an endorsement of either finalist, but Jim Murez, the President of the Venice Neighborhood Council has indicated Park as his preference.

“I think the reason I finished first is because we stayed the course and tried to tackle the tough issues with real responses and proposals,” offered the civil rights attorney who played varsity baseball and soccer in high school.

“Using the term 2.0, Traci Park is hinging her efforts on what can best be best described as political guilt by association. I have many elected Democrats supporting me. I am the Democratic preference in this race and she is the candidate of the right,” charged the Venice resident and surfer.

“I’m my own man. I have scores of supporters and overcame a 10-1 money advantage Park enjoyed in the primary and I’m no Democrat for political convenience. I’m talking to the issues and she is talking political rhetoric. I’m not sinking to that level of engagement,” offered the renter’s right advocate.

Calling Darling “more of the same” of Mike Bonin, the candidate himself called the posters “a dog that just won’t hunt.”

“This is certainly not a positive message of change. The voters know better and will see through it,” said the candidate.

“Traci’s campaign unfortunately is a one-trick pony and that single premise is to link me negatively to Mike no matter how false the narrative. Because you repeat something over and over again does not make it true,” offered Darling.

In response, Park countered and accused Darling of a “belated effort” to distance himself from Bonin, including removing Bonin’s endorsement from the materials he is distributing in the community.” But a review of the Darling website (www.erindarling11.com) still displayed Bonin as a prominent endorsee of the Venice tenant advocate and civil rights attorney. Darling has also picked up the support of the prominent 35,000 member United Teachers Los Angeles (UTLA), one of the most powerful public employee unions in all of southern California as well as the support of LAUSD board trustee and former state legislator, Jackie Goldberg (District-5).

“Traci is intentionally avoiding a side-by-side comparison with me. She is avoiding a direct comparison of my record versus hers. Let’s compare my commitment to Venice and the district with Traci. Let’s compare my career as a lawyer assisting working families and tenants versus the path she took. Unfortunately for Traci, Mike Bonin is not in this race and not on the ballot. I know she wants to run against him, but that isn’t the reality. I’m running a positive and issue-oriented campaign centered around a 5-point plan to tackle homelessness and street encampments. After running for a year, maybe Traci will finally offer a plan of her own,” countered Darling.

Darling also stressed that all the elected officeholders that currently represent the neighborhood of Venice at the city, county and state levels have endorsed him over Traci Park.

“Assemblymember Tina McKinnor, Senator Ben Allen, Supervisors Sheila Kuehl & Holly Mitchell, Assemblymember Richard Bloom along with the LA County Democratic Party and the Los Angeles Times are all backing me because I’m offering real solutions to problems like homelessness that demand results now. I was never a Republican like Traci and I never moved to Mono Lakes like my opponent. I’m a lifelong Venetian, born and bred and it would be an honor to serve this community, not trash it with this kind of mudslinging that in the end never works, but just infuriates voters who demand solutions to the challenges we all face like the unhoused that must be addressed now,” said Darling.

Nick Antonicello is a longtime Venetian covering the race in CD-11 to succeed Mike Bonin and how it will impact the neighborhood of Venice. Have a take or a tip on the race? Contact Antonicello via e-mail at nantoni@mindspring.com