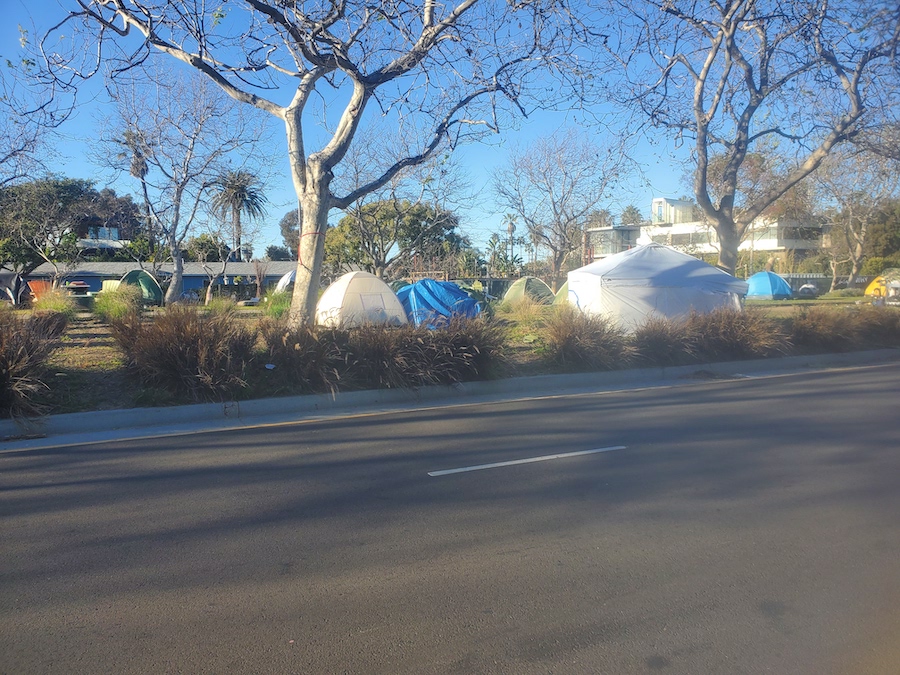 For when does a park become a “containment zone” for nearly one hundred tents and encamped structures just a stone’s throw away from the Venice Public Library?

But more importantly, who approved this “rezoning” of a park for this kind of usage?

Were residents of the neighborhood notified?

Was a meeting held with the actual tenants and homeowners weary from such unilateral action that never seems to have any public input or sentiment?

How does one transform a park, a public property into a potential ghetto or slum in the middle of a Venice neighborhood, a corridor which  brings people to Venice and the beach?

For camping in this park is not allowed, yet somehow goes on and continues and people like myself wonder why?

The park is supposedly closed at midnight which means those camped, partying and doing drugs and alcohol all day long should be made to leave and why in a neighborhood with such density have a park designed for strollers, dog walkers and kids become this overnight, high crime venue for people who for the most part just don’t belong?

For this enabling and expansion of public spaces for transients and the chronically homeless at Centennial Park is even more dangerous than the encampments that existed at the beach.

For now you have stationary recreational vehicles and vans sprouting along both sides of Venice Boulevard, the perfect storm to rationalize that Venice needs to surrender what slither of public space it has to those who are at the source of crime and chaos on our streets today!

For after all, the “not-for-profit” bureaucrats who don’t actually live here, but earn their pay assisting these “new neighbors” and the cottage industry of homelessness are dictating the conversation and the rules of the game, and that is Venice has this moral obligation to tolerate these third-world, drug infested conditions we see off Rose, on Third, Flower, Lincoln and of course, still at the beach!

In the minds of these “do-gooders” at the expense of others, we’re just NIMBY; racists and segregationists because we want our streets and public space to be clean, safe and immune from drug deals and the illegal activities that are obvious and rampant wherever these encampments dwell and swell!

And while our “lame-duck” Councilman Mike Bonin buries his head in the sand and continues to collect a paycheck through the end of the year, his indifference and inaction is somehow tolerated even though he readily admitted in his withdrawal for reelection that he suffers with bouts of depression.

So the question remains, if that is the case, why doesn’t Bonin resign and retire and let the residents of District 11 pick a replacement?

She resigned effective immediately letting voters pick a replacement in a special election scheduled for April 5th. She graciously moved on and moved over because she understands that government must go on!

That’s what a professional public servant does. They allow for some governmental continuity, that the people get to choose meaningful representation. Representation that’s actually reflective of those who are residents, taxpayers, homeowners and tenants.

And speaking of representation, what is our grass roots neighborhood council doing to truly stop this true “monster” on the median?

If you’re upset with this ever growing and expanding encampment, contact the VNC at board@venicenc.org and tell them you want some semblance of action moving forward!

And now that we have a dozen candidates seeking to replace Mike Bonin, will any of them go on the record and support the removal of this encampment at Centennial Park?

Venetians are exhausted by COVID-19 and weary by the never ending battle to prevent more encampments on our streets, parks and other public parcels.

Reach out to these candidates and seek out their voice and help so this proliferation of park space for transient living on the streets of Venice finally stops and discontinues.

The author is a longtime Venetian who is covering issues and campaigns that effect Dog Town. Mr. Antonicello can be reached at (310) 621-3775 or via e-mail at nantoni@mindspring.com