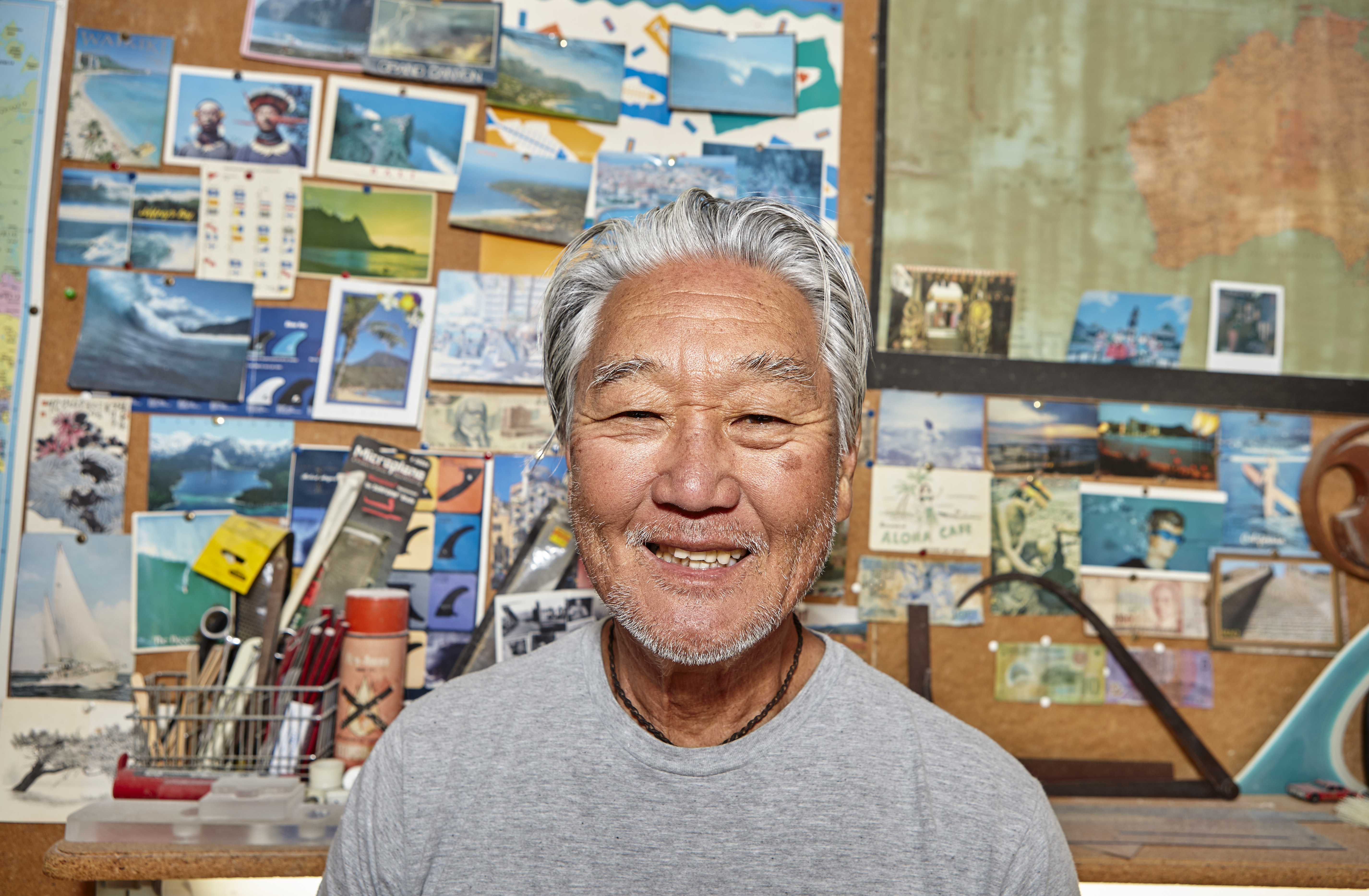 A look into the workshop of long-time Venice surfboard shaper.

Tacked to the walls of his shaping room is a worldly array of surf photos and while he is well-traveled, Okazaki has lived in Venice for over 60 years.

Okazaki is one of the most prominent surfboard shapers in Venice and riders can be spotted riding his boards from County Line to Palos Verdes. While he has been a fixture in the Venice Beach surf scene for over 50 years he caught his first wave 2,400 miles across the Pacific Ocean at Waikiki Beach in Hawaii. Okazaki was born in Hawaii, and like many kids who grew up there learned to surf at a young age.

“My dad surfs, so he just had me on a surfboard from the time I was a little kid,” Okazaki said. “It was not as though I was unusual, gifted or blessed. Surfing was just one of the things you did at the beach and we lived really close to the beach, so we were sort of always there.”

When Okazaki and his family moved to Venice in 1957 he did not initially surf despite being so close to the ocean.

“It was too cold compared to Hawaii!” Okazaki laughed.

He went to the beach frequently to fish and dive and like any surfer could only watch so many waves go unridden. A few years after moving to Venice, Okazaki was back on a surfboard.

As Okazaki was getting back into surfing, a revolution was taking place within the sport. Up until this time, surfboards were very long, usually between 8 and 12 feet. In the late 1960s, however, a group of young Australian surfers began making shorter boards, some no more than 5 feet long. These “shortboards” were faster and offered more maneuverability than longboards but did not immediately gain popularity in the United States.

Okazaki tried to get the shapers at Weber Surfboards in Venice to make him a shortboard but they were too busy making longboards. They did, however, let Okazaki use the shop to shape his own boards after business hours.

“They were so generous, they just basically told me if I hung out after they were done working, I could stay in the shop and make boards there,” Okazaki said.

With a quiver of shortboards, Okazaki began competing in surf contests. This gave him the opportunity to travel around the world and learn what other surfboard shapers were doing. In an area before the widespread availability of information on the internet, this experience proved invaluable.

“I was able to travel to Hawaii, Australia and New Zealand. Very few people in California were able to experience that and the magazines were sort of a year behind the times,” Okazaki said. “I was fortunate to see what the Australians were doing: uber short, wide surfboards. And then what the guys in Hawaii were doing with the mini-guns they were shaping, and so I was able to fuse the two together.”

Okazaki initially had no intention of making a career out of surfboard shaping. At the time his focus was on competing, surfing well and traveling. People soon began to notice his boards and how they were well-suited to everyday surfing in Venice and Southern California.

“I had no intention of starting a business. It was strictly to create boards for myself to surf, and they were pretty good compared to everyone else’s,” Okazaki recalled.

The first shortboards to arrive in Southern California were modeled after the high-performance boards coming out of Hawaii. The summer swells that bring waves to Malibu and Venice, however, are much more mellow than the large winter swells that surfers ride in Hawaii. Therefore, these Hawaiian shortboards were not very compatible for a surfer in Venice.

“I would not copy them exactly because they are not transferable to California and Venice and that’s why it was really beneficial to travel to Australia because the Australian waves are a lot like California’s waves,” Okazaki explained. “They were adapting shorter, wider surfboards, and that was kind of the ‘a-ha’ moment for me.”

Over the years since, Okazaki has made a name for himself by shaping boards that facilitate high-performance surfing on the not-so-high-performance waves of Venice and while the waves have remained the same, the surf scene has changed quite a bit.

“It has gone from a very small, sort of niche sport and culture, to what it is worldwide now; it is everywhere. We got three surf shops on Washington Blvd,” Okazaki elaborated. “That’s sort of indicative of the metaphor for how it’s changed because when I was a kid you would not even see a surfboard, and now they are everywhere.”

Despite having more boards at his disposal than an average surfer, Okazaki still finds himself back in the shaping room every day on the never-ending quest for the perfect board.

“If I don’t like a board, I’m back in the shop. If I’m happy with the board, I’m back in there too, because if a board is good and I just change it a bit, it could be even better, so that quest for the perfect board still keeps me up at night,” Okazaki said. “I’ve learned to enjoy it. I am at the point in my life where you don’t really have to be that busy.”

This passion is what also keeps Okazaki out in the water surfing, day in, day out.

“Once you get a good wave, then you just want to go back for more. It feeds itself,” Okazaki added.

To check out Okazaki’s boards head to: guyokazaki.com