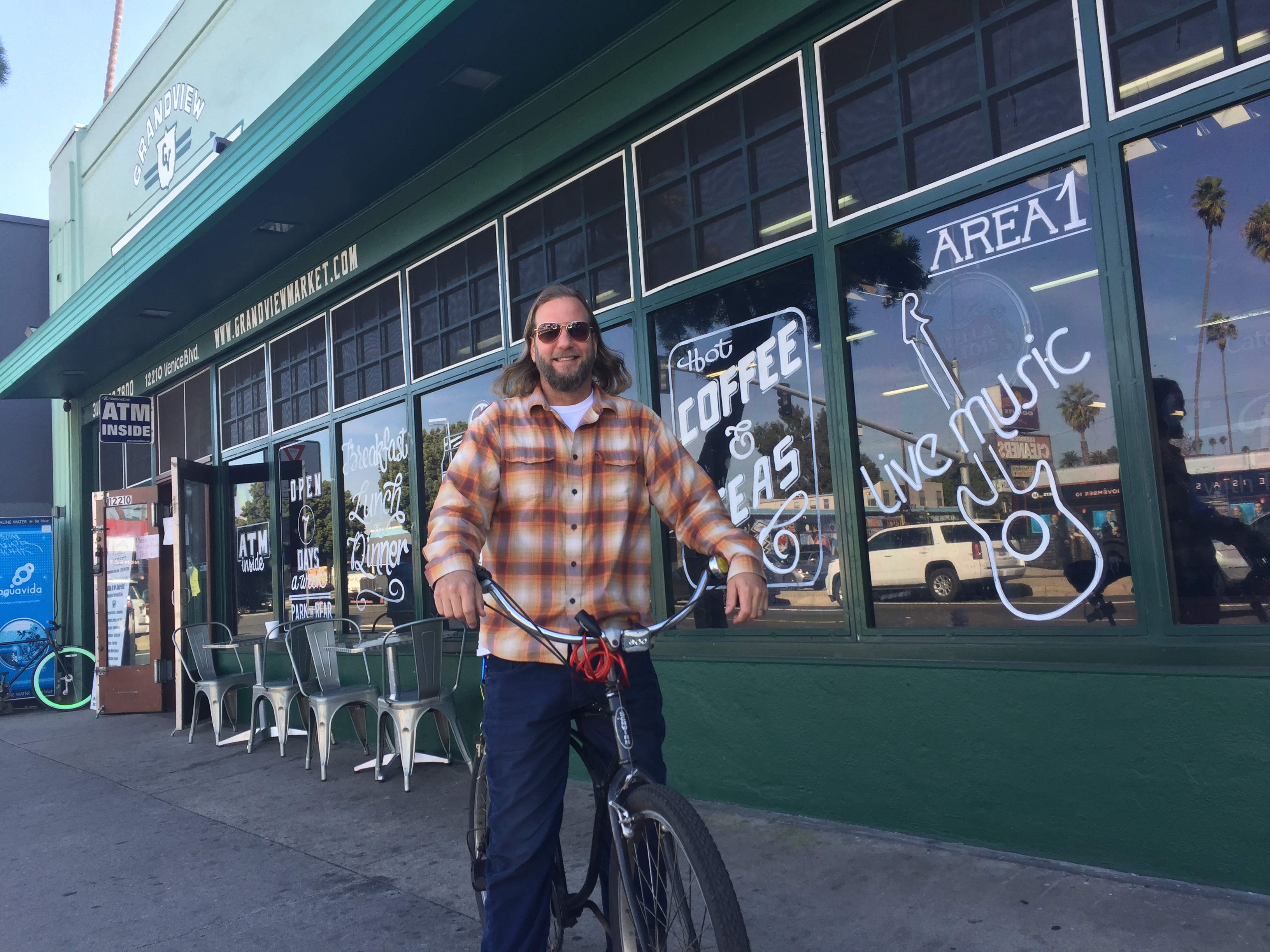 On a summer’s night in Nashville, Venice born and raised bass player, Doug Swanson met a girl. They got talking. He found out not only was she also from Venice, but they both grew up in the same neighborhood and had both gone to Venice High.

“She was a cheerleader in my brother’s football team. She didn’t even know my brother had a brother,” he told Yo! Venice over a bagel, chips, and salsa at Grandview Market in Mar Vista.

A Venice girl on holidays, sushi chef Nikki Gilbert was in Nashville to see a band. Cut to: Swanson and Gilbert get married. Refusing to let distance keep them apart but also respecting each other’s careers in different regions of the country, Swanson and Gilbert now share life between Tennessee and California.

For love and family, Doug Swanson returns home to Venice three times a year. “Mother’s Day, August, and Winter,” he told Yo! Venice. And, every time he is back, he jumps onstage at The Cinema Bar in Culver City for a jam with his buddies. All working musicians, getting together for a Bluegrass, rock, blues, funk extravaganza. “It’s a real dive bar. The oldest Honky Tonk bar in Culver City and the owner lets me play whenever I’m back in town,” said Swanson.

The Venice born and raised bass player moved away to Nashville ten years ago chasing life as a professional musician. Within weeks of landing in Tennessee Swanson found an agent he’d hoped could help him score gigs as a bassist. Instead, she got him on television.

Rather than jamming on stage, Swanson found himself on set shooting the pilot for ABC’s Nashville. He didn’t expect any more than a day’s work after booking a small co-star as a member of character Deacon Claybourne’s posse. Actor Charles Esten plays Claybourne. However, the pilot was picked up, and Swanson found himself quite often stepping into the role of Monty Handsome, even now the show has moved across to CMT. “Whenever Deacon’s posse is needed, I get a call,” said Swanson.

While TV stardom has made his Mom happy, “she Tivos it and tells all her friends,” Swanson said he never had any intention of acting. However, as a new musician in Nashville, he found the role helped open doors. Still, it took Swanson around five years to build his career to where it is now. These days he works consistently and is often on the road touring with big names. Swanson also writes and co-writes music. His song “Sinner” being one example. And, thanks to his TV role, “my friends all call me Monty,” he said.

Swanson picked up a guitar at ten learning to play at McCabe’s Guitar Shop, which is still open today at 3101 Pico Blvd., in Santa Monica. He played guitar for nine years before discovering bass. It was love. “It’s the rhythm. It’s the boogie that makes all the girls dance,” he said. “And if you look at the bass player, they’re usually the coolest guy or girl in the band.” According to Swanson; “guitarists have their thing going on. Drummers get all the chicks, we (bass players) carry all the melody. We carry the rhythm in the room.”

An award-winning musician, Swanson has endorsements with Fender Basses, Vans, and Ampeg bass amps. He exclusively uses Ernie Ball strings whether playing bass or acoustic guitar. “It’s actually a really cool life, but it took me a long time to work on it,” he said adding how good it felt to be “in the mix as a Nashville musician.”

Nashville has given Swanson an opportunity bigger than anything Los Angeles could provide. Consistently on stage touring with bands playing live shows, he told Yo! Venice there wasn’t the same opportunity anymore in his hometown. “L.A. in general, the music scene is zero.” Swanson blames this on a new pace of life in the city. “Ten years ago you could make a living playing in L.A., but people don’t go out and see live music like they did ten years ago. They don’t have time to slow down and see a good rock band.”

The changing face of Los Angeles confronts Swanson most when it comes to Venice. “It’s hard to come back and see my town as they say ‘so gentrified.’ I don’t want to put anyone down or be negative. At least it still has the beach, the bike path, and skate path,” and, he added, art, “the thing about Venice that I love is that it is so supportive of its artists.”

As a kid in the 70’s Swanson said, the neighborhood “was awesome.” He remembers healthy, tanned bodies, a by-product of the beach and bodybuilding culture.

Swanson’s father was the Assistant Dean at the UCLA Medical Center for 35-years and also, one of the original Gold’s Gym Muscle Pit guys from the 60s. “Because my Dad was a doctor, Arnold, Franco, and Dave were always at the house talking about diet and nutrition,” said Swanson referring to the world famous bodybuilders, Arnold Schwarzenegger, Franco Columbu, and Dave Draper. “Dad is 85, and he still goes to Gold’s.”

Golden sunshine, surf, sand, and tans aside, Swanson said Venice still had it’s “gnarly and tough” side. “We’d fight the Crips, but they liked us. We were the long-haired surfers that played in rock bands. We rode beach cruisers everywhere. Still, do,” he said gesturing toward the door outside which his cruiser leaned, chained to a parking sign.

Catch Swanson on stage at The Cinema Bar, 3967 Sepulveda Blvd, Culver City Saturday night, December 9, after 8:30 pm. It is a free gig. No cover. Swanson said he tells his friends to BYO tacos from Tito’s and enter from the back alley.