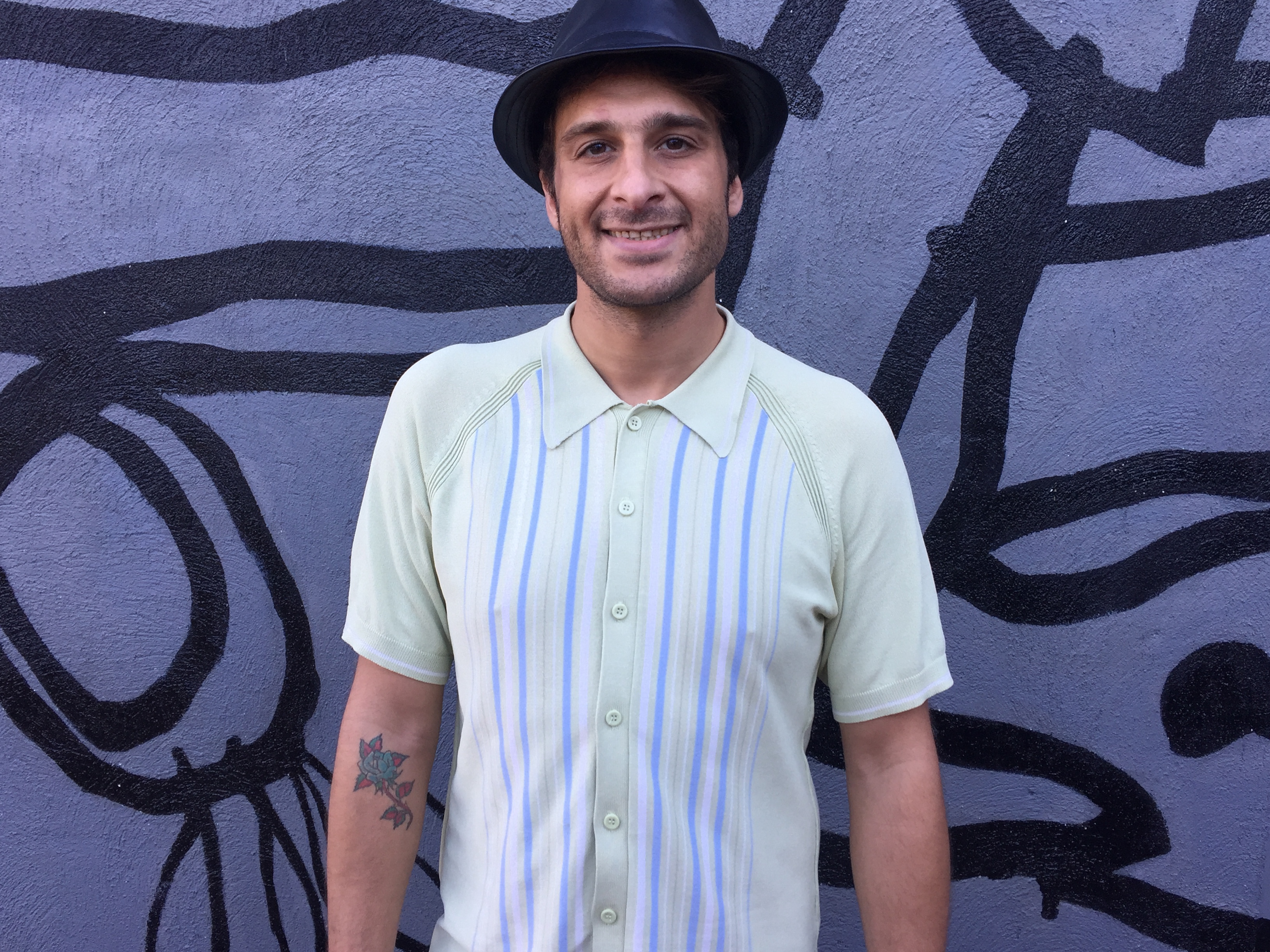 The girl who sat next to Randy Bernard in first grade would pay ten cents to push him off his chair. Sitting sipping coffee at Deus Ex Machina in Venice, Bernard explained the game was a tipping point that led to years of Adderall dependency.

Bernard is an artist. He moved to Venice from Ohio, running away from addiction while chasing a Gonzo inspired existence. Like most young artists, Bernard struggled to make rent. He soon found himself on the streets.

Just when Bernard thought he’d hit rock bottom Will Hawkins, Chair of the Venice Neighborhood Council Homeless Committee, stepped in helping the artist back on his feet via the Committee’s Reunification Program. The Program reunites those homeless with family members and helps get lives back on track.

For Bernard, this meant going back to where it started.

“She thought it was funny, I guess. And so did I,” said Bernard remembering his school friend’s childish game. However, his teacher blamed the antic on a lack of concentration sent Bernard to the school counselor “at a time when they were all saying everyone had ADHD,” Bernard said.

After years resisting, often spitting the medication down the sink, in his teens Bernard discovered Adderall helped his drawing by increasing his focus and lifting resistance around starting new art projects. However, the more he took, the more he needed.

In his final year of art school, Bernard lit a car on fire. Some guys had beat up his friends, so he burned their car as retaliation. Police arrested him at the scene. “I just stood there and watched it go up in flames, and I didn’t care about the consequences.” The arson led to six months in jail and an end to art school.

Desperate to leave Adderall behind, Bernard ran away to Venice. “I knew a change of scenery was the only way I could escape my dependency,” he explained. Initially, he rented an apartment for $2000 a month and drew sketches for tourists on the Boardwalk. “There’s a whole lot of politics that go on down there that you don’t see on the surface,” he said. The OG Artists who have worked Ocean Front Walk for years are wary of competition, and Bernard explained he had to tread with caution.

Splitting his time drawing between Venice and Hollywood, some days he cleared a hundred dollars. However, juggling street politics and lean days made making enough to cover rent a struggle.

Not wanting to sacrifice his art, Bernard chose homelessness believing it would free him up to focus on his drawing.  Posting social media updates he tried to remain positive about his struggle on the streets but the real was fast cracking through the glow of his Gonzonian dream.

“It’s not the same world it was when Jack Kerouac was traveling and writing.  It’s extremely dangerous to assume that you can go on an adventure like that and everything will be fine. There are people out there just looking for young wanderers to abduct, exploit, or even kill,” he said.

Moving location each night so as not to become an easy target and sleeping with one eye open made it harder and harder for Bernard to work on his art, much less get a “day job” to help him back on his feet.

“You can never really get a good night’s rest. The shelters are swarmed with smack offs and degenerates. Nothing is convenient. You have to plan your day around where you’re going to eat next or sleep next. By the time you get to the next place you’re going, you are exhausted,” explained Bernard.

Hawkins first met Bernard while he still had a roof over his head.  The two became Facebook friends. “Randy came to know me through an online interview with Yo! Venice during the VNC election. He came to the election party at my house, and we stayed in touch,” said Hawkins.

It was a Facebook post that prompted Hawkins to reach out to Bernard. His sketchbook stolen, the artist had tried to romanticize his predicament writing that he had “slept under the light of the Venice moon.” Hawkins called bullshit posting a reply that read, “The days of Kerouac are over, and Venice is a very dangerous place.”

At the time the VNC Homeless Committee were reaching out to help people home for the holidays with the support from their Reunification Program.

Like many homeless Bernard had been fleeced of official identification papers and his credit card. He couldn’t get a bus ticket without it and had found himself stuck in a cruel loop of needing ID to get an ID. An obstacle Hawkins was able to help Bernard overcome.

“I had lost my license. I had lost my social security card. I was screwed. I didnt have a phone either. If Will didn’t step in, I wouldn’t have been able to go home for Christmas and see my family. I would have been stuck on the street because you can’t do anything without an ID or a credit card.”

Working with St Joeseph’s and Safe Place for Youth, the VNC Homeless Committee can help local homeless people access services that they might not otherwise know exist.

Back home in Ohio Bernard was able to regroup, his heart always set on returning to Venice, he worked drawing commissions and teaching art to kids. “Having that allowed me to get back on my feet and ready to approach my life again with a healthy swing,” he said.

Experiencing homelessness left Bernard feeling a great divide between those housed and those unhoused.

The biggest misconception is that people out in the ‘big room’ are lazy or can just change their situation easily or that there is help or shelters for them. That is all bullshit. There are a number of people who are lazy and hopeless, but realistically it is exhausting out there,” he said.

To top it off, Bernard said job hunting becomes near to impossible. “Good luck looking for a job when you have a bag and sweat is pouring out of you. No one is going to hire you.” Bernard explained this is why most stop trying.

“It gets to you after a while,” Bernard said explaining that while he didn’t think being homeless made you a lesser person, he began to feel judged by others. “People look down on you or worse, don’t look at you at all. They’ll walk past like you’re a tree or a bench, and pretty soon you start believing you’re less of a person because of it,” he said.

Hawkins explained that each person on the street costs the city of Los Angeles up to $75,000 per person in housing and services. “So far we’ve spent less than $5,000 to save the city around $1,000,000 in just ten months. What’s great about this program is that it doesn’t cost taxpayers anything as it is completely financed by donations.”

The Reunification Program covers travel costs and gets those homeless back to the friends or family who can help put a roof over their head. “We’ve housed 18 homeless people since we launched this program last December,” said Hawkins.

Now that he is back on track being homeless again is not an option for Bernard, “it’s far more commendable to approach your pursuit with concern for your well being and health. This is the tool that’s gonna make your 9th symphony. Your Mona Lisa. Besides, how do you expect anyone to respect you as an artist or your work when you don’t have respect for yourself?”