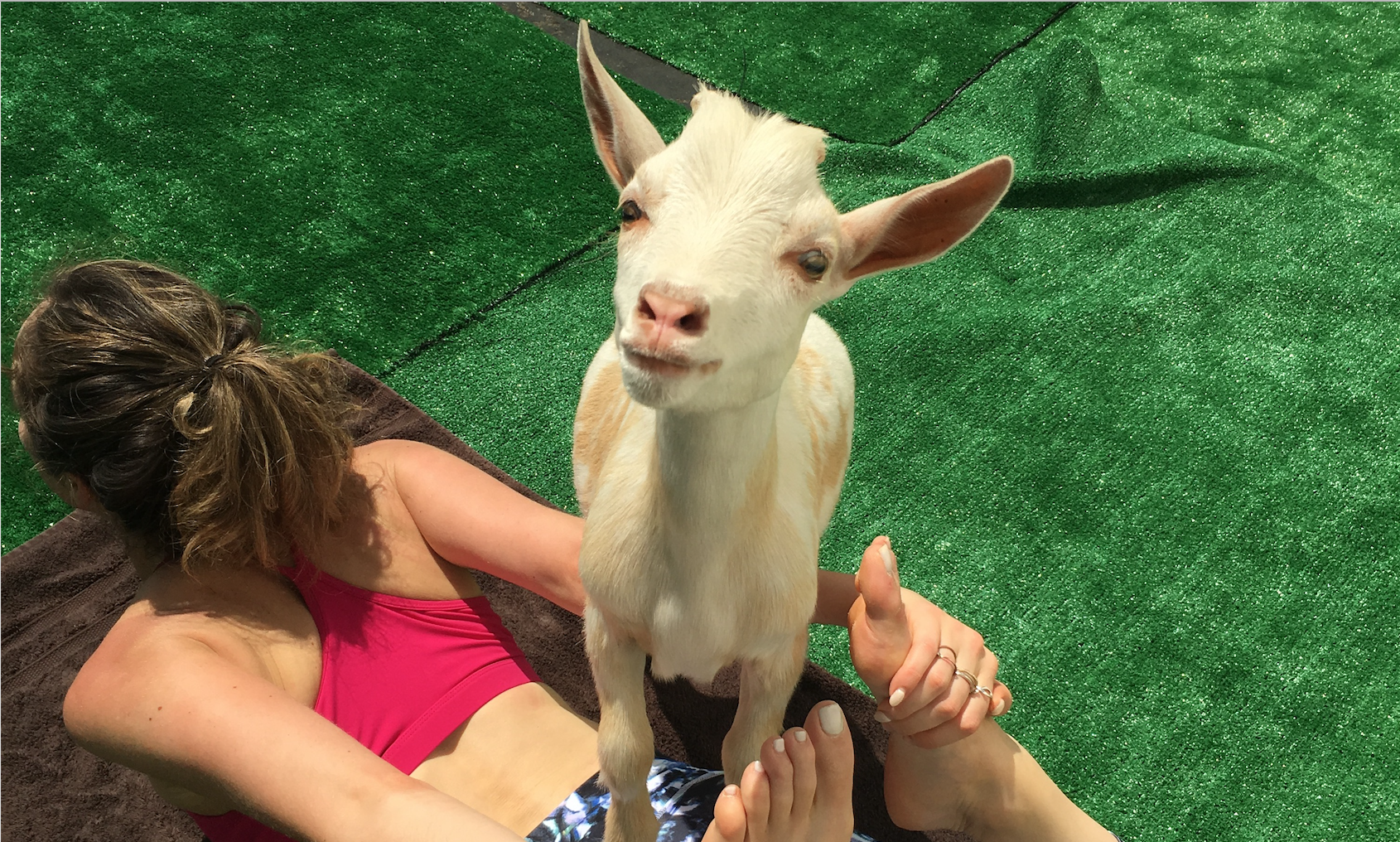 On Saturday, September 30 a crowd gathered at Open Temple on Electric Avenue in Venice for a High Holiday yoga wind-down.

People settled into child’s pose. Calm washed across the room.

Then, the goats came.

They jumped on backs and pooped on heads. Chaos took over, and even the most hardcore yogi had a tough time keeping a straight face. Fumbling with smartphones, everyone got snapping. Laughing. Squealing.

Smiling, yoga instructor Galeit Sehayek continued to guide the class through asanas as Michelle Tritten weaved through a sea of bodies with her two baby Nigerian Dwarf goats, Floyd and Roscoe.

While some grimaced and one or two complained the goat hooves were painful, most were laughing and requesting an encore. For Floyd and Roscoe, it seemed like a game. As soon as someone was cat-cowing, they were climbing, their warm hooves trampling knots and kneading kinks.

Sehayek explained goat yoga brings all the regular health benefits of your garden variety yoga with the added benefit of animal therapy.

“There’s something about these little animals that aren’t afraid to connect with you. They’ll jump on you. They’ll go under you. And, there’s nothing cuter than baby goats,” said Sehayek.

With two goats and a friend who is a yoga instructor, goat yoga seemed an utterly logical endeavor for Michelle Tritten who runs Hello Critter Goat Yoga.

As much as Goat Yoga sounds like one of the crazier fads to trot through Los Angeles, there is something that brings the regulars coming back for more, poop and all. On that, goats do drop a lot of pellets, but it doesn’t smell is easy to clean, and Tritten’s mom Donna is on standby, broom at the ready.

Floyd and Roscoe will be back in Venice on October 22 for a charity yoga session to benefit animals affected by Texas Hurricane Harvey. For details check out the Hello Critter Goat Yoga page on Facebook.

And for special occasions, Floyd and Roscoe will travel wherever they are needed to jump atop a downward dog.