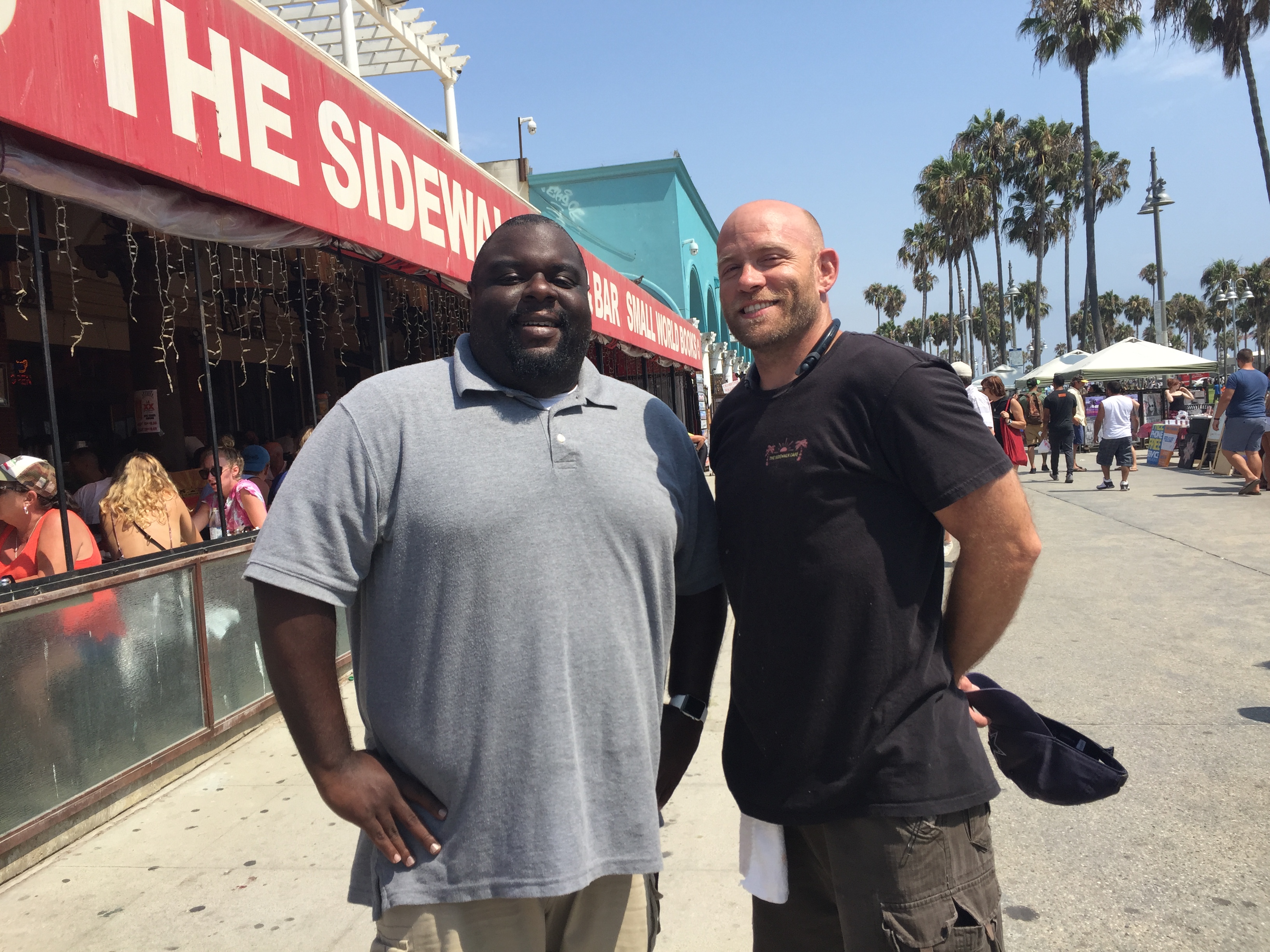 How two local café workers raced into a burning apartment complex to save people and pets.

The smell of stale smoke tinges the air down the beach end of Horizon Avenue in Venice. A two-story blue stucco apartment complex stands empty. Soot stains and dirty water marks cover the exterior of the building. Most of the roof is now a pile of burnt wood and insulation that clogs the sidewalk.

On Saturday, July 15, firefighters dispatched at 12:57 p.m. to an apartment burning at 33 E. Horizon Avenue. Smoke and flames billowed out of the left side unit on the second floor. However, in the moments before Los Angeles Fire Department (LAFD) trucks arrived on the scene, Brandon Daniel and Jason Kirkham, two employees of Venice’s Sidewalk Café, raced toward the chaos.

Restaurant Manager at the café, Daniel, said he was sitting at home in his apartment, also on Horizon Avenue. “I smelt burning wires, like plastic, so I jumped up thinking it was my place. Once I opened the door, I saw all the smoke.”

Daniel said he grabbed his shoes and ran down onto the street where he saw Kirkham, who had run over from Sidewalk Café where he works as a cook. A friend of Kirkham’s, who works at the tattoo parlor across from the café, had pointed out the smoke to Kirkham, who left his phone with his buddy and raced toward the fiery building.

“I jumped the gate and went upstairs where the fire was. I started beating on the doors yelling ‘fire, fire, fire’ and this lady came out behind me, and she said ‘there’s a fire’ and I said “yeah, there’s a fire, yes ma’am, you need to get out of here,’” Kirkham told Yo! Venice.

At this point, the fire was ablaze. Kirkham kicked in the door looking for anyone trapped inside the burning apartment. “The smoke came real hard, so I got down real low, and I crawled in about body length, and I hollered and hollered,” he said.

The lady Kirkham had told to leave the building, called out telling him there was no one in the apartment. “I should have followed through and checked, but it was just scary as heck. It was already engulfed in flames and smoke,” Kirkham said.

Leaving was the right choice. The people who lived in the unit were not home. However, Kirkham learned, next-door lived a cat, and the owners were out for the day, “so I kicked their door in too, and I went in there, and I got their cat.” After this, Kirkham checked the bottom units. “That’s when Brandon came over with the fire extinguisher, and I thought I’d go back up and give it a shot,” said Kirkham.

Before joining the Sidewalk Café team, Daniel spent nine years working as an EMT. He told Yo! Venice when he realized there was a fire, his prior training kicked in, compelled to “jump at it” to make sure no one was in danger inside the burning apartment. “I saw all these people watching, and I thought why watch? I’d rather just help,” said Daniel.

Still on the scene, Kirkham raced back up to the blazing unit. “I took the fire extinguisher upstairs, and I kicked the door open again,” he said. However, the small fire extinguisher stood no chance against the fire.

“Everything was just raining down. The fire, the beams, the rafters. I mean there was no way I could get in there. I did hit it with the fire extinguisher the best I could, but it didn’t do anything but compound the smoke and the smell. The coughing, the gagging, it was really bad,” Kirkham told Yo! Venice.

By this time, the fire department had arrived and “my job was done,” said Kirkham. Happy no-one was in the building, and all animals were safe, Kirkham quietly headed back to work.

Knocking back any suggestion he acted a hero, Kirkham said, “it’s just the way I was raised. When the lady said their was animals in the house I thought, my Mom would say the same thing. My Mom would say, ‘get the babies out. So that was my first thinking.”

Kristen Archival is the General Manager at Sidewalk Café. “They were real first responders. I’m so proud of them acting.” Archival explained to Yo! Venice that Kirkham and Daniel had run toward the fire “without hesitation.” She said it was a heroic example of how much her team cared about Venice and always seemed to put the community first.

While Daniel and Kirkham acted like heroes, LAFD Battalion Chief Anthony Matthews warns of the dangers. “First thing to do is call 911 and get emergency services out here right away,” Matthews told Yo! Venice. Which is what Daniels said he made sure had happened before he raced toward the fire.

As far as kicking in doors, Matthews said, “when you do kick in a door, especially a door where a fire is, it can cause additional issues like adding more air or oxygen to it, which can intensify the fire.” However, he said it is a “judgment call because, especially in the other two units where there was no fire, you could actually help somebody or save a life. You just have to be aware and be careful. We would normally say call 911 and see what you can do from the outside unless you hear somebody yelling or screaming for help.”

LAFD’s Brian Humphrey said crews had the fire out within 32 minutes of their arrival. “They had it taken care of quick. They were in a situation, and they handled it really fast. Real professional,” said Kirkham.

No injuries were reported. The cause of the fire is under investigation. However Matthews told Yo! Venice they expect it was electrical, “that’s what it appears to be. I can’t say 100-percent that’s what it is but that’s what we kind of surmise it to be.”

Daniels said his neighbors had been forced into hotels and onto friends couches. However, he wanted them to know anything they need, the neighborhood and Sidewalk Café is ready to help. “Block-wise it brought us closer. Everyone is helping each other out. We bought some food to them,” he said.

According to Daniels, his neighbors heard it would be at least six months before anyone might be able to move back into the building. “They have a lot of property damage but luckily (for the people in the unit that burned) they have renters insurance,” he said.

While the fire was a traumatic event for the neighborhood, Kirkham said he wants the people from the apartment complex at 33 E. Horizon Avenue to know Venice is there for them. “We’ve got a network of people here in this community that will help out in anyway.”

Thanks to Venice photographer Steve Christensen for sharing photos of the fire with Yo! Venice. See more of Steve’s work online at www.stevechristensenphoto.com.