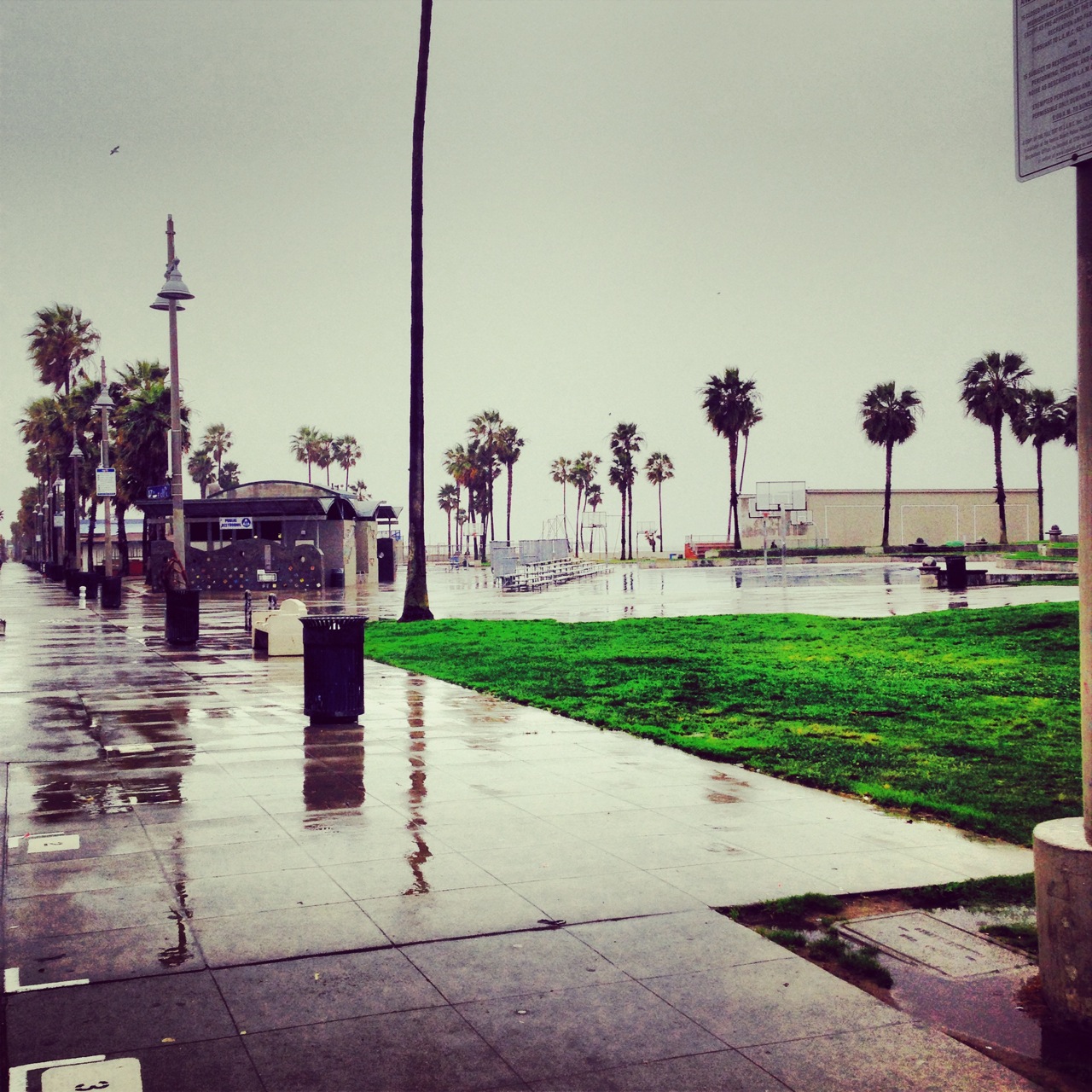 A powerful Pacific storm is forecast to unleash more downpours in the Southland today amid fierce winds and perhaps trigger thunderstorms, prompting the National Weather Service to place the region under a flash flood watch one day after rainfall records were set, including just under 4 inches in Long Beach.

Today will be see nothing like the the lengthy bouts of heavy rainfall that drenched the region Sunday, said National Weather Service meteorologist Dave Bruno. Instead, it will be a highly variable day, with “a good part of the day rain-free” but interspersed with episodes of rain and possibly thunderstorms popping up without warning before the storm clears out tonight, he said.

Rain on the boardwalk on Friday.

Some 7,700 customers of the Los Angeles Department of Water and Power
are without power this morning as a result of storm-related damages. So are 477
Southern California Edison customers in L-A County and 4,00 more in Orange
County, including 2,200 in Irvine, 500 in Santa Ana and 200 in Huntington
Beach.

Several National Weather Service warnings were in effect besides the flash flood watch affecting Los Angeles and Orange counties. A winter storm warning denoting highly challenging travel conditions will be in effect until 6 p.m. today, a small craft advisory pointing to hazardous sailing conditions will expire only at 6 Tuesday morning, a high surf advisory will be in force until 6 p.m. Tuesday, and a high surf warning will be in effect in Orange County until 10 p.m. Tuesday.

Dangerous conditions characterized by waves of up to 18 feet were reported in the Pacific Ocean while heavy snow accumulation was occurring in the San Gabriel Mountains, where the winter storm warning denoted highly challenging travel conditions. The snow level is expected to drop to around 4,000 feet, which may result in accumulating snow on The Grapevine, possibly resulting in a closure of Interstate 5 near the Tejon Pass.

The NWS summed up the raft of weather challenges the region is facing
today as a result of the storm, the third in a series of three that began last
week, this way:

“Potential impacts include the possibility of flash flooding for all areas due to heavy downpours and isolated thunderstorms, debris flows for recent burn areas, rock and mudslides along canyon roads, urban and small stream flooding, significant travel delays, downed trees and isolated power outages, and dangerous winter driving conditions in the mountains.”

Along the coast, high surf generated by storms over recent days will continue to batter beaches through Tuesday, NWS forecasters said. As a result, there will continue to be beach erosion, dangerous rip currents, and sneaker waves that can suddenly knock people of jetties and rocks, according to the NWS.

“Those planning to visit the coast during this time should use extreme caution on area beaches, stay well back from the water, stay off of jetties and rocks, and never turn your back on the ocean,” a statement said. “Much larger waves called sneaker waves may wash onshore suddenly without warning.” Out in the ocean, “a period of very dangerous sea conditions is expected for mariners through today,” a statement said.

Large seas are expected, with 10-18 foot waves for the outer waters and along the Central
Coast, and 8-12 foot waves for the inner waters south of Point Conception. “Seas this large may result in dangerous breaking waves near shore which can capsize boats,” the statement said, adding that the Morro Bay and Ventura harbor entrances, in San Luis Obispo and Ventura counties, respectively, “will be especially treacherous.”

There is also “a slight chance of thunderstorms (at sea), along with the possibility of isolated waterspouts.,” the statement said, adding that “mariners without proper experience should seek safe harbor, or remain in port, prior to the onset of hazardous conditions.”

In the San Gabriels, 12 to 18 inches of snow are expected to accumulate above 7,000 feet, and, by tonight, 1-2 inches at 4,000 feet, which likely will leave I-5 covered, according to the NWS. At the same time, fierce winds will lash away in the mountains, with gusts of more than 70 miles per hour likely. “Icy conditions with low visibility from blowing snow, and fog, will make for dangerous mountain driving conditions,” the statement said.

Windy conditions were also reported in the Antelope Valley, where a wind advisory was scheduled to be in force until 9 a this morning. The wind is expected to blow at 20-30 mph, with 50-mph gusts, forecasters said. No other wind advisories were in effect this morning.

Showers were forecast in L.A. County today, along with highs of 37 degrees Fahrenheit on Mount Wilson; 48 in Palmdale and Lancaster; 50 in Saugus; 54 in Pasadena and Burbank; 55 in San Gabriel and Woodland Hills; 57 at LAX; 58 in Downtown L.A. and Long Beach; and 59 in Avalon.

Showers were forecast in Orange County today, along with highs of 53 in
Yorba Linda and Mission Viejo; 55 in Irvine, Anaheim, Fullerton and Laguna
Beach; and 56 in Newport Beach and San Clemente.

Temperatures will be about the same amid partly cloudy skies Tuesday, then rise 3-5 degrees under sunny skies Wednesday. Sunny conditions will persist several days.