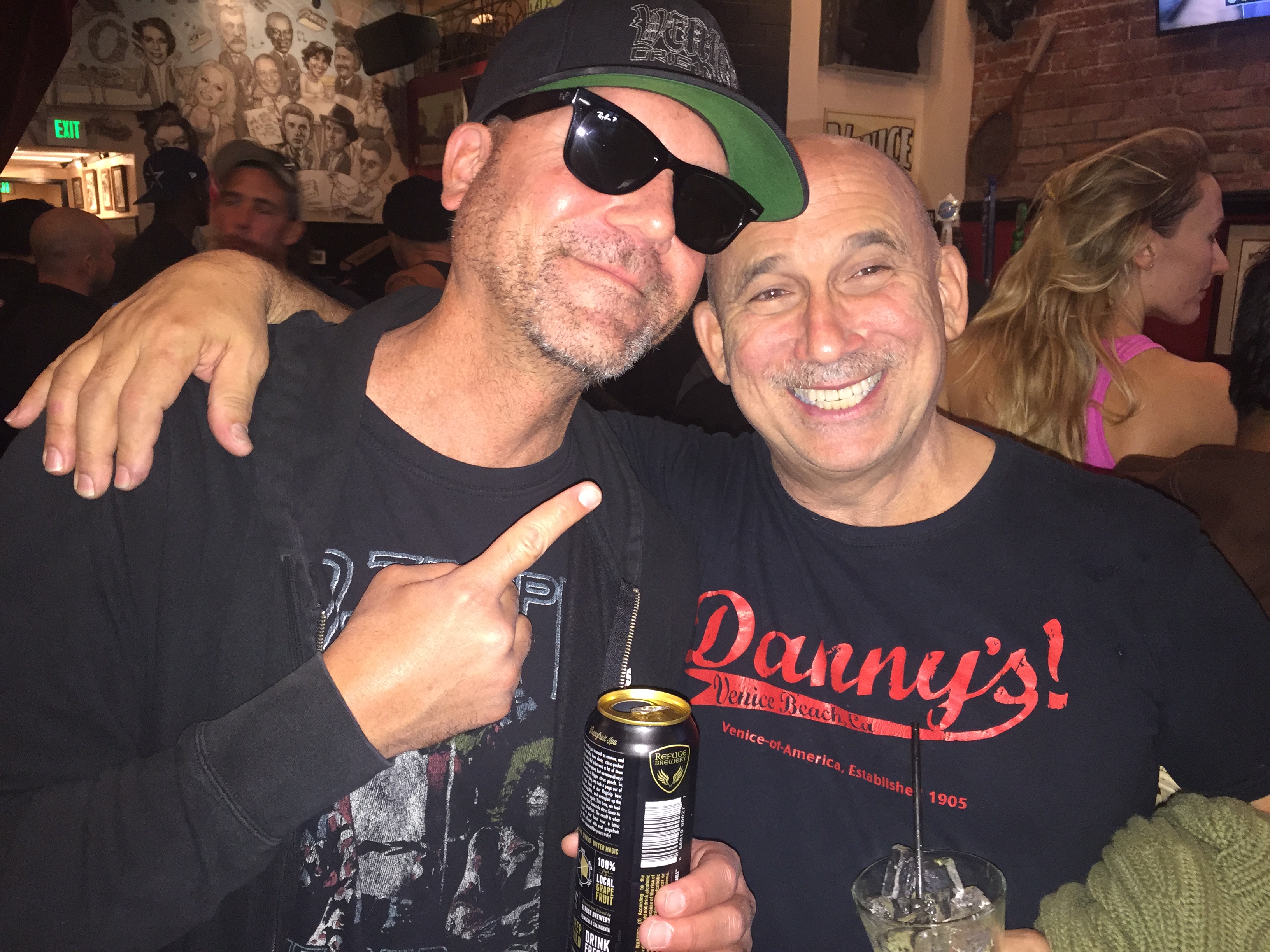 It was as if the sky were crying. Rare Los Angeles rain fell like tears from the gray. A mishmash of Venice characters gathered to bid farewell on Sunday to Danny’s, which closed for good after ten years of business. The bar & restaurant is quintessential Venice with its eclectic mix of eccentrics and those on a not-quiet holy pilgrimage to tourism’s Promised Land.

She poses for a photo with Danny’s regular, Rob Valley.

Not everyone at Danny’s answers to their real name. It’s like a club, and even if you’re not a local or a regular, you feel as if you could be.

Joey of Venice and JT the “King of Pool in Venice” are legit regulars. They reminisce. Remembering not just the years they’ve spent at Danny’s, but the years they spent in the place before it was Danny’s. They are friends with Triple OG Venice Snoop, who has his name on the wall of a store at Main and Horizon. He’s been coming here for 40 years. “When it was St Mark’s,” he says.

Venice Snoop is angry. “I feel frustrated with the way Venice is heading. They’re pushing all the locals out, but we made Venice what it is,” he says.

Word around the neighborhood was that Snapchat is taking over Danny’s space. However, one Danny’s employee says that rumor has been flying around “ever since they took over Nikki’s.” No one has any proof that it is true. What is common knowledge, and is written in on open letter on Danny’s Facebook page, is the landlord has jacked up the rent.

However, it isn’t fair to simply blame the landlord. Other factors had Samakow reassessing the future. Increases in food, labor, insurance, security costs, were all adding to the burden of doing business. Samakow wrote. “…at a certain point, it was no longer viable to remain open.”

It’s a typical Venice tale told by so many Venice stalwarts who have closed their doors over the past couple of years.

Venice Snoop worries newcomers aren’t giving enough back to the community. His fear is they are fair-weather friends. “Don’t come while it’s good and bail when it’s bad, otherwise, one day we’re going to wake up and we’re not going to be Venice anymore,” he says.

Megan Griffin was a bartender at Danny’s. She had joined fellow bartenders, Marc Iannarino, and Lucas Pera to come say “goodbye.” The three of them sit at the bar writing messages in a notebook that will be a gift to Danny’s Manager Ravi. Griffin says the closure is “bittersweet.” However, she is optimistic, “I can’t wait to see where the group of Danny’s people goes to next. Those places are where the next great bars will be.”

In the notebook, one bar manager, Kid Venice, has written that Danny’s was a family. “A dysfunctional family for sure, but a family is a family.”

It is evident the family extends beyond the bar & restaurant and stretches out way past Windward Avenue. With the crew from the Sidewalk Café, Hotel Erwin, and Townhouse all coming to pay respect.  Word has it that all the neighboring bartenders would sneak into each other’s bars for a drink during their shifts. “The whole street had a great little community,” says one past employee.

Iannarino says working at Danny’s “wasn’t just a job it was a lifestyle. We all made lifetime friends.”

Kitchen Manager Eduardo Posada, got his break working a Danny’s. “I grew up in this place.  I served my first dish here.”  Danny Samakow is the bar and restaurant’s namesake, and owner. He winds his way through the crowd, face beaming, “I feel fabulous!” He says he has spent the day hearing stories from people like Posada and he is overwhelmed by the “many people who have been changed by the place. But you don’t live for that you live for every day over the past ten years. The entire street has changed so much since we started. The sign wasn’t even here,” he says.t

Samakow was part of the Venice Sign Restoration Project. In 2007 the group hung a modern day replica of the Venice sign that Abbot Kinney originally installed in 1905. The Venice Chamber of Commerce calls the new sign, “a defining symbol of Venice, past and present.”

While Samakow has a passion for honoring the history of Venice, he’s also ready to embrace the future.

On the walls hang relics of the past. Old photographs, bathing suits from a previous century, old skateboards, and surfboards. Hanging above the east side bar is a museum-grade gondola. “There is so much beautiful history here. It will be preserved,” says Samakow, hinting that something exciting may be in store for the treasures on Danny’s walls.

Bill is another of Danny’s regulars. He’s been coming for ten years. He says he hopes whatever comes next is even better. “I’m not as pessimistic as most about Venice. Things will always change.”

Whatever the future holds, Venice Snoop says he’s “not going to give up on Venice, this is our home. A place for misfits, where nobody judges.”

Maybe then, Venice can hold on to the hope that in the end, the sun will shine after the rain.