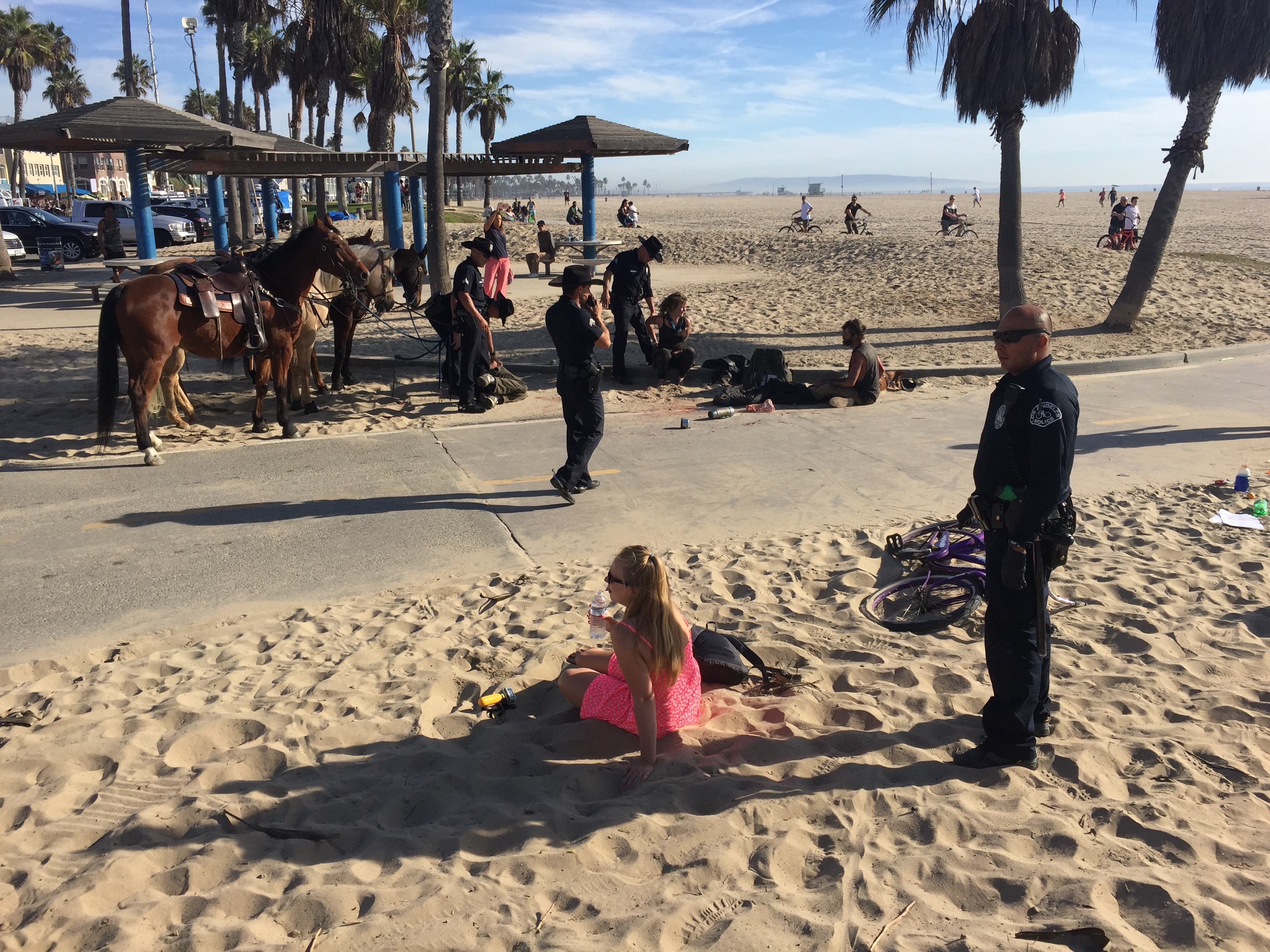 An officer from LAPD Metropolitan Division shot a dog on Venice Beach.

According to Watch Commander Scott Stevens at Pacific Division station, the dog had attacked an officer from the mounted unit and had latched on to the officer’s arm before being shot.

Bad went to worse when the stray bullet hit a passer-by, the “officer fired, the bullet went through the dog and hit a female on a bike,” said Stevens.

Paramedics were called to treat the young woman who had been riding her bicycle along the bike path that runs parallel to Ocean Front Walk.

The woman, a tourist visiting from the United Kingdom, had a bleeding foot and was crying. However, one officer told Yo! Venice she had been very understanding, even expressing concern for the officer, who she had seen attacked by the dog.

The shooting took place only feet away from where, just that morning, a county truck ran over a homeless man sleeping in the sand.

With news crews already on the scene, hundreds of police flooded to the beach shutting off the entire parking lot at Ocean Front Walk and Rose Avenue to conduct a follow-up investigation.

The dog belonged to a transient traveler who was planning to leave the next day for New Orleans with a group of his friends. The group had been camping in Venice for three days. Their plan was to ride freight trains across the country to Louisiana. In the meantime, they had planned to relax and soak up the sun at the beach. The three dogs in the group were enjoying chasing pigeons.

About 20 minutes before two mounted officers from LAPD Metro Division rode by in a routine check, Yo! Venice had been speaking to the young transients. One of the group pulled out a syringe and asked a friend to inject him. The friend had refused and told him to go to the nearby public toilets.

The dog’s owner had expressed concern that his pit bull did not like horses and said he hoped the mounted police didn’t come over.  In what was to become an ominous foreshadowing, he told Yo! Venice he was not looking forward to going to New Orleans. Saying someone shot his dog the last time he had been there. He even played “bang, bang” with his chestnut pit bull, having her roll over and show the faded entrance and exit scars on her torso.

The dog had survived the New Orleans shooting. Sadly, she was not so lucky this time in Venice as she had been in Louisiana.