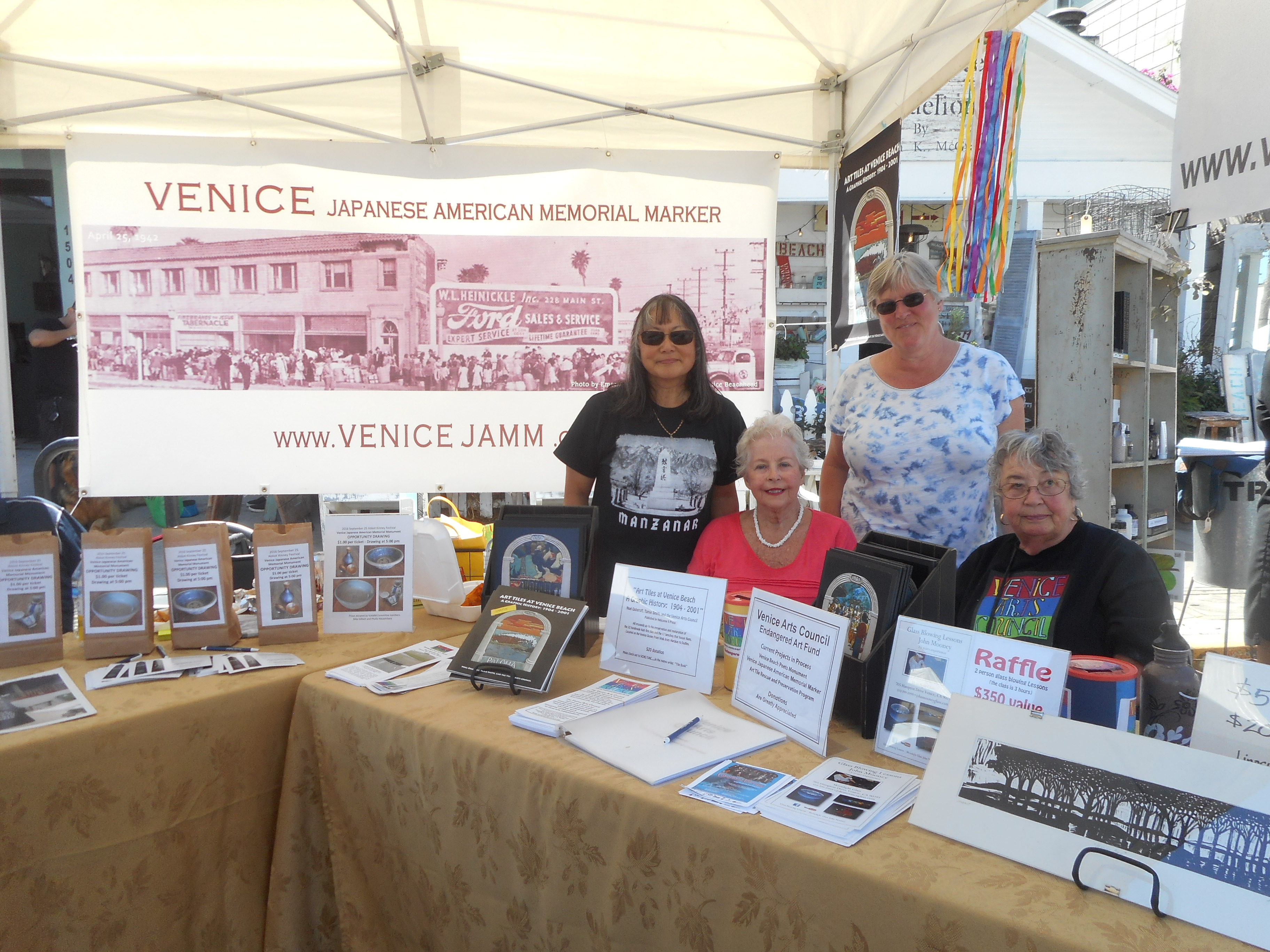 The Venice Japanese American Memorial Monument Committee has been awarded $1,700.00 by the 2016 Abbot Kinney Festival Association Community Grants Program. The award will “fund the development, layout, printing, advertisement, distribution, and website maintenance of the 5th, 8th, 11th, and 12th grade teachers’ curricula.”  The curricula will address the forced removal and incarceration of persons of Japanese ancestry in general, and the Venice Japanese American Memorial Monument in particular. The VJAMM Committee intends that the VJAMM will inspire and engage students to know and appreciate their Constitutional rights, and to celebrate and respect their diversity. VJAMM Committee members Phyllis Hayashibara, Alice Stek, and Suzanne Thompson accepted the award on the Andalusia stage at the 2016 Abbot Kinney Festival from Jonathan Zeichner. The award includes a free Community Grant Recipient Booth at the 2017 Abbot Kinney Festival.

VJAMM Committee member Phyllis Hayashibara will develop the curricula to incorporate the photo, text, quotes, and map on the Venice Japanese American Memorial Monument. She retired from teaching World and U.S. History at Venice High School in the Los Angeles Unified School District in 2011, and has recruited the input of current classroom teachers at the elementary, middle, and senior high school levels to review the lesson plans and make recommendations for practical implementation. Their experiences with the California Standards for History-Social Science and English Language Arts, and with recent curriculum adjustments based on the Common Core Standards, will help mold the curricula into historically and personally meaningful lessons for students at the respective grade levels.

“The VJAMM Committee has worked so hard to make the monument a reality,” said Hayashibara. “But the monument must also inspire the next generation to heed the historical and Constitutional lessons of the forced removal and incarceration of persons of Japanese ancestry during World War II. We must continue to educate our children to this historical injustice so that they have the knowledge to fight prejudice, discrimination, and violations of Constitutional rights in their own life times.”

In August, 2016 David Williams of the Williams Monument Company in Arvin, California, sent photos of the VJAMM obelisk being shaped, polished, crated, and loaded into a shipping container in India. Williams estimated the VJAMM will arrive in the Bay Area the first week of October. The VJAMM will then be shipped to Arvin, where Certified Memorialist David Williams will personally engrave all four sides of the VJAMM with historical text, quotes from former Manzanar internees, acknowledgement of major donors ($5,000 and above), and a map from Venice to Manzanar. The complete text, quotes, acknowledgement and a full list of donors can be found on www.venicejamm.org.

The VJAMM Committee plans a dedication ceremony of the VJAMM in the last week of April 2017, including their sixth annual fundraiser at Hama Sushi in Venice. April, 2017 will mark the 75th anniversary of the beginning of the Japanese American evacuation from Washington, Oregon, and California, and their internment in ten American concentration camps operated by the War Relocation Authority, including the camp at Manzanar in Inyo County. The 48th Annual Manzanar Pilgrimage will take place the last Saturday in April 2017 on the 29th.