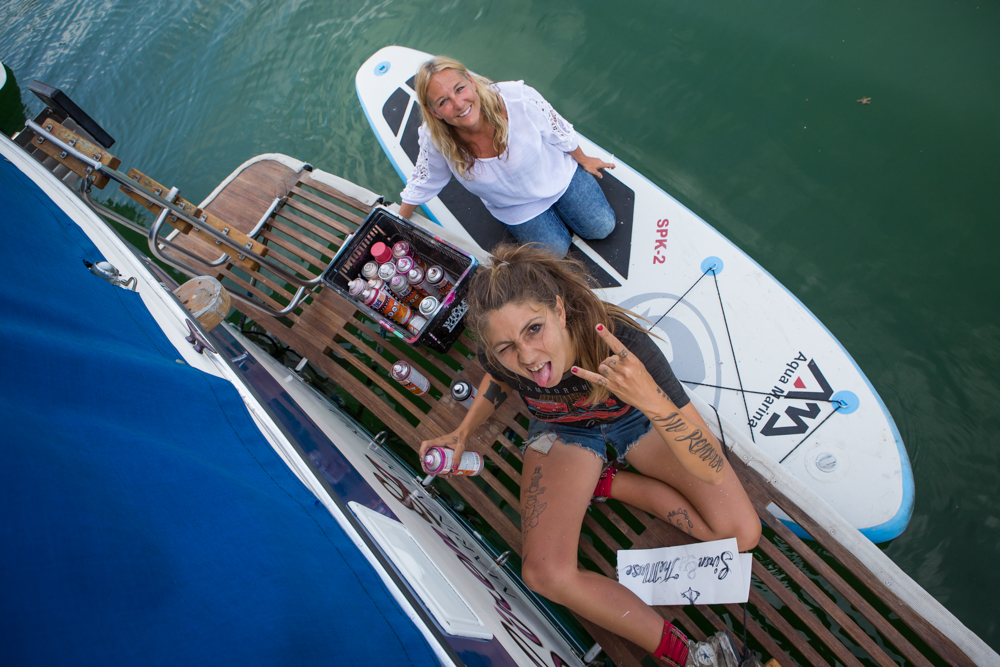 There’s a mermaid in the Marina. Her name is Yvonne Clark.

She sits aboard her boat in Marina del Rey sipping coffee from a mug that reads, “Work like a Captain, Play Like a Pirate.” Beside her, Sexy McJesus, her two-legged rescue dog wiggles closer for a pat. Two years ago Clark says she was looking for something different. Fresh out of the Navy, her son Nick and his then girlfriend had inherited a small sailboat.

“They said they were going to keep it so that I could live on it, this teeny sail boat, in my old age. I looked at this sailboat and I said, ‘No. that’s not going to work.’ But that got me thinking. I had just come out of a relationship and was looking for a new place. I’d lived in Venice, and the Valley, so I thought why not try something different,” says Clark.

Looking into the move Clark soon discovered it can be tricky getting legal live aboard status in Marina del Rey. “There’s not that many live abroad spots available,” says Clark. There’s also no waiting list. Lucky for Clarke the man who owned the boat she had decided to buy was a live aboard and she was “able to parlay that all into the boat purchase.” She now says she’d “find it very hard to live anywhere else. Unless it’s very unique.”

An afternoon in Clark’s backyard requires firing up the dinghy or jumping on a paddle board. Her neighbors are sea lions and fellow live-aboard boaters.

“People have a perception that it’s just a bunch of old alcoholic sailors, grumpy, hiding out in their old decrepit boats and that it’s just kind of like a trailer park sort of situation and I think that, hopefully, that perception is changing. The people living here and coming here has changed. I’ve seen it just in a year and a half. Younger people who are just really enjoying everything about the Marina and bringing, kind of like a new life, a new fresh, young feel to it. The way boating is supposed to be. Fun,” she says.

Clark grew up in the Valley and would regularly travel down to Venice to surf. I keep getting drawn back to the ocean…I don’t think I can get any closer than this,” she says.

While her Grandfather did have a sailboat in the Marina when she was younger she says she didn’t have any real experience with boats before she moved aboard her own. “Everyone was running bets as to how long I’d stay. Some bet four months, some six,” says Clark. They all lost their bets but no one seems to mind.

Part-time neighbor Chef David does not live aboard his boat, but when he’s spending the day on his sailboat he’ll paddle across to Clark for a cup of coffee. It was David who gave Clark the idea of using Venice artist Jules Muck to paint the name on Clark’s boat.

Rejecting the notion that a name change brings a boat bad luck, Clarke had chosen the moniker Siren & the Muse for her floating home. While the name was easy, it took almost 18 months for Clark to decide how she would put the new name on her boat.

The painting day turned into a party. People came from Venice to the Valley to watch Muck work. “It turned out so beautiful, so amazing, so perfect,” says Clark. She likens the experience to getting a tattoo. You get one, you want more. “Now I’m kind of addicted. I want to put an octopus on the side, going around. A starfish…” she says.

The summer breeze carries a Marina chorus of slapping ropes and water lapping against the hulls of boats. “This is what protesting looks like. I’m protesting the American Dream. This is the American Dream,” says Clarke waving her fingers as a peace sign, as the wind catches her sun-kissed hair. She really does look like a mermaid.