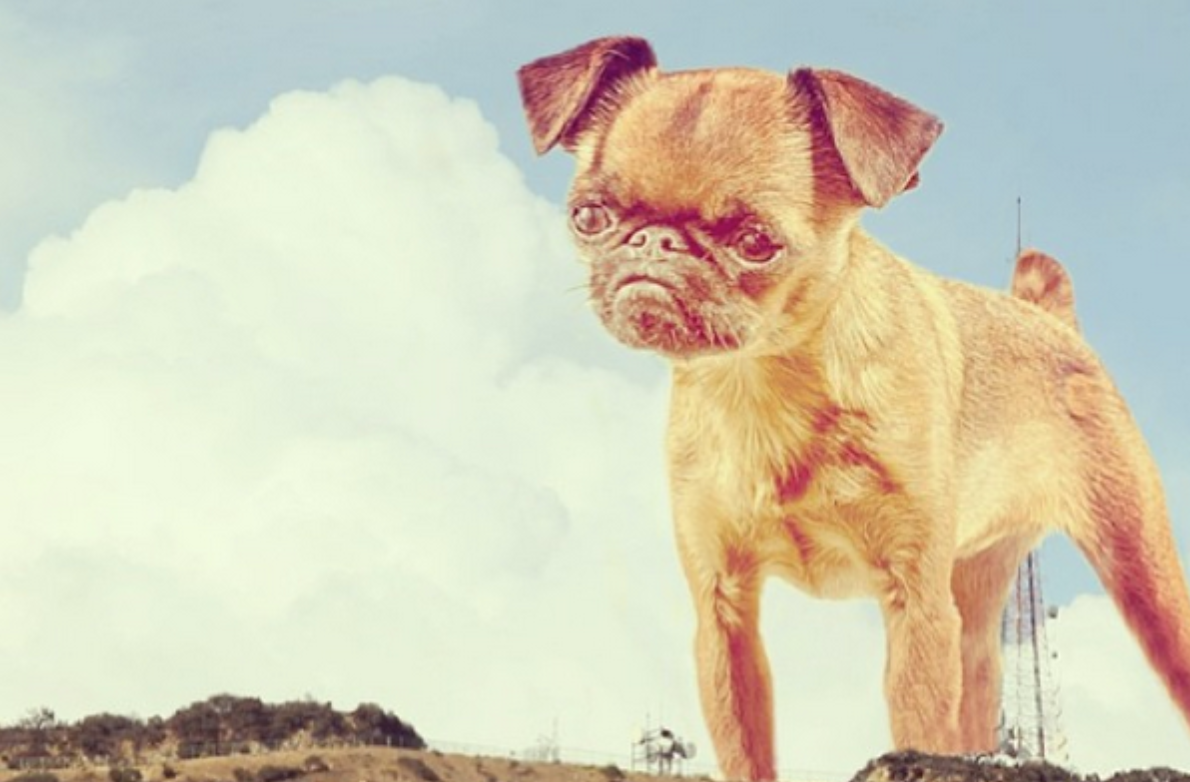 A woman locked in a cross-border dispute with her former flame over possession of a small dog won a round in court today when a judge tentatively ruled that she can move forward with a stalking allegation that is part of a countersuit.

He is vying with Wells for permanent custody of  “Berryhill Thinkingmans Crumpet,” the name given the smooth-coated Brussels Griffon that Wallace bought in July 2011 for $1,237 from a well-known Canadian breeder. Wallace posted the female pooch’s face on Instagram, and the canine has made numerous other appearances on social media including this story on The Chive.

Wallace started the litigation by suing Wells, of Los Angeles, in June
2015. He says Wells paid him $650 for her interest in the pet, but later
relinquished her ownership claim. The Brussels Griffon breed, also known as
Griffon Bruxellois, is a stock of toy dog named for Brussels, Belgium.

Wallace’s suit alleges conversion, deceit and intentional infliction of
emotional distress. He’s is alleging about $300,000 in damages and wants a
court declaration that Wells must return Crumpet to him.

Wells countersued in July 2015, alleging assault, battery, domestic
violence, intentional infliction of emotional distress and stalking. According
to the countersuit, Wallace and another man grabbed Crumpet from Wells’ grasp
in May 2015 in Sherman Oaks. She alleges Wallace twisted her arms and wrists
and banged her body against a wall, leaving her with bruises and scratches, and
also shouted profanities at her before he and the other man left with the dog.

Less than two weeks later, Wells obtained a stay-away order against
Wallace, who was ordered to return the dog to her, according to her suit. The
dog has remained with her ever since.

Wells’ countersuit alleges Wallace created seven personalities on social
media to “threaten and intimidate Ms. Wells, as well as her family, friends
and co-workers.” In a Facebook message, Wallace wrote, “It’s as if you think you can do anything you want without any repercussions … Please know one thing … there are consequences …”

Wallace’s attorney, Brett Berman, argued in his court papers that someone who claims he or she was a stalking victim must show at least one demand made to the assailant to stop. But in her tentative ruling, Beaudet wrote that Wallace had “engaged in a pattern of conduct with the purpose to follow, alarm, surveillance and harass Ms. Wells. As a result Ms. Wells reasonably feared for her safety
and suffered substantial fear, anxiety and emotional torment. The Facebook message is only one example of a credible threat with intent to place Ms. Wells in reasonable fear for her safety and made with reckless disregard.”

The judge also said Wells believed it was “impracticable and unsafe”
for her to demand that Wallace stop his alleged stalking.

Wallace and Wells dated from August 2008 until May 2013 and lived
together in Toronto, according to his suit. In April 2012, Wells said she was
temporarily moving to Los Angeles for five months, but would return, while
Crumpet remained in Toronto with Wallace, his court papers say.

But Wells did not return, and in May 2013 told Wallace that she would
remain in Los Angeles, but missed Crumpet and asked that she be allowed to have
the pet for awhile in the Southland, according to his suit. Wallace says he declined the visitation request but later that year agreed to Wells’ request that Crumpet spend time with her for two months while he would be traveling. The parties agreed the dog could stay with Wells until February 2014, then be returned to Wallace in Toronto, but that never happened, according to his lawsuit.