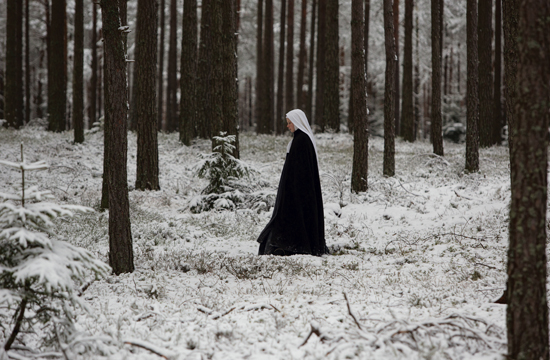 “The Innocents,” written by Sabrine B. Karine, Alice Vial, and Pascal Bonitzer, is powerfully directed by Anne Fontaine who elicited restrained, but intense performances from each member of her talented ensemble. In Polish and French with English subtitles, this is a tender story, based on actual events, and is set in Warsaw, December 1945.

In the aftermath of World War II, Mathilde, a young French Red Cross doctor, sensitively played by Lou de Laâge, is treating a group of French soldiers. Some were either wounded in battle while others are survivors of German prison camps. Out of the snow-covered landscape Irena, a Benedictine nun, skillfully played by Joanna Kulig, appears at the clinic and asks Mathilde for help. At first the nun is secretive about what the problem is but alludes to death being imminent. At first Mathilde refuses to help, encouraging the nun to seek assistance from the Polish Red Cross. But then, she sees the desperate nun kneeling in the snow in prayer position and reluctantly grabs her medical bag and accompanies her back to the convent.

Once Mathilde arrives at the convent, she discovers that one of the nuns is in what appears to be the final stages of labor, but is in unbearable pain. It becomes clear that the young nun’s baby is in a breech position and surgery must be performed immediately to save both the mother and the baby. As the story unfolds, the stern Mother Abbess, played to perfection by Agata Kulesza, reveals an unspeakable act of cruelty. It seems that Russian soldiers stormed the convent and raped the nuns over and over again resulting in multiple pregnan

cies. Despite this humiliation and violation of their vows of chastity, the Mother Abbess insists that the surviving nuns, pregnant or not, adhere to the strict rituals of their everyday harsh life in the convent. Meals are eaten quietly and morning and evening prayers are sung in haunting harmony.

As time goes on, the nuns turn more and more to Mathilde for help. The doctor begins to neglect her duties at the clinic and is reprimanded by her commander for being absent. As if to telegraph what the nuns experienced, Mathilde suffers a bru- tal attack on her way back to her quarters one night, making her bond with the nuns even stronger. When Russian soldiers once again invade the convent, it looked as if the nightmare these nuns suffered was going to be replayed but the doctor’s quick thinking saved them from another mass attack.

Life at the French clinic is also portrayed, with an interesting relationship developing between Mathilde and another doctor who she assists during surgery. This character is well played by Vincent Macaigne who eventually gets caught up in the plight of the nuns.

“The Innocents” is exquisitely shot by director of photography Caroline Champetier, with each frame a beautiful still of the rugged terrain or delicately capturing the frugal life within the convent. This is a compelling film, which will touch myriad emotions. It will make you smile. It will make you laugh. It will bring an occasional lump in your throat. However, you will be privileged to have been given a tiny peek at the cloistered life these nuns lived and how they were able to keep their beliefs and maintain their dignity despite the horrendous acts of violence perpetrated against them. Incidentally, lest you worry that this film is a “downer,” the writers have sprinkled in humor and in keeping with the true story, you won’t be disappointed with the dénouement.