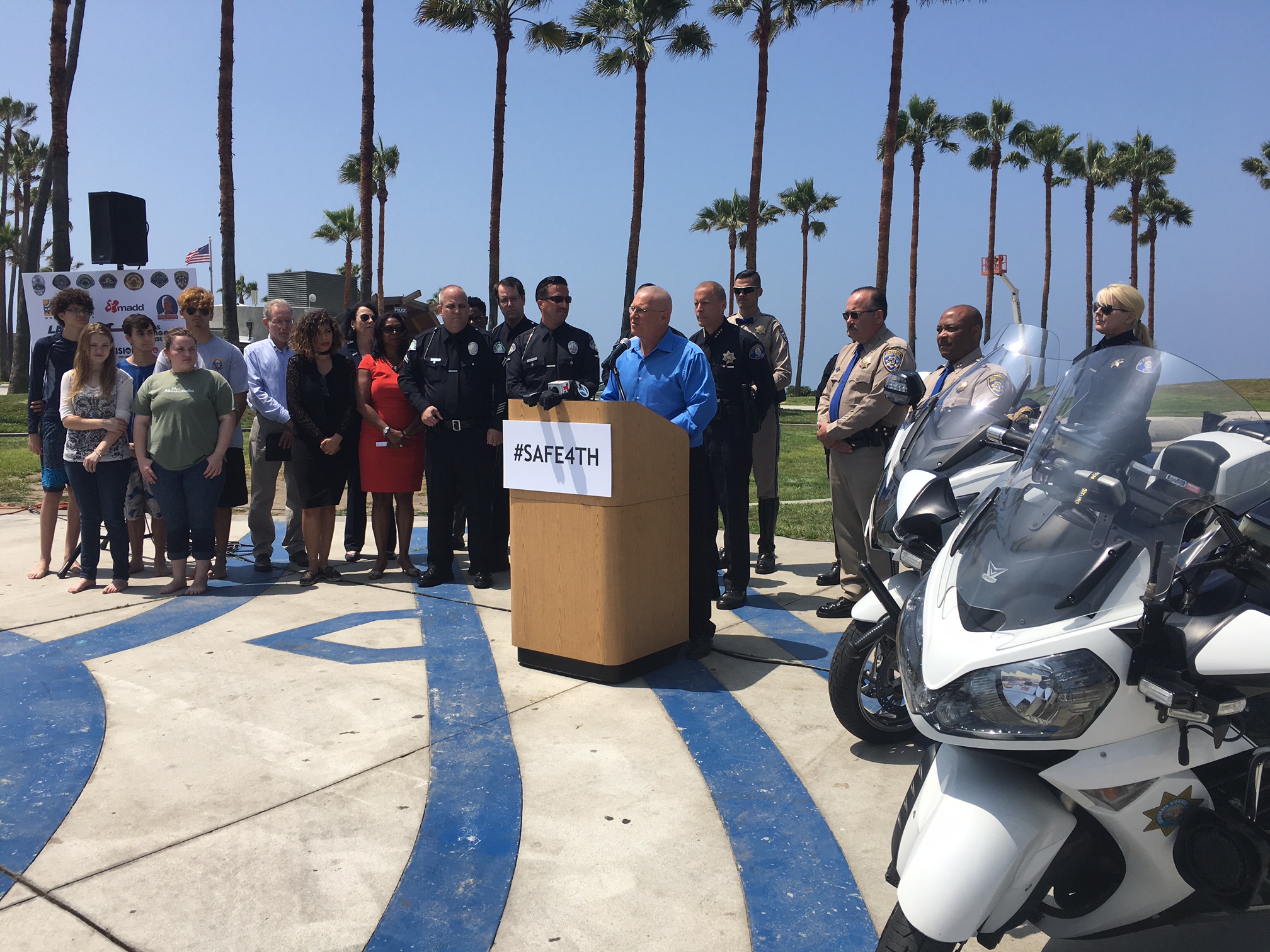 The mangled remains of a car that had wrapped around a tree on Ocean Park Blvd sat encased on a trailer that had been wheeled onto the park at the end of Windward Ave on Ocean Front Walk in Venice.

The driver had been killed. He had been driving home after drinking with friends. An autopsy had revealed a blood alcohol reading of 0.08. He hadn’t killed anyone else but he left behind grief stricken friends and family.

The display was set as a timely reminder as neighbors prepare for holiday weekend celebrations.  In 2014 the National Highway Traffic Safety Administration found that 41% of traffic deaths over the July 4th holiday period were due to drunk driving.

Representing Mothers Against Drunk Driving (MAAD), the organization that coined the term ‘Designated Driver’, Jocelyn Garrity recalled the day her mother was killed by a drunk driver.

“I remember falling and screaming and yelling at every single person I saw staring at me in that emergency room where I was quickly taken to where my beautiful and lifeless mother lay, after I’d seen her so vibrant and full of energy just that morning. That night was the worst night of my life,” says Garrity.

The morning after the accident Garrity says she remembers that she and her father had had to tell her younger brothers, who were 6 and 11 at the time, “that our Mom was gone forever. That one 18 year old girl had made one bad decision and that we were going to have to suffer the consequences of that decision for the rest of our lives.”

Taking to the podium Councilmember Mike Bonin began, “We’re about to celebrate 4th of July, Independence Day, and that big holiday means a lot of different things to different people.” Launching an initiative with MAAD, Recording Artists Against Drunk Driving (RADD), the LA County DUI Task Force, and Uber to increase awareness about the importance of making a plan and getting home safely this holiday weekend.

“We’ve all heard a lot of statistics around the dangers drinking and driving but the one that  sticks out to me the most is that 100% of all drunk driving crashes are preventable. When people have access to reliable, affordable transportation options, like Uber, they’re empowered to make the right choice to not drink and drive,” says Christopher Ballard who is the General Manager in Southern California at Uber.

The ride-sharing app will donate $1 to MAAD for each ride taken in Los Angeles County between July 1 and July 4 that uses the promotional code SAFE4TH.

“Study after study has shown that the entrance of Uber has had a measurable impact on the number of drunk driving crashes right here in California. What’s also important is the fact that people’s attitudes are changing and according to a survey released this week,   90% of riders say that Uber helps reduce drinking and driving and 80% says Uber has helped them avoid drinking and driving,” says Ballard.

City of Glendora Police Chief Timothy Staad was in Venice representing the Los Angeles County DUI Task Force. He urged that everyone consider their options when celebrating this weekend, “if you’re going to drink, drink responsibly, and please don’t get behind the wheel of a car and drive.”

Garrity says while many celebrate, she will be worrying, “ all I want to do with the rest of my life is make sure that no one else has to ever go through what me and my brothers and so many others have gone through. Weekends like 4th of July are weekends where everyone goes out and has so much fun but we are very, very much so stressing that you think ahead about what you are doing this weekend. That  you have a designated driver or use Uber, because you don’t want to do to anyone what my family has had to go though. You want to get home safely this weekend.”