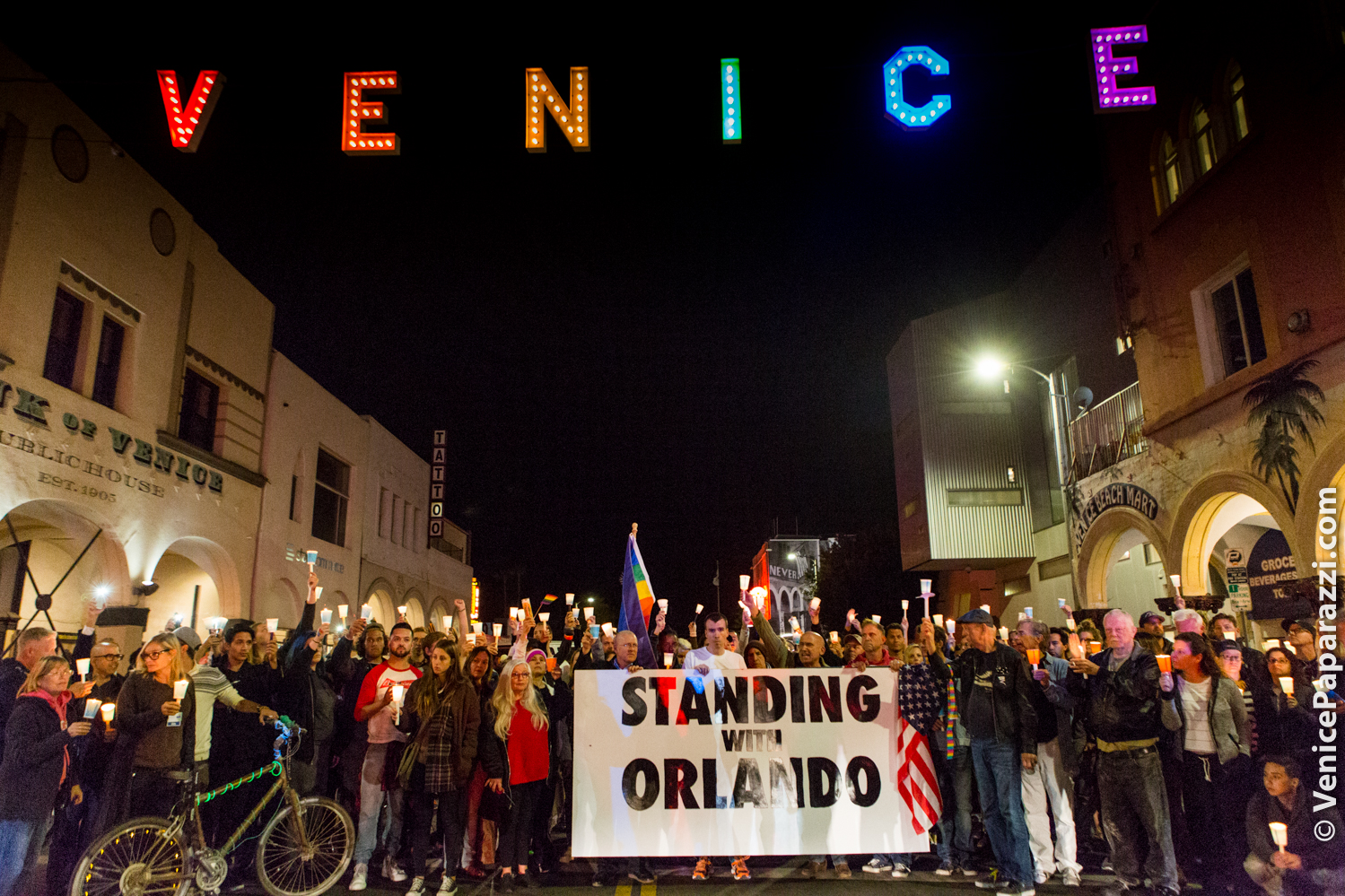 Hundreds of neighbors gathered under the Venice Sign at the Orlando Strong Candlelight Vigil in Venice on June 13. Just one day after the tragic mass shooting inside Pulse night club in Orlando.

Gathering to pay tribute to those who died and to pray for those wounded, many grieved for those lost after 29 year old Omar Mateen killed 49 people during a June 12 rampage inside the club.

The vigil mirrored similar events held on the night all around the country.

Venice Local Grant Turck, who was part of a small group that arranged Venice Pride this year, read a list of the names of the those lost in the massacre. Meanwhile the crowd stood somber, silent tears glistening in the candlelight.

“What happened in Orlando, I still haven’t had the ability to comprehend it,” said Councilmember Mike Bonin as he addressed the crowd. “I still haven’t wrapped my mind around it. Last week at the city council meeting we were celebrating LGBT Pride and this year, because we had celebrated so many successes over the past couple of years; marriage equality, so many states making progress… We learned yesterday that the battle for LGBT equality is far from over.”

Bonin said that on the day of the Pulse shooting he started a meeting with a moment of silence, “I thought at the time it was an act of respect. I actually think today it is not the most respectful way to respond…I think the most respectful way to respond to what happened yesterday is loudly and angrily. Is pissed-off. Is furious. Do what the old labor standard says and ‘Don’t mourn, but organize.’

The crowd seemed to agree, individuals calling out, “Yes.” Emotions running raw, Bonin did not hold back in his speech.

Bonin rallied the group to take action and travel to Washington and other state capitals to lobby for legislation saying, “we got a lot of blessings here in Los Angeles. We need to be making some trips.”

Getting up to speak before the crowd, Daniel Samakow co-owner of the Venice bars and restaurants Danny’s, Canal Club, and James’ Beach said, “I’m so grateful to be in a community like this that honors the feelings of diversity that this community has stood for for hundreds of years.”

Many shared moving photos of the night on social using #orlandostrong and #loveislove to show that while hate may hate love, love is stronger.

From now through June 30th the community, whether lesbian, gay, bisexual, transgender, queer, or straight is invited to participate in the Kiss the One You Love campaign. To be part of the movement simply kiss someone you love under the Venice Sign and share your photo using #venicepridekiss.