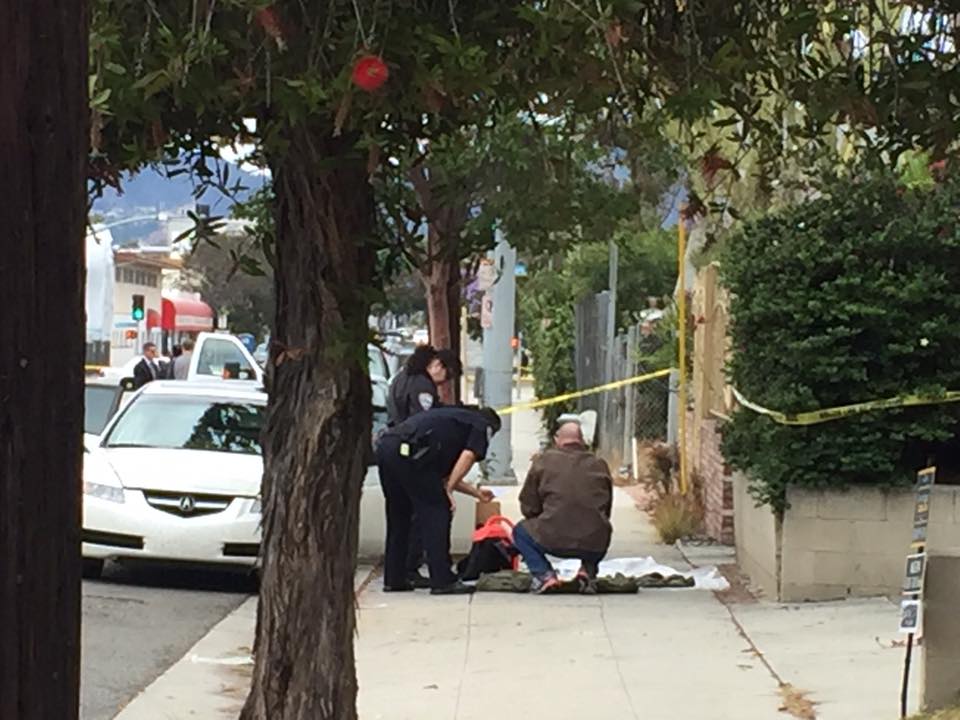 A car with explosives and a man in camouflage and
armed with a gun were seized in Santa Monica today, hours after a horrific mass killing in Florida, and hours before 400,000 people were expected at a street festival in West Hollywood.

FBI spokeswoman Laura Eimiller told City News Service “we are assisting the Santa Monica Police Department with the arrest of an individual,” but would not supply any more details.

Unnamed police officials told the Los Angeles Times there was white
explosive powder in the car.

A City News Service editor described a white Acura sedan, parked on the wrong side of 11th Street south of Olympic Boulevard. Its doors were open, and it was surrounded by police lines. Next to the car was a gas can, some camouflage gear and a backpack. Reporters could spot Indiana license plates and it was covered with insect debris, as if it had been recently driven a great distance cross-country.

There was no bomb squad present, and police told the Los Angeles Times the person arrested was in town for the Pride Festival, and had a security guard’s uniform. Sheriff’s deputies said a man “was detained in the city of Santa Monica this morning, who was in possession of weapons and other dangerous material.

“Any possible nexus with this individual and the Pride event in West
Hollywood is being investigated by the Federal Bureau of Investigation,” said the sheriff’s department, which is the city police agency for West Hollywood.

Santa Monica police would not officially confirm the incident, or link
it to the Pride Festival underway this weekend at the center of gay, lesbian and transgender life in Southern California.

The Los Angeles Times reports that Santa Monica police had responded to a report of a prowler on 17th Street south of Olympic Boulevard in Santa Monica, 7 miles away from the Pride Day festival. They encountered a man dressed in camouflage who said he was waiting for a friend. His car, with Indiana plates, was searched, and material described as pipe bomb materials was seized.

“He was totally unrelated” to the Florida attack, said Los Angeles
Mayor Eric Garcetti. Sheriff’s deputies in West Hollywood said the man did not have any apparent connection with the Florida mass murder. Fifty people were killed and 53 injured in the attack on a gay nightclub in Orlando, an attack carried out by an apparent ISIS terrorist.

Reporter Jeff Nguyen has more updates on his facebook