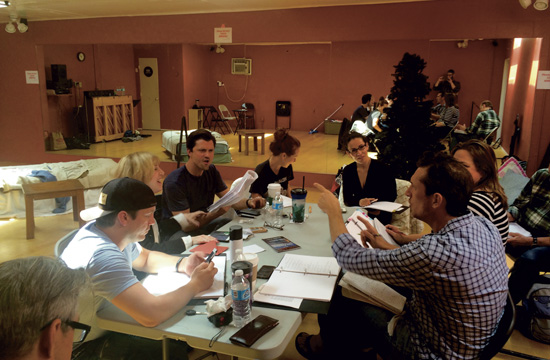 Joanne Baron has been acting since she was a child. “I was in a talent show when I was 8, and I’ve been in love with it ever since,” said Baron.

Baron, a five time Dramalogue winner, and her fellow cast mates will star in the west coast premiere of Blood From a Stone.

“I saw the original off-Broadway production with Ethan Hawke and fell in love with the play,” Baron said. “There’s not a bad role in this show.” The original production saw Hawke win an Obie award for his performance.

The play, which opens this week, will be showing at the Electric Lodge in Venice.

After spending several years in New York City acting and studying, Baron relocated to Los Angeles and opened up the Joanne Baron/D.W. Brown studio with her husband, over 40 years ago. The studio, located in Santa Monica, focuses on the Sanford Meisner acting technique, and has called actors like Jeff Goldblum, Halle Berry, Robin Wright, and Patrick Dempsey, students at one time.

Two recent students, Chad Brannon and Ryan Lahetta will costar with Baron in the upcoming production of “Blood From a Stone.” The play is a tense family drama and deals with the dynamics of a family falling apart from years of mental and physical abuse.

The cast has spent the recent weeks rehearsing the tense scenes included in the play. “There’s a lot of slapping,” Baron said. “This cast is very talented”

Baron said she is “fascinated” by her character Margaret, the matriarch of the family. “She doesn’t like her husband, but she won’t divorce him,” Baron said. “She comes from the mentality of you stay with a person when you marry them, even though they live on different floors.”

The performance is “as local as it gets,” Baron said. It is being performed in Venice, with actors from the studio in Santa Monica and Baron has been a long time resident of Brentwood.

In addition to the acting studio and the play, Baron currently has a show in development. Baron describes the comedy show as “total improv” and said she and her husband (who she filmed it with) are looking for the right place to launch it.

“I’m always working. If I’m not acting, I’m working at the studio,” Baron said. “Acting is the love of my life.”

WHAT: Blood From A Stone.

By Melanie Camp May 19, 2016
Tags: featured in Opinion
Related Posts