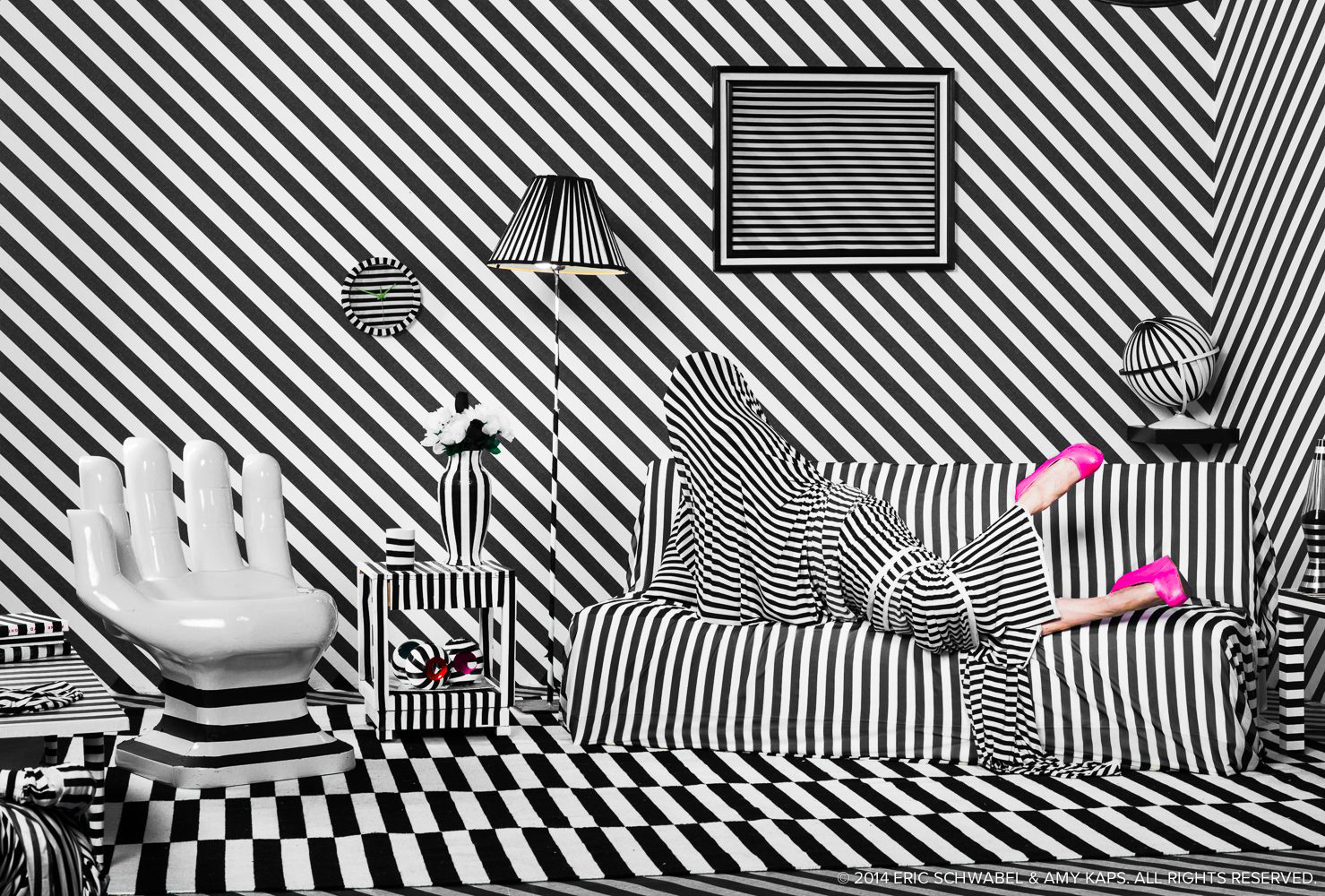 Stripes – they’re not just for racing and horrible, pre-pubescent Frankie Muniz movies anymore. Amy Kaps is a photographer and performance artist, earning her stripes as she breaks into new territory with every successive piece she reveals. However, her magnum opus might be her work with black and white stripes, also known as Victus Versus, a loose translation of “Living Lines” in Latin.

Kaps has been a performance artist since the very beginning. Born in New Jersey in 1959 and starting with dance classes at the age of 3, Kaps eventually grew to study ballet and modern dance in college, as well as theatre, despite being a psychology major and graduating in 1981. She then moved to New York after college, then Germany in 1982, and eventually settling in Venice, California in late 1995. Kaps’ parents took their daughter to New York City often growing up, which allowed her to become immersed in the culture of museums and plays that dotted the city.

A performance artist is a very broad term, technically encompassing any endeavor that people are supposed to witness. Kaps’ piece of covering herself with black and white striped cloth and moving slowly throughout out a room of the same color is a show for the human eyes, but is also captured by a photographer for purchase as well as posterity.

“I wanted to find a way that I could give people something they could take home with them, as well as monetize my work. Performance art is temporal – if you’re not there, and you missed it, then you missed it,” Kaps said of Victus Versus.

Working with photographer Eric Schwabel, she sets up a “striped world” in whatever room is available to her, using fabric, as it is inexpensive as well as wearable and thus one giant carbon copy, in order to act out her piece. “There’s a fluidity with fabric, it’s not just a two dimensional surface,” she said.

A lot of her work revolves around perception, and loves to play with peoples’ eyes via the use of perspective and often times the human body.

Kaps’ view on performance art differs from the dictionary definition, in that she believes that it is different from theater, despite looking somewhat similar. While she has done pieces in theaters and playhouses before, Victus Versus seems to be a horse of a different color.

“This piece is sculptural, it’s very abstract,” she explained. “It’s certainly a line through all of my work, but there are other pieces that I have done where it’s theatrical. It requires lighting, projections, sound, or even speech and singing. Maybe that’s theater; but being that I come from more of a performance art background, I prefer to stick to my roots.”

Amy’s new exhibit, Continental Drift, has its opening reception this Thursday, Sept. 17, at 5 pm, going for four and a half hours at 8687 Melrose Ave, Space B226, in West Hollywood. The exhibit itself lasts until October 30.

“Each of these works are abstractionists, or at least abstract-adjacent; yet each of them maintains a special relationship with the figure and an elemental experience of place,” she said. “Specifically, all of these artists are [or were] coastal dwellers living and working right at the point where the landmass of the country begins and ends – geographically, culturally, emotionally.”

The exhibit will also be showing in the Orange County Center for Contemporary Art afterward under the name “Fashionita.”