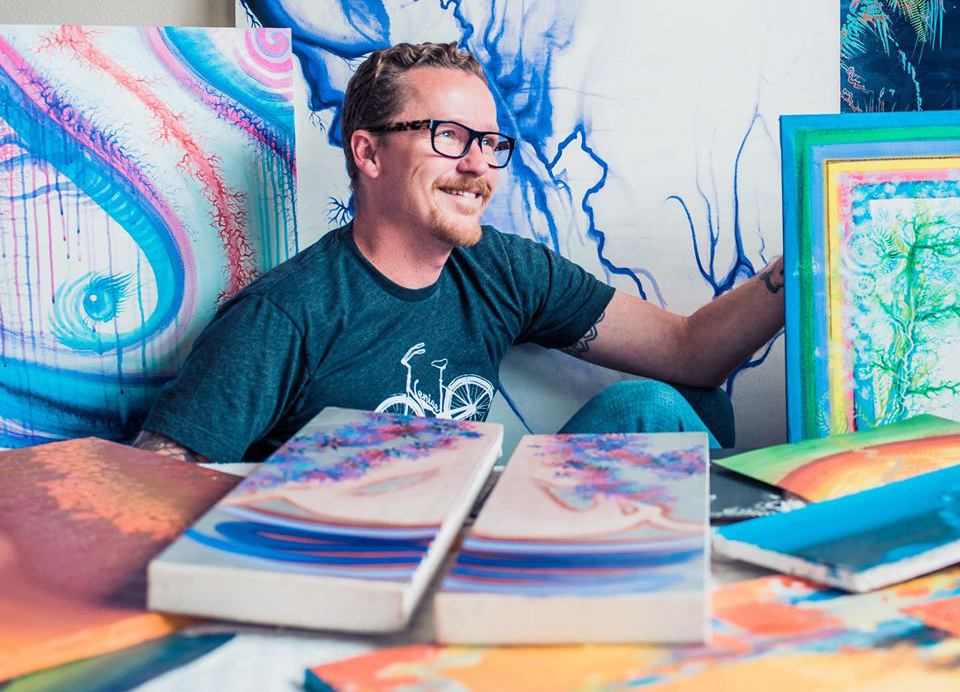 Erik Thorkildson is one of the many talented local artists involved in the Venice Art Block, an artist-run collective. His works, primarily acrylic on canvas, are an exploration of the interplay of color and light, and bring back an aesthetic of the psychedelic era.

Yo! Venice talked to him recently.

So first, just tell me about yourself. How did you get into art and when did you start painting?

My commitment to art has been a lifelong thing. My mom was a painter and I grew up watching her paint canvasses and doing lots of great things. I’ve really been doing art since I was able — my parents have a painting on their wall from when I was two years old. I was born and raised in Reno, Nevada, then I moved to San Francisco to get my Bachelor’s degree in fine arts and practiced art and flourished and practiced a little more there. I relocated to Los Angeles and moved to Venice eventually, where I really found a sense of belonging and through that have met a lot of people and been a part of a great community that is very creative. Through all that I have found a home in Venice as an artist.

How did growing up with your mom as a painter inspire you as an artist?

I grew up in a family that always fostered my creativity as well. I spent summers tie dyeing shirts and my parents were always supportive. My younger sister and I would spend summers and time off from schools crafting things and making art, color was just a constant theme of my life.

Could you tell me what about Venice inspires/has inspired you so much?

Well I think it’s a little bit of the bohemian vibe that’s there. It’s very being near the ocean, it’s very aligned with a lot of ideology that I seem to share with people. Anywhere I go when I walk down the street I’m surrounded by creativity, from the signposts to the street art, everything. It’s such a great, colorful, creative place that’s very inspiring to me.

I was looking at some of your paintings online, and they were very cool. Do you have a specific favorite piece?

Gosh, that’s so hard to say! There’s a red one I’ve held onto for years, I’ve been offered a lot of money for it but I just have a sentimental attachment to it. It’s moved with me for years and years and years.

How did you get involved with the Venice Art Block?

Well I’m very good friends with Eric Schwabel, he’s a photographer, and he actually has a studio space right across from where I live in Venice. It’s a hub of studios so it’s like an artist commune out there, there are six or seven artists who live and work in that space and exhibit their work. So just because I was living in Venice and befriending my neighbors, especially Eric Schwabel, he invited me to take part in this committee they have, the Art Block Committee, so I joined up this year. It was a huge success for me, I sold about seven pieces and met a lot of great people in the community and had a great time.

Do you have any future plans for exhibitions or anything?

Yeah, as a result of the Art Block I made a couple connections and have an upcoming show in Eric [Schwabel’s] art space. He has a gallery called “Window” and I’m going to be doing a solo exhibit of around 12 of my works. The fall or early September is what we’re shooting for. Art Block happens twice a year so I will be participating in the second event this fall as well.