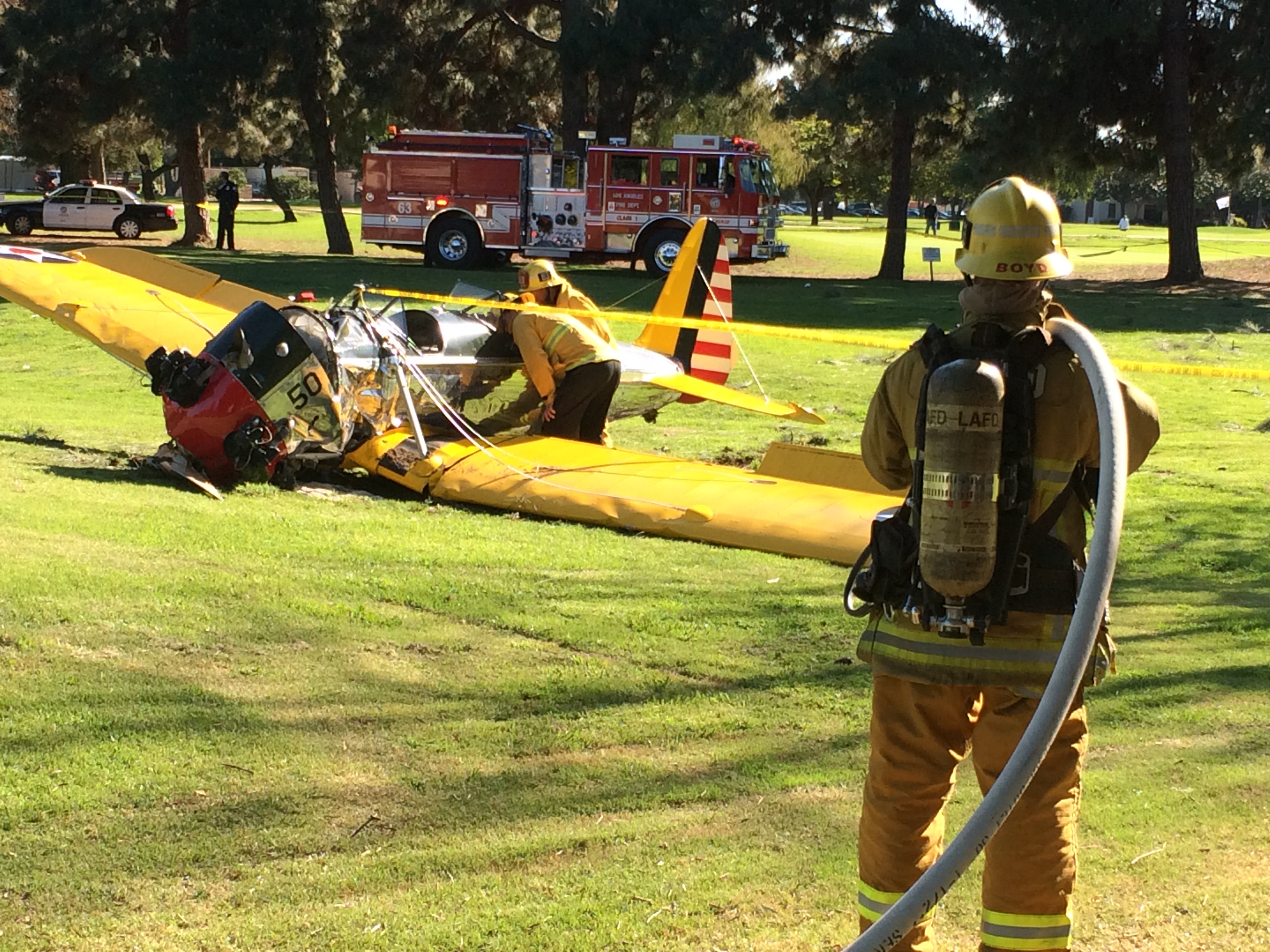 “Battered, but OK,” actor Harrison Ford was hospitalized today with injuries he suffered when the World War II-era single-engine plane he was piloting lost power and crashed on a Venice golf course shortly after takeoff from Santa Monica Airport.

The single-engine plane, identified by the National Transportation Safety Board as a Ryan Aeronautical ST3KR — an aircraft built in the 1930s and used to train military pilots from the United States and other countries — went down about 2:25 p.m. Thursday on a fairway at Penmar Golf Course at 1233 Rose Avenue, said Los Angeles Fire Department spokesman Erik Scott. Area residents said this was the second time in recent years that a plane crashed at Penmar, a 9-hole Los Angeles city course.

Scott said there was only one person aboard the plane. Authorities initially declined to identify the pilot, saying only it was a man in his 70s who was conscious and alert when he was treated by paramedics at the scene.

LAFD Assistant Chief Patrick Butler said the pilot was outside the plane when crews arrived and was taken to a hospital, having suffered “moderate” trauma.

“Normally, the outcomes are fatalities, so we are very thankful,” he said.

Ford’s publicist said in a statement quoted by the Los Angeles Times that the 72-year-old actor is banged up, but his injuries are not life- threatening and he’s expected to make a full recovery.

Ford’s son, Ben Ford, posted on his Twitter page that his father was “OK. Battered, but OK!”

“He is every bit the man you would think he is,” Ben Ford wrote. “He is an incredibly strong man. Thank you for all your thoughts and good vibes for my dad.”

Dr. Sanjay Khurana, a spinal surgeon who had been playing golf, told reporters he saw the plane clip a tree before coming down. He said he and others examined the pilot, who had suffered soft-tissue injuries, made sure he was stable and helped him out of the plane.

“We believe that he is going to survive,” NTSB Investigator Patrick Jones said at the scene.

The airplane landed right-side up and was largely intact, and it left gouges on the fairway.

Ford had just taken off, experienced engine trouble and was circling back to the airport when he crash-landed on the golf course, according to the NTSB, which is investigating the crash along with the Federal Aviation Administration. Such investigations typically takes two months, with a final report ready in about a year, Jones said.

Ford, a longtime aviation enthusiast who has even piloted helicopters in search-and-rescue situations and who owns several aircraft, is active with the Aircraft Owners and Pilots Association and the Experimental Aircraft Association.

He crashed a helicopter in the Lake Piru area near Santa Clarita during a training flight in 1999, and a six-passenger plane he was piloting in 2000 was hit by wind shear and crash-landed in Lincoln, Nebraska. He and his passenger emerged from that crash unhurt.

The plane that crashed Thursday is registered to MG Aviation Inc. of Camden, Delaware, according to the FAA’s online aircraft registry.

Thursday’s crash is likely to reinvigorate the debate over the future of Santa Monica Airport. Residents and some city officials have been pushing to close the airport, citing noise and safety issues. Federal authorities have insisted, however, that the city is required to keep it open.

Ford has allied himself with the effort to preserve the airport, contributing almost $26,000 to the campaign for a pro-airport ballot measure that went down to defeat in November, The Times reported.

Valerie Davidson, who has lived in Santa Monica for 25 years, told the newspaper that Ford “flies in and out of here all the time. He’s not a friend of the residents of this neighbor hood,” the 55-year-old Davidson, who lives one street away from Thursday’s crash site, told The Times.

Last year, Ford was seriously injured, suffering a broken leg on the set of “Star Wars: The Force Awakens,” delaying filming on the much- anticipated sequel. He is best known for playing Han Solo in three “Star Wars” movies and Indiana Jones in “Raiders of the Lost Ark” and its sequels.