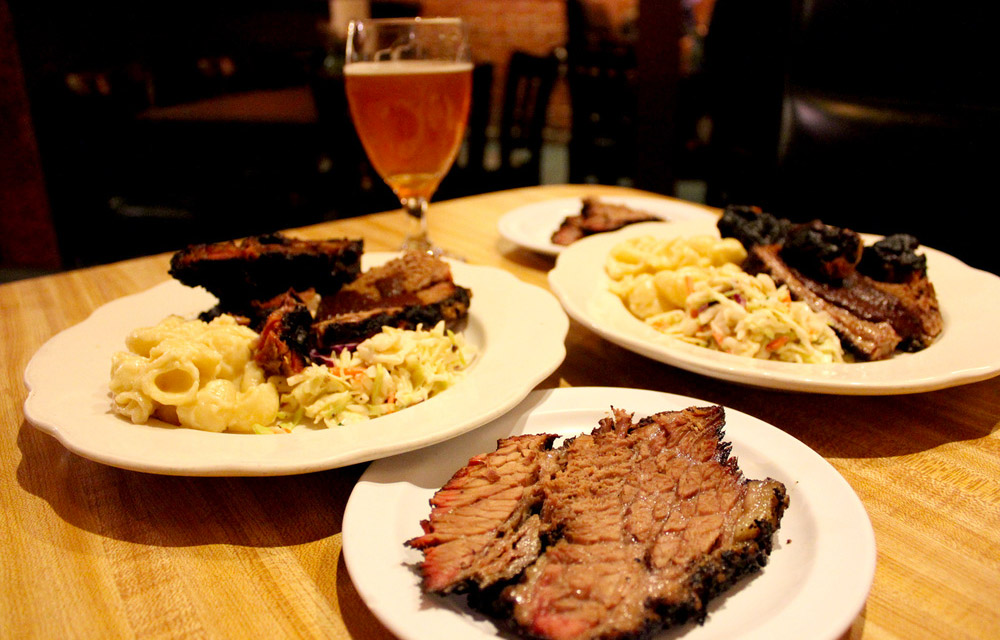 The just-opened Brick Smokehouse in Venice follows the trend of pop-up retailers with a new concept of a pop-in restaurant, where a sleepy café by day is transformed into a bustling neighborhood smokehouse by night.

Chef Glen Rogers traveled the country, from the Carolinas to Texas, sampling barbeque recipes and inspiring himself with the best-of-the-best before inventing his own BBQ sauce for his delectable menu of slow-cooked ribs, brisket, tri-tip and other all natural pasture-raised meats.

He serves them up along with soul food sides, made from fresh ingredients from local farmers markets.

Complementing a rotating menu of smoked meats, the restaurant serves a selection of hand-selected craft beers and wine.

For dessert there are fresh baked pies.

The atmosphere is down-home friendly and informal, with Rogers’ four-year-old son running around along with plenty of other kids and their families hanging out during the earlier evening hours.

Service is professional and efficient, including head server Danielle, an 11-year veteran of the business who glows when talking about the menu she herself can’t get enough of.

The spot is known to locals as the Brickhouse Kitchen, which serves breakfast and brunch, until Rogers and his smokehouse crew take over at 4 pm for the nightshift.

It’s open until 10 pm, but get there early while there’s still turkey legs and pie, which are known to sell out early on busy nights.

The Brick Smokehouse is located at 826 Hampton Avenue, at the intersection of Electric Avenue, just a block off of the bohemian chic Abbot Kinney food scene.