Right about now Tom Freund and Friends are taking the stage at The Del Monte Speakeasy on Windward to celebrate the release of their new CD “The Stronghold Tapes: Live In Venice, CA”. They will be playing until 1:30am or so!

Get on over there to check out Tom and friends including Brett Dennen, Amilia K Spicer, C.C. White, Heather Donavon, Steve Postell and Dj Josh Marcy. Who knows, last week Ben Harper sat in … maybe he will be back this evening!

“The Stronghold hit the spot. Venice really needed a music venue that was cool and undisturbed by the trendy and highfalutin, velvet rope and poser scene that has plagued parts of LA for years. 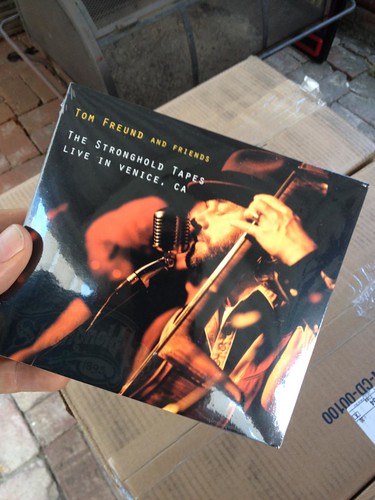 The Stronghold became a sort of Chat Noir if you will, a cabaret for artists to gather and express their ideas. It was a speakeasy for “our tribe” and a meeting point of common interest where the focal point was always THE MUSIC.

For a while, The Stronghold managed to stay under the radar, which in these modern times is not so easy to do. But for those in the know, it was the place to go. And those that knew grew and grew with folks stopping in from New York, France, Australia and Japan . . . the word had gotten out!

The avant-garde and bohemian was what the people were after in an ever homogenizing world, and in Venice, the battle took place on our main drag, Abbott Kinney Blvd. It started with the proprietors of The Stronghold Clothing Co. finding musicians on the street who were busking and asking them if they wanted a stage, a platform to perform. I was the first artist that was asked to do a weekly residency and thus was was born “Tom Freund and Friends Tuesdays” – a regular gathering for people to hear my band and I try out new material and jam with some special guests.

There was a circus like atmosphere to the scene, maybe something out of a Toulouse Lautrec painting or a Hemingway novel. The decor was that of a 30’s movie: Dust Bowl and denim with leather sofas and high wood-beamed ceilings; all of which made for great sound and ambiance. Many a photographer came as well, as you see from the images here.

We had the good fortune of having recorded the events from behind the stage most every Tuesday night, from December ’09 to May ’10, capturing this part of The Stronghold story. We preserved much of the ambiance of the room in the recording so you’ll hear a little conversation, and you can feel the movements of the dwellers – we are not precious here! We decided to make it a 2-CD collection with Side A featuring the full band experience and Side B breaking it down – mostly me solo with a couple players sprinkling in – the way we used to kick off our Tuesdays. Also, for those of you who might be concerned: don’t worry, no overdubs were hurt in these recordings!

And so without further ado, we bring you “The Stronghold Tapes: Live in Venice CA.”