Eric Garcetti will be the next Mayor of Los Angeles. Garcetti won yesterday’s election with 54% of the vote, beating out opponent Wendy Greuel. Garcetti was previously a member of the LA City Council. He holds a master’s degree from Columbia’s School of International and Public Affairs and was a Rhodes Scholar at the London School of Economics. Garcetti has also taught human rights and political science at USC and Occidental College. 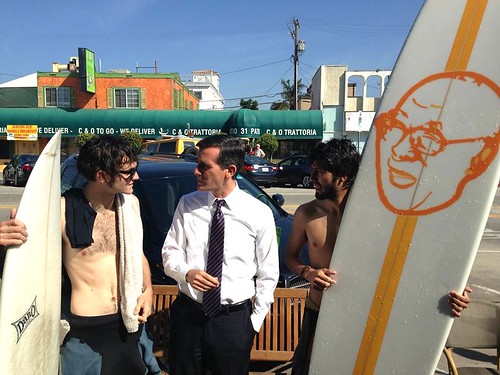 Garcetti at The Cow’s End

Last week Yo! Venice! asked then candidate Garcetti about a few issues that are unique to Venice. The question “talking points” are in bold, his answers after.

I am proud to be endorsed by both Councilmember Koretz and Councilmember-Elect Bonin and am on the record for supporting their efforts to address the negative impacts from Santa Monica Airport. As Councilmember, I proudly voted in support of the Rosendahl-Hahn-Koretz motion to alter the departure path and the Rosendahl-Perry motion on noise levels and flight safety. As Mayor, I will continue to work on airport traffic issues that affect Venice residents.

2) Getting housing for the homeless.

Los Angeles is the homeless capital of the nation with 23,539 homeless people. It is unacceptable for anyone to live without a roof, four walls, and a door.

I’ve proudly led reforms on the rent stabilization ordinance to protect tenants. Though state law limits any expansion of the RSO, I fought and won in the 9th Federal Circuit Court to expand the RSO to properties with HUD loans. I’ve stopped sham condo conversion evictions and substantially increased relocation amounts. I’m proud to have launched a partnership with the Public Counsel to cut red tape and help homeless veterans access services they have earned. We expand funding for housing by getting our fair share from the state and federal government and I will fight for this funding as Mayor.

As Mayor, I will not “manage” homelessness. I will fight to end it. I’ve pioneered in my district, housing that doesn’t just offer shelter, but offers the healthcare, mental health services, substanceabuse treatment, job training, and other tools people need to permanently get their lives back on track. It starts on the street — we don’t just count the homeless on the streets — we survey our communities and reach out to each one individually, to find out who that person is and develop a unique approach tailored for them.

3) Safety issues in Venice – A lot of our crime is due to transients. While everyone wants to help the homeless get housing, while waiting we get an undue amount of “crazies” so to speak.

Public safety is one of my top priorities. I am proud to have cut violent crime by two-thirds in my district, where I fought to bring foot patrols and video cameras and where I created UNTAG which helped cut graffiti by 80%. As Mayor, I will continue to find innovative ways to keep our neighborhoods safe, even during these times of economic hardship. I will also work to fight homelessness and find housing that offers wrap-around services including mental health services and substance abuse treatment as I stated above.

4) Retaining the character of Venice while also embracing the “new” Venice, aka “Silicon Beach” and all.

Angelenos deserve to have a city that treasures its past but also embraces the new and the future. As Councilmember, I have said that there is no one-size-fits-all solution to planning in each of the neighborhoods I represent. Venice has its own history and culture that needs to be preserved, but also has an emerging innovative tech community that is creating jobs and bringing economic development to the area. As Mayor, I will work to make sure that we grow this burgeoning tech sector while maintaining the character of historic Venice.

By Bret May 22, 2013
in Westside Wellness
Related Posts