After being diagnosed with colon cancer in 1996, bail-bondsman Doc Mishler moved to Choteau, Montana in 1998, where he read the bible and adopted the “cowboy” lifestyle. Declared cancer free shortly after, Mishler embarked on his first “long ride” in 2002. 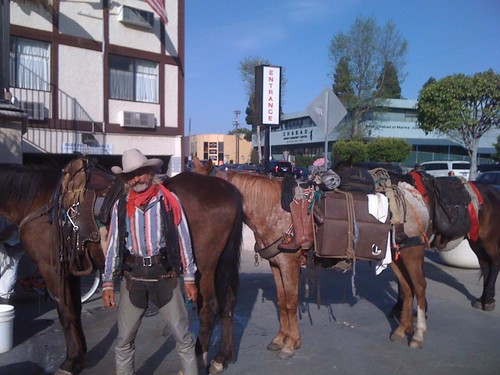 Doc Mishler and his three Tennessee Walkers at the Jolly Roger on Washington. Picture by Micky S.

His first ride took Mishler from Montana to California. He then headed east through Texas and ended the ride in Washington DC. Since then, Mishler has continued to travel the states “to raise awareness for children’s hunger”. During his rides, he relies on the good graces of others to put him up for the evening and provide monetary donations for the ride.

A quick search on the internet shows that some of the wandering cowboy’s tales may be made up or exaggerated, but that in general he is a nice guy that others would suggest putting up for the night. (The charming cowboy has 10 children with six different women.)

Mishler’s current “long ride” began in Florida in March of 2011. He has been spotted in Venice for the last week or so, as he takes day trips up and down the coast and into Hollywood. His travels can be followed on his Facebook page by clicking here.