“Crusade for Collecting” is on Abbot Kinney today in front of the Alternative Apparel store! They are scheduled to be there until 3pm, but as it is so nice out, maybe they will stay until later! 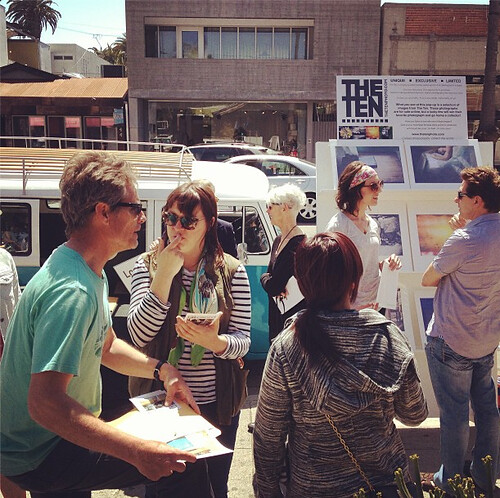 Crusade for Collecting is pleased to announce its inaugural national tour to begin late March 2013. A passion project of Jennifer Schwartz, of Jennifer Schwartz Gallery, The Crusade is a revivalist movement meant to encourage further public engagement with art and empower a new generation of collectors. Spontaneous pop-up galleries in cities across the USA will bring grassroots art appreciation to the streets, moving outside the traditional boundaries of the art world, and engaging those not inclined to seek out an art experience. The photography on display will be given away to those who connect with it, an act giving many their first opportunity to own original art and meant to turn on new audiences to art collecting. The Crusade provides a platform to discuss the importance of buying original art and supporting the artists who are creating it.

The campaign will be undertaken in “Lady Blue,” a 1977 VW bus funded through Kickstarter, who will serve as mascot, transportation and exhibition space. At each destination city, the bus will park in a busy public space and open for “business.” Meant to attract not only fans of the project, who can follow the tour and find locations through a variety of social media outlets, but also unknowing passers by. This guerrilla style exhibition is meant to reach the core of the nation’s public, allowing for spontaneous and genuine reactions to the available work and engaging people outside the normal art world audience.

Crusade For Collecting recognizes the skilled work of artists. The gesture of giving away art for free is meant to incite a pay-it-forward response and encourage future collecting by recipients. It is not a statement on the value of the available work, but rather an act of art awareness and empowerment.

About the Participating Artists

Additionally, To Be Announced local emerging artists of each participating city will be included in the pop up gallery space, and often be onsite themselves, allowing The Crusade to introduce locals to the art and artists homegrown in their own communities.

Founded in 2009 in Atlanta, the Jennifer Schwartz Gallery exists to promote photography and encourage en masse art collecting to further the medium. As the foundation for many diverse and innovative projects, the gallery seeks to rethink the traditional art sales model in an effort to engage a larger art audience. The Crusade for Collecting is the latest of these ground breaking projects, conceived in 2012 as a pop up gallery at the High Museum in Atlanta and a second successful pop-up in New Orleans.

Previous events include ArtFeast, a series of meals in which chefs pair a menu to a photographic exhibition, and Walk Away with Art, an event fusing the element of chance with personal taste where 50 invited guests drew numbers to determine the order they chose a photograph to keep. All of these events strive to facilitate a further and greater connection between artists and their communities, while developing a sense of agency and ability among young and emerging artists to sell their work and develop a sustainable collector base.