L&M Arts will host an opening reception for Louise Nevelson‘s “The 70s”, an in depth look at a diverse and defining decade of work by the woman deemed the “Grande Dame of Contemporary Sculpture”, this evening from 6-8pm. The exhibition will run until May 11th, 2013. 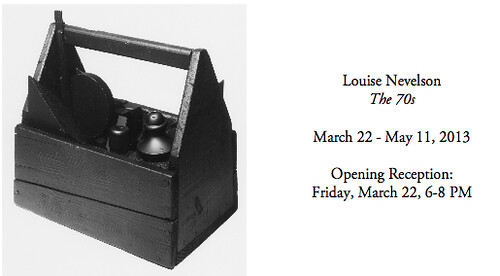 This extensive exhibition will include over thirty works described by the artist at the time of their making to be about the now, which have since matured over the past three decades to take on new and evolved relevancy. The first exhibition to focus solely on works from this era examines a culminating crest of her investigations into the relationship between elements, sculpture, and architecture to achieve her distinct material alchemy.

After Nevelson’s first major retrospective at The Whitney Museum of American Art in New York in 1967, her work noticeably shifted in tone and form. In his essay for the forthcoming monograph Louise Nevelson, slated to be released by Skira publishers in April 2013, art historian Germano Celant reflects on this charged period:

“from the 1970s, the continuity of the wall structures was broken down in pursuit of a discontinuity that emancipated the individual elements, separating them and making them autonomous and different, no longer contained in boxes…(they) seemed to come from an order that was no longer primitive, but rather cultured and mature, where verticality was a metaphor for the pride and presence that had been achieved.”

The 1970s were a time of unprecedented success for Nevelson: she participated for the second time in the Venice Biennale (1976), New York City Mayor Ed Koch named a downtown Manhattan park after her (1978), and President Carter honored her as one of five most important woman contributing to the arts in the United States. These accolades allowed her to pursue a new, larger scale for her work as a result of invitations for various commission projects. In addition, a steady stream of gallery and museum exhibitions afforded the opportunity to expand on her previous practice with increasing momentum. The works displayed in Louise Nevelson: The 70s present a holistic look into not only her artistic achievements, but also intellectual and aesthetic explorations at the time. Among the objects providing insight into these pursuits are Small Cities IX, 1978, a rare wooden ‘tool’ box; Untitled, 1971, an 89-piece intricate geometric wall sculpture; and a large-scale work that, like many of her commissioned works from the era, will be erected outside in the gallery’s garden.

The exhibition will also include a suite of fourteen collages by the artist known for her signature eccentric style. More often than not, Nevelson could be found draped in decadent furs over richly textured garments, her eyes heavily outlined in black pencil and a net of false eyelashes. She believed that aesthetics are a closed circuit; the current running from her intellectual perceptions to her personal style to her artwork fed a continuous dialogue. The 1970s proved a prolific period of collage-making for Nevelson, who, at the time, remarked on the subject, “I love to put things together. My whole life is one big collage. Every time I put on clothes, I am creating a picture, a living picture, for myself… I like clothes that are upholstered. I like that you build up your clothes…You can do it two-dimensionally, and every time I do it, when I go back to my work, I use that again.” Her collages are an integral component to a body of work deeply rooted in her distinct sensibility.

Louise Nevelson (1899–1988) was born Louise Berliawsky in Kiev, Russia and immigrated to Rockland, Maine at the age of six. After marrying Charles Nevelson in 1920, the couple settled in New York City. It was there that she enrolled in the Art Students League, studying under Kenneth Hayes Miller and Hans Hoffman. Over the next two decades she worked as an assistant to Diego Rivera as well as at the Sculpture Center in New York and Atelier 17. After the mid-1950s she began showing regularly in New York and abroad. Nevelson’s work can be found in nearly 90 public collections worldwide, including: Albright-Knox Art Gallery, New York; The Art Institute of Chicago; The Brooklyn Museum, New York; The Cleveland Museum of Art; The Corcoran Gallery of Art, Washington, D.C.; Dallas Museum of Art; Hirshhorn Museum and Sculpture Garden, Washington, D.C.; Israel Museum, Jerusalem; Los Angeles County Museum of Art; Centre Georges Pompidou, Paris; Tate Gallery, London; Walker Art Center, Minneapolis; and Whitney Museum of American Art, New York.