This past week we received some reputable tips following the interview on Jane Velez-Mitchell on HLN that made our independent investigation believe Raven may be in California but it was this past weekend after receiving a parking ticket from Venice, CA that led us to investigate the possibility that Raven was in Southern California. After communication with the Pacific Division of the LAPD in Venice that prompted Raven’s mom and step-father to fly immediately to Los Angeles. 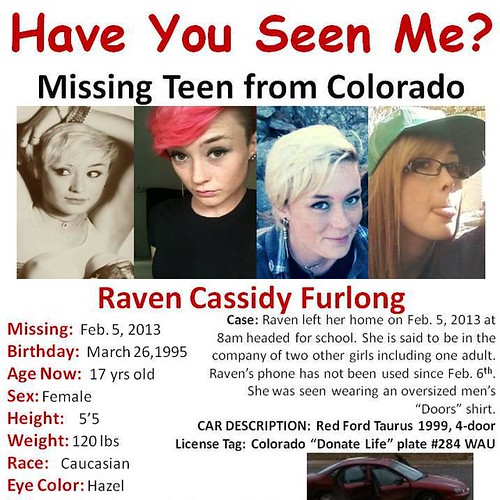 Sgt. Parks at the LAPD had someone watch Raven’s car until her mom arrived; for over 12 hours they sat and waited for their daughter to arrive, but at 9am this morning no one returned to pick up the car. We have no proof anyone has been with the car since 6pm Friday. Inside the car items found of Raven’s appeared as if she may be with the car, but the disturbing items belonging to others raised more issues and unanswered questions continue.

Tonight, Raven’s mom took to the airwaves again and did an interview with Fox Los Angeles resulting in some additional leads, however, still no Raven and those we want to question we won’t be able to until the morning.

Raven, if you see this please call your mom. If anyone knows of Raven’s whereabouts, please call 911 or 1-800-THE-LOST immediately.

There is a $1,000 reward for information leading to Raven’s whereabouts, if you would like to stay anonymous contact NWCAVE’s Missing Persons’ Division Director Shelley Shaffer at 360-852-8019 or email her at tips@nwcave.org

Click here to join the existing thread on this subject in the forums.