Wondering what all the police activity was in Venice earlier today? That was a police pursuit that started in Santa Monica. The SMPD and LAPD Pacific division caught both men, one of them at the Venice Breakwater. Good thing LAPD got those guys off the streets, check the video! 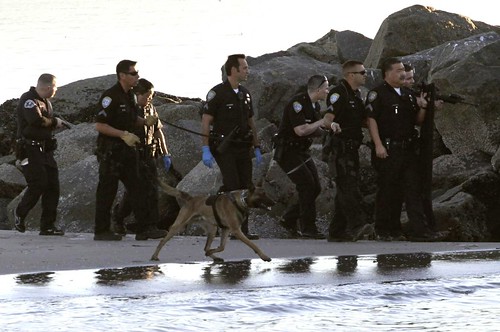 NBC’s website has not been updated to include the suspect getting caught at the Breakwater, but it should on their coverage at 11pm! Tune in!

Police received a 911 call about 2:15 p.m. reporting that a woman was being detained by Vons store security personnel on suspicion of shoplifting, according to Sgt. Richard Lewis.

While officers were on route to the store in the 1300 block of Wilshire Boulevard, two men allegedly waiting in the parking lot for the woman entered the Vons and brandished a firearm, possibly in an attempt to free the woman, according to authorities.

When police arrived, the two men jumped into a black Honda sedan and a pursuit began along surface streets, Lewis said.

About 3:40 p.m., the car pulled on to a side street near the Venice boardwalk and a passenger fled the vehicle.

After traveling through surface streets for about 10 more minutes, the driver pulled over near the intersection of Ashland Avenue and 25th Street, just north of the Santa Monica Airport. He exited the vehicle, took a drag on a cigarette and calmly sat down on a curb. Police took the man into custody.

Click here to continue reading the full story at NBC!